Last week, embattled East Baton Rouge Council on Aging (EBRCOA) director Tasha Clark Amar tried to counter the mountain of adverse publicity she’s generated in recent weeks with something of a public-relations campaign meant to beef up the popularity of the quasi-governmental agency she works for. A new hashtag, #WeAreMoreThanTaxes, was born.

“False and unsubstantiated accusations,” as in findings of the state legislative auditor, makes for a very droll bit of self-exoneration reminiscent of the Deedy Slaughter “I been witch hunt” campaign. But again, this is the launch of a charm offensive meant to convince all the mean people attacking Clark Amar and EBRCOA over little things like rigging an election to pass a tax doubling its budget, writing herself into a will and using taxpayer funds to build a partisan political machine.

And, as the Advocate noted over the weekend, using a disaster to profiteer for personal gain. It turns out that last year amid the August flood in the Baton Rouge area, Clark Amar and some of her EBRCOA employees raked in the overtime like there was no tomorrow.

The Council on Aging’s overtime payouts of $36,105 included $19,684 to the agency’s supervisors. That practice set off alarms in a recent Louisiana Legislative Auditor’s Office investigation, which noted salaried Council on Aging employees who normally do not qualify for overtime raked in extra cash as they helped to evacuate seniors, brought meals to the elderly and made sure their clients were safe during the floods.

Council on Aging CEO Tasha Clark Amar said in an interview that the Council on Aging only paid overtime money to salaried employees during the floods because the Federal Emergency Management Agency instructed them to authorize the payments. The federal agency paid for $12,585 of the supervisors’ overtime, the audit said.

Governmental agencies can apply for FEMA to reimburse part of their disaster overtime payments at the rate of the federal reimbursement for a disaster.

“We didn’t know what the other local agencies did,” said Amar, who pointed out that Council on Aging employees do not fall under the Civil Service regulations that apply to city-parish employees. “All we did was follow [FEMA’s] directions. We didn’t know if people were getting overtime or not. It’s not like we were calling other agencies and saying, ‘Are you getting overtime?’ We were working.”

The Council on Aging updated its overtime policy after the 2016 floods to reflect some of its “exempt employees” — usually the highest paid at the agency — could be paid time-and-a-half during “emergency situations” when approved by the CEO. Amar said they made the change at the bequest of FEMA for it to retroactively apply to the August floods.

Before September 2016, the Council on Aging’s overtime policy did not make mention of exempt employees, nor did it reference work during disasters. Instead, it merely said nonexempt employees would be paid time-and-a-half when they worked more than 40 hours a week.

But the May audit took issue with Amar’s explanation, saying it seemed unlikely FEMA asked for the policy change given FEMA’s own public assistance program policy guide says the federal agency determines overtime eligibility based on an applicant’s pre-disaster labor policy. And the FEMA employee who worked with the Council on Aging told auditors that she never instructed the council about overtime eligibility for individual employees.

Guess how many of the other local governmental and quasi-governmental agencies were paying overtime to their supervisory staff for flood relief work. Was your answer none? Give yourself a prize. Of course this one is the smelly kid in the class.

We love this quote. Just love it.

So the comeback to all this is as follows… 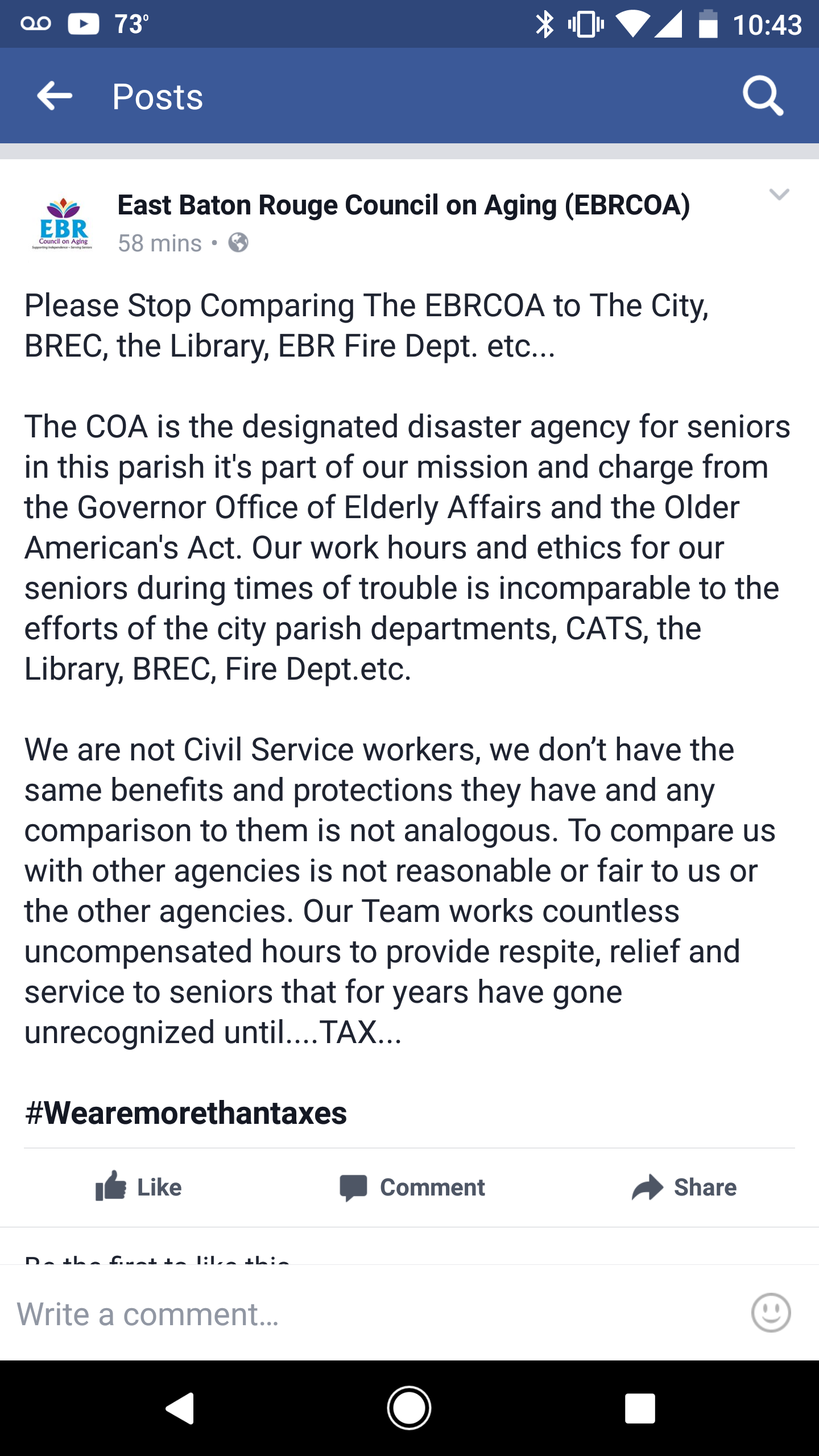 First, if the tax that the EBRCOA broke numerous campaign laws in order to push to passage at the ballot box is such a problem for Clark Amar and her gang, then maybe they ought to stop agitating for the Baton Rouge Metro Council to levy it and to discourage the Democrats on that council from walking out when actions on that tax are brought up. They snookered the voting public into a close vote in favor of $8 million a year worth of taxpayer swag – they ought to at least own it and stop acting like it’s a burden to them to have that revenue on the way (eventually).

And second, you don’t get to act like you’re some special agency which shouldn’t be judged by government rules when you’ve stuck your hose-pipe into the wallets of all the taxpayers in East Baton Rouge Parish. Legally, EBRCOA might be right about what they did with overtime. In the court of public opinion, the standard is a little different. Nobody is interested in paying extra taxes so that Tasha Clark Amar can decide to book overtime and pay herself $6,700 for what she says was 139 more hours than she usually works. It’s not like somebody from EBRCOA is going to check those numbers to see if they’re real, after all.

You make $101,000 per year. That means you don’t get to rake in overtime pay when it floods. The hourly employees do; you don’t.

So much for the charm offensive and the “Hey, we’re more than just taxes” narrative. Nothing about these people is worthwhile.

Interested in more news from Louisiana? We've got you covered! See More Louisiana News
Previous Article The Pelican Institute’s New Report Says If LA Wants To Grow Its Revenues, Kill Corporate Income Taxes
Next Article FAGAN: Is The Kenner City Council Fleeing From A Public Backlash Against Its UBER Ordinance?