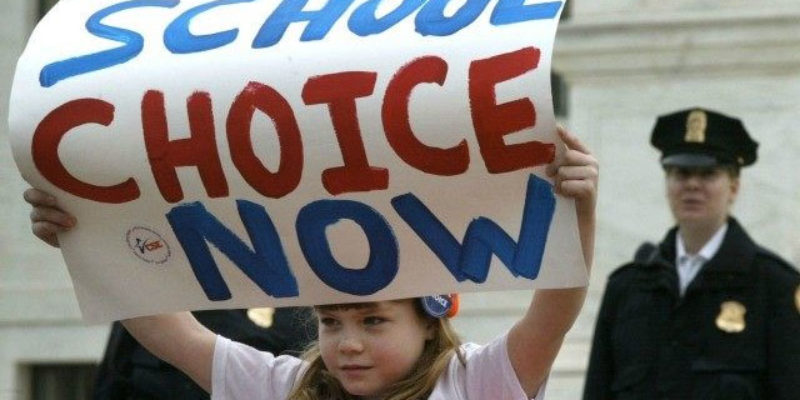 …at least that’s what a three-year Tulane study on the performance of kids getting vouchers released yesterday says.

In the long-running debate over vouchers, a report issued Monday says voucher recipients in Louisiana bounced back from dismal scores initially in math and English.

After three years those students were on par with public school students who tried and failed to land the assistance, according to a report by the Education Research Alliance in New Orleans.

State Superintendent of Education John White said the result of the review offer lessons for liberals and conservatives alike. White was part of a 75-minute panel discussion Monday on the report hosted by the Urban Institute in Washington, D.C.

Vouchers are state aid for students from low-income families who attend troubled public schools to move to private schools at state expense.

Around 7,100 students get the aid, and 87 percent are African American students, according to the study.

There had been a study done which “proved” that kids who switched out of traditional public schools to enroll in the Louisiana Scholarship Program and therefore attend a private school saw a big drop in performance in the first year relative to the average of the kids staying in those government schools (the control group was made up of kids who had applied for vouchers but lost the lottery and had to stay where they were), and this was trumpeted as a damning indictment of school vouchers. Another study showed that in the second year those kids did better, but still not as well as the kids who stayed.

This study shows that by the third year the kids are up to speed with the school they left.

That’s a little better time frame, and what it shows is kids whose parents opted to uproot them in an effort to drive a better education are generally at least getting them up to the average performance of the public schools within three years.

What would be interesting to know is what the seven-year data shows.

The kid who’s pulled out of a public school after 5th grade, for example, and sent to Catholic school on a voucher. How does that kid do after he’s had seven years to make friends, become acculturated, recognize the standard he’s expected to keep and so on?

We also don’t have any studies on voucher kids who started in private schools at the kindergarten level, because there’s no testing pre-kindergarten to establish a baseline for their performance vs. the government schools.

But this study’s showing that voucher kids perform at least at the same level as public school kids opens up something else worth noting.

Average tuition is $4,925 per year at voucher schools compared to $8,500 in government aid for public school students.

The $8500 is the figure inclusive of state and local funding to public schools in Louisiana. It’s not all of the funding those schools get; they also catch a couple of thousand federal dollars per student per year.

Bear in mind also that most of the private schools, and in fact the vast majority of the really good ones, don’t take voucher kids. Their tuition is a lot higher than $4,925 a year and they’re already full of students. Vouchers mostly put kids in less-established schools. Over time, the hope is you’ll create a marketplace in which you build some sensibly-priced private schools which can fill a hole and provide working-class and middle-class kids with an education competitive with the elite schools. That’s going to take time, and probably some more aggressive school choice reform policy than Louisiana already has.

What we’re talking about here is a nascent program producing these results.

It says we’re wasting lots of money on bad product. And that there’s a better way to do things.

Oh, and here’s something else released yesterday…

A second study released Monday found that special education students were more likely in voucher schools to lose their label and return to general education status. It wasn’t clear whether that helped or hurt students.

“If students are losing access to necessary resources because they no longer bear the disability label, these results are troubling,” the researchers wrote. “If, instead, public schools are over-identifying students as needing additional services when they actually do not, avoiding or removing the label of a student with a disability may be helpful and even an attraction of private schooling to parents.

In lots of cases, special ed is a scam. You’ve probably heard of the “crazy check,” in which getting a kid diagnosed with some malady that would enable the parents and the school to slap a special-needs designation on him triggers a shower of federal dollars on both. What we find is that private schools don’t play the “crazy check” game like the public schools do.