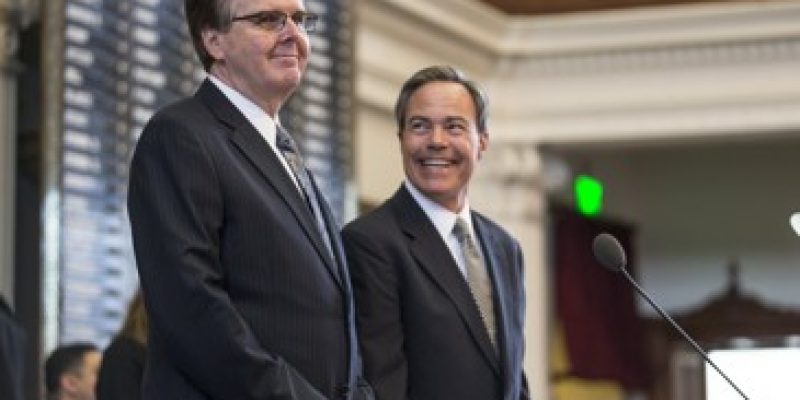 Speaker Joe Straus and Lieutenant Governor Dan Patrick have never been perfectly in alignment regarding their ideology or their legislative goals. This year, however, has taken their feud to a new level.

The two were not expected to agree, but with goals of the governor on the table, it was expected that the two would find some way to get those goals passed through both chambers and put onto Greg Abbott’s desk. However, in the 2017 session, Straus and Patrick escalated their fight to such a fever pitch that the goals for the regular session were put into jeopardy, thus underscoring the need for a special session.

Most observers of this feud are acutely aware of Patrick’s fervent support of “the bathroom bill” and how Straus has an equally fervent disdain for the bill. In May, Straus declared an end to the bill, stating, “For many of us, and especially for me, this was a compromise. As far as I’m concerned, it will go no further.” Patrick pushed back on this narrative as he normally did when Straus displayed his opposition to the bill, but the animosity did not stop with Senate Bill 6. The gridlock that ensued in the regular session was readily apparent as bills piled up without further action being taken. The budget was no exception to this conflict as Straus charged that the Senate GOP’s approach to the budget was essentially “cooking the books” and was similar to Enron.

When the dust settled on May 29th, the day that Texas’s general session ended, it became apparent that multiple legislative goals had not been met. By June 6th, Governor Greg Abbott declared that he was dragging lawmakers back to Austin for a special session- with a laundry list of legislative goals that numbered twenty in total. Out of this list, all items are legislative goals previously set out by officials at the start of the general session that, as a result of Patrick and Straus’s feud and the gridlock that followed, now must be tackled in yet another session that begins on July 18th.

Straus and Patrick, however, have not signaled that their feud will end. In fact, since the announcement of a special session, the two have amplified their fight, particularly over the “bathroom bill.” Straus was recorded by the New Yorker as saying that “I’m disgusted by all this. Tell the lieutenant governor I don’t want the suicide of a single Texan on my hands.” Patrick shot back that “obviously no one wants to see harm to anyone as a result of any legislation that is passed.” The insinuation that Patrick and any lawmakers that voted for such a bill would be at fault for LGBT Texan suicides is the most acidic remark made by the two as of yet and doesn’t set a good tone for the special session that has yet to begin.

The feud, until it is settled, will continue to threaten the legislative priorities set out by the governor. These goals are ones that are incredibly important to Texans, with unaddressed topics such as school finance reform, school choice, property tax reform, mail-in ballot fraud, and other pertinent priorities that now stand to be thrown to the wind due to this constant animosity between the Speaker and Lieutenant Governor. Even Abbott is irritated with the lack of accomplishment, noting in his special session announcement that “a special session was entirely avoidable, and there was plenty of time for the legislature to forge compromises to avoid the time and taxpayer expense of a special session.” However, it appears that even after the governor called another session and essentially called out the two in his statement, Straus still isn’t willing to budge, insinuating that the special session priorities were similar to horse manure in a joke given in a speech to educators at the Texas Association of School Boards’ summer leadership institute.

The rhetoric must stop. Texas cannot endure constant gridlock every session simply because one or both sides, equal in power, must have it their way. After all, both leaders in the Texas legislature should be able to find some sort of common ground, if not in ideology, then at least in their service to the state of Texas. Straus and Patrick must find a way to work together, if not for finding a compromise to get their individual priorities through, then for the good of the people of Texas who stand by and wait for legislation that may never come as a result of a Texas-sized rivalry.