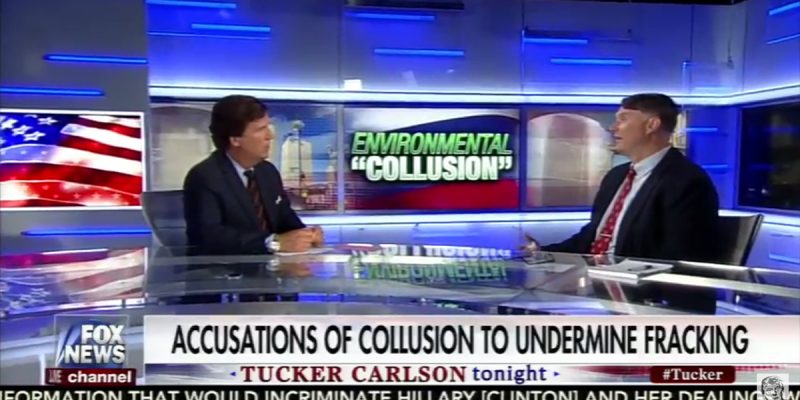 Below you’ll see an interview Tucker Carlson did with our old pal Kevin Mooney, who at one time worked with the Pelican Institute and is now an investigative reporter for The Daily Signal, which is the Heritage Foundation’s news site. Mooney has been working on a story involving Russian meddling which has far, far more meat on its bones than this expansive, gassy narrative about President Trump and some supposed collusion involving the elections.

According to Mooney, whose information comes largely from a congressional investigation headed up by Rep. Lamar Smith (R-Texas) and Rep. Randy Weber (R-Texas) who chair House subcommittees involving energy, it’s the Russian government which is in collusion with large segments of the environmentalist crowd fighting the oil and gas industry over the practice of hydraulic fracturing, or fracking.

Here’s the interview, with more details below it…

Mooney’s Daily Signal report which appeared Monday can be found here. An excerpt…

The sources include a former secretary-general of NATO, who is quoted by the GOP congressmen as saying:

This anti-fracking campaign seizes upon environmental issues and health concerns that could be used to constrain U.S. drilling and fracking exercises, the letter explains.

It is easy to see the benefit to Russia and Gazprom that would result from a reduction in the U.S. level of drilling and fracking—a position advocated for by numerous environmental groups in the U.S.

Smith, chairman of the House Committee on Science, Space, and Technology, joined Weber, chairman of that panel’s energy subcommittee, in calling on the treasury secretary to investigate whether Russia works with American environmental activists to prevent the U.S. from developing its natural gas resources.

As Mooney noted in the Carlson interview, even Hillary Clinton, when she was Secretary of State, recognized there was a Russian hand behind some of the anti-fracking movement.

This is nothing particularly new, of course, and we’ve seen the insidious involvement of foreign actors both in the environmental movement in general and with the anti-fracking community in particular. After all, the Matt Damon film Promised Land, which amounted to little more than a propaganda broadside against fracking, was funded by the United Arab Emirates. The movie got killed at the box office, but it generated a good bit of media attention and so the losses it took were writeoffs for the Arab sheikhs who wrote the checks – it’s not that they wanted, Chili Palmer-style, to get into the movie business, they wanted to manipulate the American people into abandoning oil and gas drilling techniques which would destroy the status quo in the world energy market. And so you had collusion between Arab oil and gas sheikhs and American environmental nuts to make an anti-fracking propaganda film.

But while the Arabs are threatened by the introduction of widescale American oil and gas to the export market – given the size of the American demand, energy independence alone would displace OPEC’s market share in ways that would destabilize their economies and the governments which run their oil and gas industries – nobody is more concerned about fracking than the Russians are.

One of the elements of Trump’s speech in Poland last week which was most significant was the president’s reference to helping the Poles find “alternative sources of energy.” It might have been tempting to assume he was talking about windmills and solar panels, but that wasn’t it at all. What Trump was talking about was selling Poland liquified natural gas from American tankers loading it up at export terminals in Lake Charles and Port Arthur and other such places. It turns out that Poland has significant natural gas reserves in its own right; perhaps enough for the Poles to get into the export market.

In other words, he was talking about taking away market share from Gazprom, which has a stranglehold on the natural gas market in Europe.

There is more to this as well. Western Europe has shale gas, though perhaps not quite in the quantities we have in North America. If the French, Germans, Dutch, Danes, British and others were to throw off the environmental movement’s influence and begin working to develop those reserves it would hit the Russian economy hard.

Understand – the Russians produce very, very little that anyone would want. They have oil and gas, and they have tanks and planes, and that’s about it. Their manufacturing economy is horrendously poor. If something were to happen to disrupt their energy exports to Europe, that country would be destitute.

Rather than attempt to diversify their economy, the Putin regime is falling back on its roots and using political manipulation to keep the game rigged in its favor. And there are American and European leftists willing to be manipulated along those lines because of their self-professed environmental concerns – as though those concerns wouldn’t logically extend to drilling practices on the Arabian peninsula or in the Siberian tundra. What results is real collusion between Russian bad guys and American bad guys – not the media-manufactured “collusion” filling up the pages of the Washington Post and New York Times.

For more on this, it’s well worth your time to read the letter Smith and Weber sent to Treasury Secretary Steven Mnuchin asking for a full investigation. See it here.

Interested in more news from Texas? We've got you covered! See More Texas News
Previous Article Reports: Steve Scalise Released From Intensive Care
Next Article Mitch Landrieu’s Cousin Convicted Of A Felony After Pulling A Gun On Someone