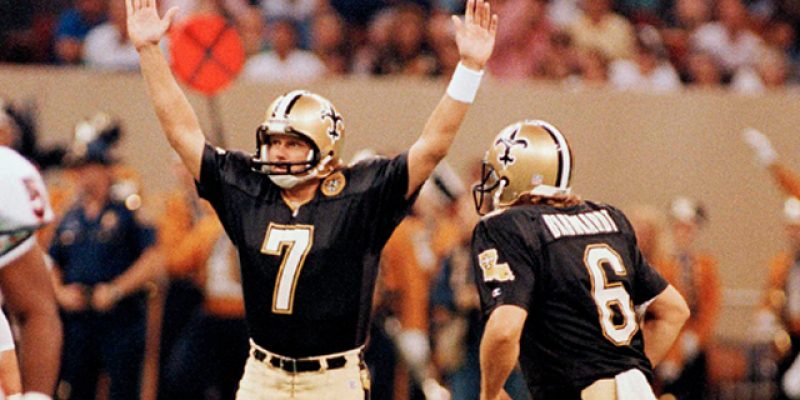 In the Big Game the Who Dat Nation experienced an elevated level of schadenfreude (if you don’t know what the word means, look it up, you’re going to be hearing the term a lot in the 2017 NFL season) when the Atlanta Falcons suffered a spectacular meltdown for the ages after the New England Patriots overcame a 25 point deficit to win the championship in overtime.

And on the eve of Super Bowl LI, kicker Morten Andersen, one of the New Orleans Saints’ greatest players and native of the Kingdom of Denmark, was announced as an inductee into the Pro Football Hall of Fame in Canton, Ohio.

The NFL’s all time leading scorer with 2,544 points had to wait until his fifth year of eligibility to “officially” get his ticket punched to the hall due to football’s disgraceful contempt for kickers and punters.

While punters and kickers are not built like most of the other players on the field and are not regularly subjected to the same physical punishment as their teammates, there’s no question that these special teams players can have a big impact on the game.

Ray Guy was so skilled at his craft by determining opponents’ field position that the punter was considered a part of the Oakland defense.

In an interview with the Los Angeles Times, football legend John Madden said that he used Guy as a “confidence builder” for his quarterbacks, reasoning to them if they didn’t convert on third down then they could count on Guy to put the opposing offense far on the otherwise of the field.

The Great Dane will be only the second “career” kicker inducted, the other being his fellow Nordic Jan Stenerud, who was born in Norway.  Guy is thus far the only punter in the hall, and his induction didn’t take place until 28 years after the Raider hung up his cleats.

While the great Ray Guy indirectly helped win games for the Raiders through “field position”, Andersen directly won games as a kicker.  Thirty-five of them to be exact.

His most important game winner was for the second team he played for: the Atlanta Falcons.

Andersen booted a 38-yard field goal in overtime in the 1998 NFC Championship game to propel the Falcons to their first Super Bowl.

While wearing a fleur-de-lis, Andersen’s big kick was a game winning 24-yard field goal with two seconds in regulation over the Los Angeles Rams on New Year’s Eve 1990, a score that would send the Black and Gold on to only their second playoff appearance.

Adding to the electricity of the moment was that Andersen’s previous attempt had been blocked though because one of the Rams was offsides, the Great Dane got a second shot at it.

In addition to his fellow 2017 inductee class which includes quarterback Kurt Warner, Dallas Cowboys owner Jerry Jones, and running back LaDainian Tomlinson, Andersen will join the Saints franchise’s current three-man contingent in the hall- all of whom had a connection with Andersen.

Linebacker Rickey Jackson, a longtime teammate of Andersen’s, was inducted in 2010.  Jim Finks, the man who served as general manager of the Saints during most of Andersen’s time with the team, was inducted in 1995, mostly for his miracle work turning around the perpetually unsuccessful organization.  Offensive tackle Willie Roaf was drafted by the Saints during Andersen’s penultimate season with the Black and Gold.

Andersen’s departure to the ATL in 1995 marked the beginning of the end of the Jim Mora Era in New Orleans as most of the team’s core from the late eighties had already gone.  Joining Andersen out the door of Airline Highway after the 1994 season was linebacker Sam Mills, punter Tommy Barnhardt, and nose tackle Frank Warren.

Mora lingered only a year and a half later, resigning in the midst of his nadir as Saints coach during the 1996 season.

It’s very likely that Andersen will be the last “true” Saint player inducted into the hall until quarterback Drew Brees scores his first ballot election five years after he retires, whenever that is.  Or perhaps guard Jahri Evans after his third year of eligibility.  Either way it’s going to be a while.

Tillykke Morten on a long overdue honor and tak for contributing so much to your team, the New Orleans area (particularly Children’s Hospital), and for your oft-shunned peers on special teams.

May your induction remind folks that the game is called FOOTball for a reason.

Interested in more news from Louisiana? We've got you covered! See More Louisiana News
Previous Article Who’s Endorsing Whom In Some Of The Big Races This Fall?
Next Article WAGUESPACK: Does The Governor Actually Have A Plan To Solve The Fiscal Cliff?