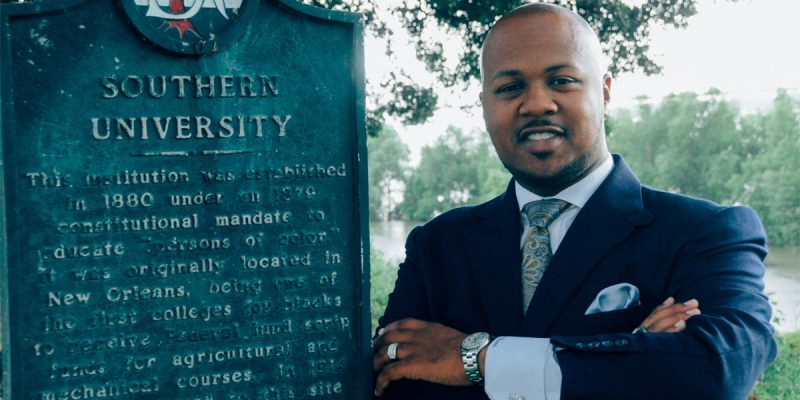 Our readers probably won’t forget Brandon Dumas’ name for a while, given the show the former Southern University administrator and East Baton Rouge Council on Aging board chairman put on as he was setting his life on fire earlier this summer.

Dumas, as it turned out, was breaking state law by serving on the board of the EBRCOA while living outside of the parish, and he was presiding over a veritable fountain of corruption within that agency as its director Tasha Clark-Amar was busy writing herself into the will of one of its elderly clients after running roughshod over state campaign laws in angling to pass an $8 million tax in order to fund what’s little more than a political machine. But those were mere appetizers; the main course came when Dumas was discovered to have published a sex tape of an extramarital tryst between himself and a former Miss Southern on a porn site.

That led to his dismissal as Southern’s Vice Chancellor for Student Affairs, a decision made by Ray Belton, the school’s chancellor.

Belton almost assuredly did the right thing, but no good deed goes unpunished…

The ongoing saga between Southern University and former employee Brandon Dumas is far from over.

Dumas, who was fired from an administrative post he held at the university last month over allegations concerning a sex tape, today sued the university’s board of supervisors, alleging that he was improperly terminated.

In court documents, Dumas argues that Southern University President-Chancellor Ray Belton acted unilaterally to terminate him, though Belton is not authorized to do so. The lawsuit contends Belton can simply make recommendations about personnel actions against non-academic, unclassified employees. The board must act on those decisions.

Dumas, who’s also the former chair of the East Baton Rouge Council on Aging, claims the board failed to follow its bylaws and regulations when it emerged from a closed session at its meeting last month after discussing the circumstances surrounding his termination.

The members, the lawsuit says, did not properly put forth the motions to grant or deny Dumas’ termination appeal and did not act properly to uphold Belton’s decision.

Dumas is seeking a temporary restraining order and preliminary injunction precluding the board from terminating his employment.

Janice Clark is the judge whose political machine, managed by her daughter Tasha Clark Amar, runs out of the Council on Aging that Dumas was the chair of.

No conflict of interest there at all, right?

Janice Clark was the judge in her daughter’s defamation suit against the family of the old woman in whose will she inserted herself. It took forever to get Clark to recuse herself from that one.

We can’t wait to see how long it takes to extricate her from Dumas’ suit. This will be a lot of fun.