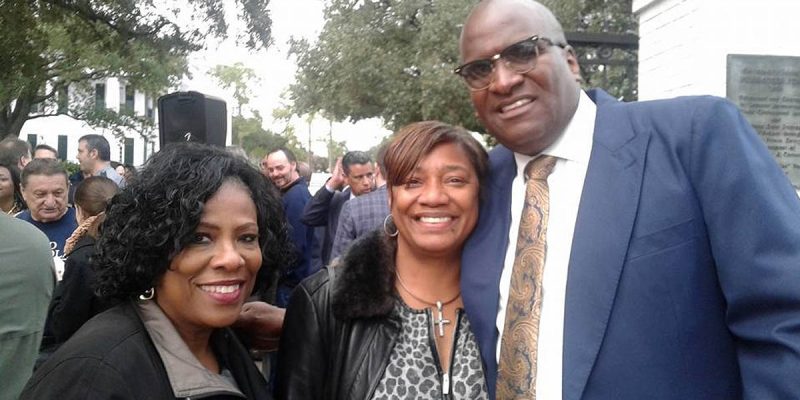 …on public safety to look for solutions. This should be a great comfort to the people of Baton Rouge as we dodge the fusillade of bullets being fired from the city’s more kinetic neighborhoods, and Mayor Sharon Weston Broome surely ought to be congratulated for…whatever it is she’s doing about the problem.

On Tuesday, Mayor-President Sharon Weston Broome held a press conference to discuss the sharp increase in violent crimes in the Baton Rouge area.

Mayor Broome held the conference alongside a number of officials, including Interim Police Chief Jonny Dunnam and District Attorney Hillar Moore. Majors from the East Baton Rouge Sheriff’s Office were also in attendance in lieu of Sheriff Sid Gautreaux.

At the conference, the mayor acknowledged a steep increase in homicides and says the city is taking immediate action to combat the rise. According to Chief Dunnam, Baton Rouge has seen 57 homicides so far this year, compared to last year’s 22 at the same point.

Chief Dunnam added that violent crime as a whole is also on the rise.

“It’s not from lack of effort. Our officers are working overtime,” the chief said.

The mayor says there will be open lines of communication between the sheriff’s office and BRPD going forward. She added that she’s reactivated her “Public Safety Transition Team” to organize new ways to solve crime.

Mayor Broome also hopes to start a clean up initiative to target blight in all neighborhoods and aims to offer more help for troubled youths in the area.

BRPD is working overtime because BRPD has a force of some 630 police officers when it ought to have 900. This is something which tends to be a major problem when the department’s morale is at an all-time low owing to a common perception that the mayor is more interested in making political allies of the criminal class than defending the law-abiding and standing with the police.

But since Broome has reactivated the Public Safety committee of her Transition Team, it’s worth revisiting that committee’s work, n’est-ce pas?

Over the past several years, East Baton Rouge Parish and the City of Baton Rouge have been faced with several public safety challenges, organizational shortcomings and communication barriers between agencies. Dwindling or stagnant government funding has halted and limited most every agency’s ability to address and improve staffing issues, structural deficiencies, and general community needs. Despite the prevalent difficulties, East Baton Rouge continues to provide excellent City-Parish public safety services, upholding the positive integrity and reputation of the capital city.

The Baton Rouge Police Department handles some of the city’s most difficult and controversial public safety matters, while juggling the challenges of a limited street patrol staff, outdated fleet vehicles, a dilapidated prison facility, and technological inadequacies. Despite these challenges, the police department has found successes with minority officer recruitment and retention within the department and has thrived in implementing and maintaining the BRAVE program initiatives in high-crime areas. The Baton Rouge City-Parish murder rate is lower than it has been in years, and community events, such as Boo with the Blue, have proven effective in increasing positive community/department relations.

Meaning they need more money. Not much of a shock there, though it wasn’t exactly a great moment in prognostication to brag about the murder rate being down thanks to the BRAVE program when just a few weeks later you were dismantling it and turning it into a honey pot for political payoffs.

The Public Safety Sub-committee’s overall suggestions to Mayor-President Broome include fostering a relationship and open communication lines between the mayor’s office and that of law enforcement in the City-Parish; encouraging community-agency engagement; supporting funding initiatives that allow for the hiring of new personnel and purchasing new and needed equipment; advocating for our youth through allocation of resources and time; and investing in technological improvements and advances. This committee believes in the potential of our community to overcome the numerous public challenges and to, in turn, set the standard in the state of Louisiana. Through ongoing collaborative efforts with the Mayor-President’s Office, it is possible that the public safety agencies of City-Parish will meet and expectations as well as create a legacy of excellence in public service during this administration’s leadership.

Yeah, those communication lines sure got fixed, didn’t they?

You can read the whole thing here, with the public safety piece starting on page 49 and continuing to page 53. Essentially it makes three recommendations – first, better lines of communication, which we now assume meant firing the old police chief and hiring somebody who looks more like the mayor to replace him, given in particular the list of applications for the now-open police chief job, second, more personnel with what appears to be an emphasis on bureaucrats who can process prisoners in the jails faster, and third, essentially more police cars and a new jail.

Not exactly a revolutionary set of recommendations here. These are the people Broome says she’s “reactivating” to help fight crime in the city as the bodies pile up.

Our readers will forgive us for not seeing much in the way of visionary leadership to solve this problem.

Just once – just once! – it would be nice to hear these people demand that the citizens who are described as “at-risk” to live the criminal life choose not to do so. Just once it would be nice if Sharon Weston Broome would tell the criminals she was coming for them, and that they were going to stop victimizing the law-abiding citizens of Baton Rouge and specifically the citizens of the city’s rougher neighborhoods or else she would become their worst nightmare, and then propose specific action to back up that threat.

But none of that was forthcoming today. Instead we got a little cheerleading, the promise of some more meetings to talk about the problem, a plan to let some more contracts for midnight basketball tournaments and a good deal more pabulum about “communication lines.” In other words, absolutely no leadership at all.

If you come to the impression that Baton Rouge is as dead as the bullet-riddled corpses piling up in its bad neighborhoods, you’re not unreasonable in doing so. The rotten leadership is more effective at killing the city even than the crooks and thugs are.

Interested in more news from Louisiana? We've got you covered! See More Louisiana News
Previous Article VIDEO: Schroder Is Out With A Web Ad, And It’s Pretty Well Done
Next Article FAGAN: How Would You Rule In The Case Of The Death Of A Child Left In A Minivan?