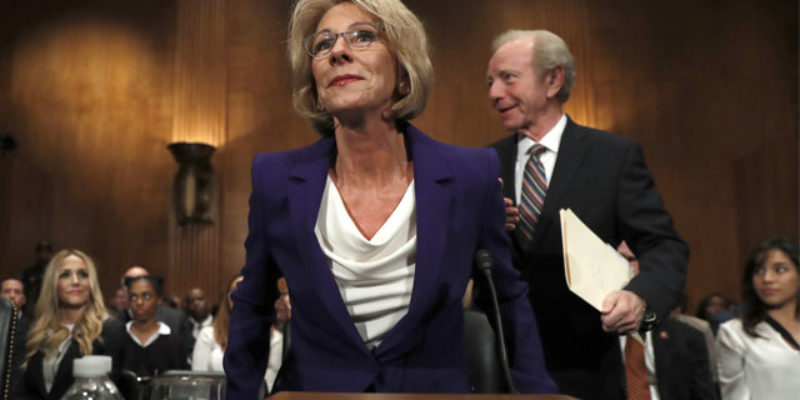 You may recall that in 2011, the Obama Administration issued the so-called “Dear Colleague” Letter to all colleges and universities subject to Title IX (i.e., all schools receiving federal funding).  Title IX, which prohibits discrimination on the basis of sex in education, was broadly reinterpreted to require that schools utilize the lower “preponderance of the evidence” legal standard for student disciplinary cases involving alleged sexual misconduct and discouraged schools from allowing accused students to cross-examine their accusers.

Obama’s revision to Title IX law was without precedent.  Previously, colleges and universities had traditionally utilized the higher “clear and convincing” evidence standard in student discipline cases, which tended to compensate for the lack of procedural due process protections inherent in the truncated nature of college administrative proceedings.  Although many universities had backed off from that standard by 2011, nobody dreamed that Congress had intended, via Title IX, to mandate the standard of proof required for student discipline in higher education.

At the time, the “Dear Colleague” letter was widely condemned as an example of executive overreach.  It was neither law nor regulation; it was not passed by Congress and did not go through the normal process for approving federal regulations, which involves notice and comment.  Rather, it was issued as informal “guidance” even though it was a major reinterpretation of existing law, and a reach at that.

To put it glibly, the “Dear Colleague” letter promulgated a highly dubious interpretation of federal law intended to unreasonably stack the deck in favor of accusers in sexual misconduct cases, and it did so using an improper mechanism that sidestepped legal channels.

What’s interesting is what happened three days later, on September 25, 2017, when the Sixth Circuit ruled in Doe v. University of Connecticut that public universities violate the rights of accused students when they deny them the right of cross-examination (at least in “he said, she said” cases):

The Due Process Clause guarantees fundamental fairness to state university students facing long-term exclusion from the educational process. Here, the University’s disciplinary committee necessarily made a credibility determination in finding John Doe responsible for sexually assaulting Jane Roe given the exclusively “he said/she said” nature of the case. Defendants’ failure to provide any form of confrontation of the accuser made the proceeding against John Doe fundamentally unfair.

“The right to cross-examine witnesses generally has not been considered an essential requirement of due process in school disciplinary proceedings.” However, general rules have exceptions, and “the very nature of due process negates any concept of inflexible procedures universally applicable to every imaginable situation.” The more serious the deprivation, the more demanding the process. And where the deprivation is based on disciplinary misconduct, rather than academic performance, “we conduct a more searching inquiry.” “Disciplinarians, although proceeding in utmost good faith, frequently act on the reports and advice of others; and the controlling facts and the nature of the conduct under challenge are often disputed.” For the student, “[t]he risk of error is not at all trivial, and it should be guarded against … without prohibitive cost or interference with the educational process.”

The Sixth Circuit’s ruling further demonstrates the horribly flawed nature of Obama’s policy and the wisdom of rescinding it.  While public colleges and universities should have some flexibility in dealing with allegations of sexual misconduct, they should not be empowered to create kangaroo courts that allow accused persons virtually no ability to defend themselves, all while applying the lowest possible standard of proof.  In fact, to do so is a violation of students’ constitutional rights.

Interested in more national news? We've got you covered! See More National News
Previous Article This Fall, We’re Going To Do A Series Of Posts Called 20 For 2020…
Next Article Well, Graham-Cassidy Died…