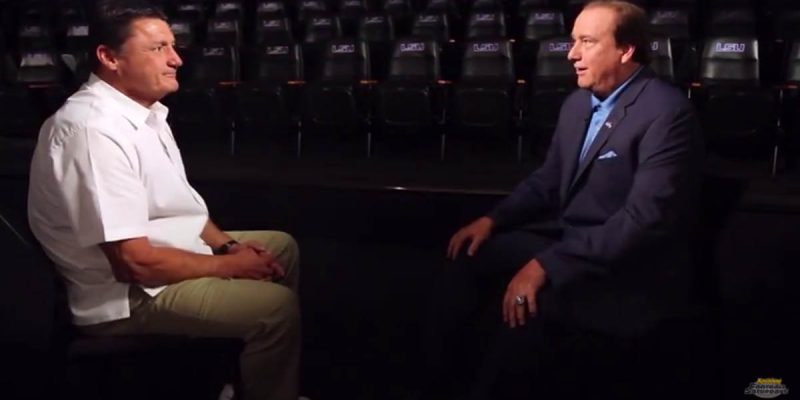 Seeing as though last night the college football season began in earnest and seeing as though tomorrow night the LSU football season will finally open in the Superdome with the Tigers taking on BYU, we figured it would be a worthwhile Hayride post to offer this. It’s an interview that Havoline Football Saturdays host Tim Brando did with Ed Orgeron, who starts his first full season as the Tiger head coach tomorrow night.

Although the college football world doesn’t seem completely sold on Orgeron as a home run hire to return LSU to an even keel with Alabama atop the SEC West – most predictions have LSU third in the division behind the Tide and Auburn, though by the national rankings LSU is ahead of everybody in the conference but Bama – what comes out of the interview, largely because Brando comes out and says it, is that everybody seems to think it’s a really cool story that Orgeron is LSU’s head football coach. After all, here’s a guy from Cut Off who went to South Lafourche High School, and had it as a lifelong dream to play at LSU only to quit the team two weeks in out of a bad case of homesickness and a not-so-great fit on the roster. But the love for LSU never left him, and when he got into coaching the lifelong dream became plying his trade back in Baton Rouge.

Which he’s now fulfilled, but of course Orgeron can’t just get the job to make the dream truly real – he has to succeed at it. So far he’s 6-2 as the head coach, with five of those wins coming as the interim coach and the last one, the 29-9 win over Louisville in the Citrus Bowl, coming after he got the job.

Orgeron is personable, he’s enthusiastic, he’s pure Cajun and he lives and breathes football. Lots of LSU fans weren’t crazy about the hiring process which got him the job and were looking for a bigger name to succeed Les Miles in Death Valley. But how can you not root for Bebe to kick ass at LSU?