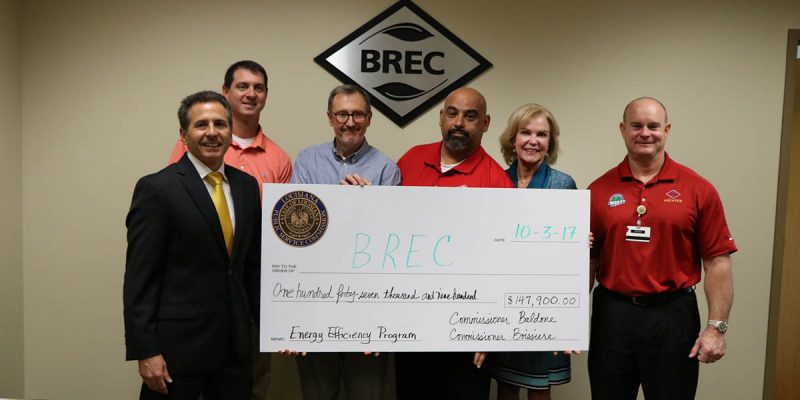 This story might be a little “in the weeds,” as is a lot of what the Public Service Commission does. It’s obscure and it’s a little complicated. But we think our readers will nonetheless get a kick out of what the PSC’s new member Damon Baldone, who’s running (badly) for re-election after having been appointed to his job earlier this year by Gov. John Bel Edwards, is up to.

First of all, in the image above that’s Baldone in the suit on the left. Yes, he’s short, but that’s not why we’re here.

What he’s got is a big whiteboard set up to look like a check from the Public Service Commission, and he’s bringing it around to local governmental agencies in his district. Here’s another example… 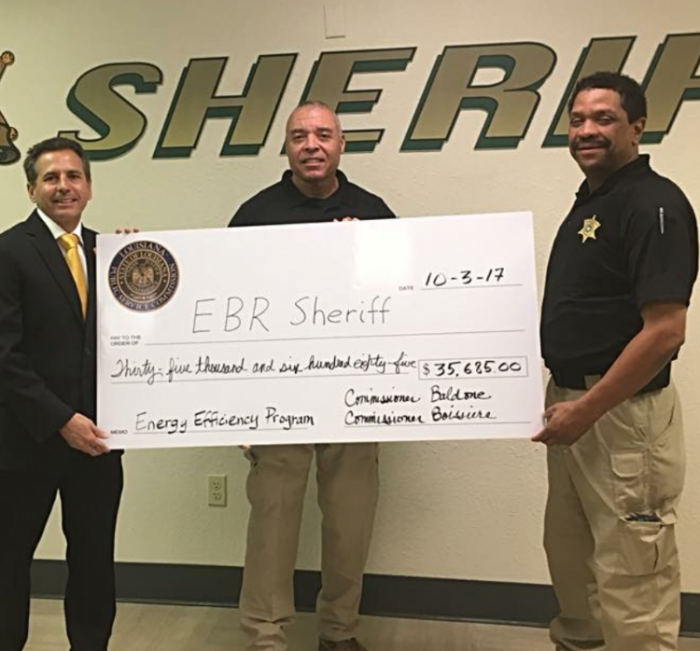 There are some people less than excited about this, particularly since it has the PSC’s logo on it.

And also because it’s a lie. Baldone isn’t distributing any money to these people.

What’s going on here is that the PSC has an energy efficiency program in which the utility companies are mandated to invest in projects promoting power-saving infrastructure. Where governmental entities are concerned, how this works is the government agency, let’s say the East Baton Rouge Sheriff’s office, approves a contractor to go to the PSC with an estimate on things like lighting or insulation upgrades, and when the PSC signs off on it, the utility company pays the contractor. The contractor then monitors the project with test meters to prove the energy savings are being realized.

So for the government agencies in question, the money they’re making comes from savings on the light bill. And it most assuredly will not be the number on Baldone’s fake check.

We’re not even sure where those numbers on those checks even come from. He can’t estimate with any degree of clarity what the savings these local governments are going to realize will be, and we’re told the project values on some of these don’t conform to reality – not that it would matter, because nobody is paying BREC or the sheriff’s office out of this program anyway.

How he came up with this little stunt is a fun little thought exercise. Our guess is it’s a good example of the old saw that if all you have is a hammer all your problems look like nails. Baldone is, among other things, a trial lawyer – and in that business, a lot of your marketing consists of taking happy pictures with clients who just caught a check from the insurance company. So he figured he’d stage the same thing with the PSC.

We’re told he tried to do this stunt in Zachary and was instructed to go away.

Baldone’s time on the PSC has been entertaining, if unproductive. He promised Edwards he wouldn’t run for re-election when he was appointed, and no sooner did he get the job he welched on that promise, which irritated Edwards so much that he refused to endorse Baldone. This is a former Democrat state representative and there are no Democrats in the race – Craig Greene and Lenar Whitney are the other two candidates, and they’re both lifelong Republicans – so it’s a remarkable display of pique that Baldone isn’t getting that endorsement.

There’s somebody else who isn’t endorsing Baldone. That would be Foster Campbell, the long-time Democrat blowhard on the PSC whom Edwards backed for the Senate last year. And why isn’t Campbell behind Baldone? Probably because Baldone wasn’t behind Campbell when, at the first meeting of the PSC after Baldone’s appointment back in June, Baldone voted not for Campbell but for Eric Skrmetta as the commission’s chairman.

Campbell was a little miffed about that. These pictures, from the garage at the venue for the meeting in June, show a rather spirited little tete-a-tete between the two… 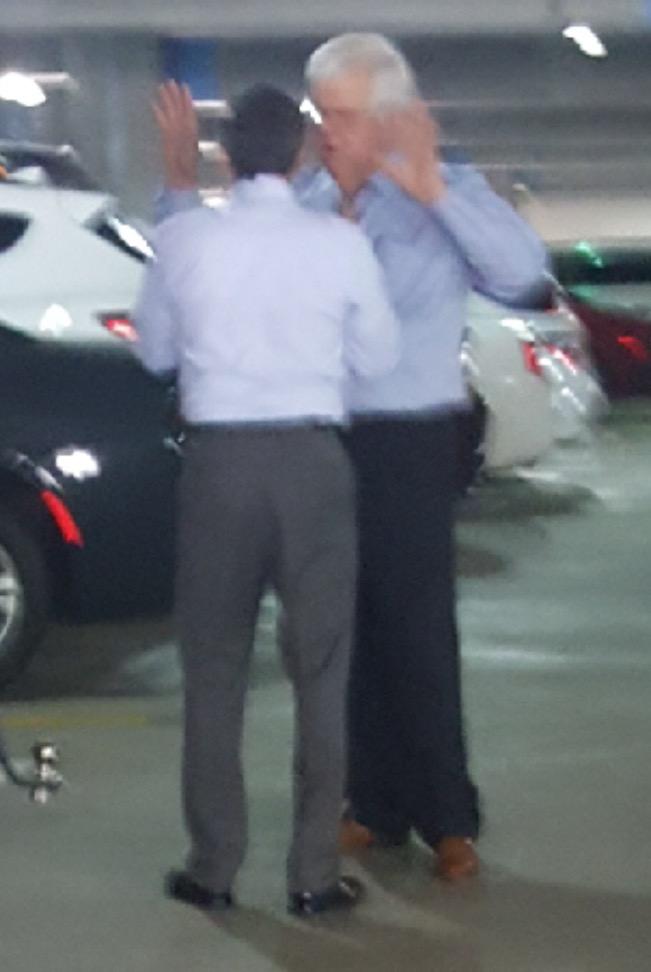 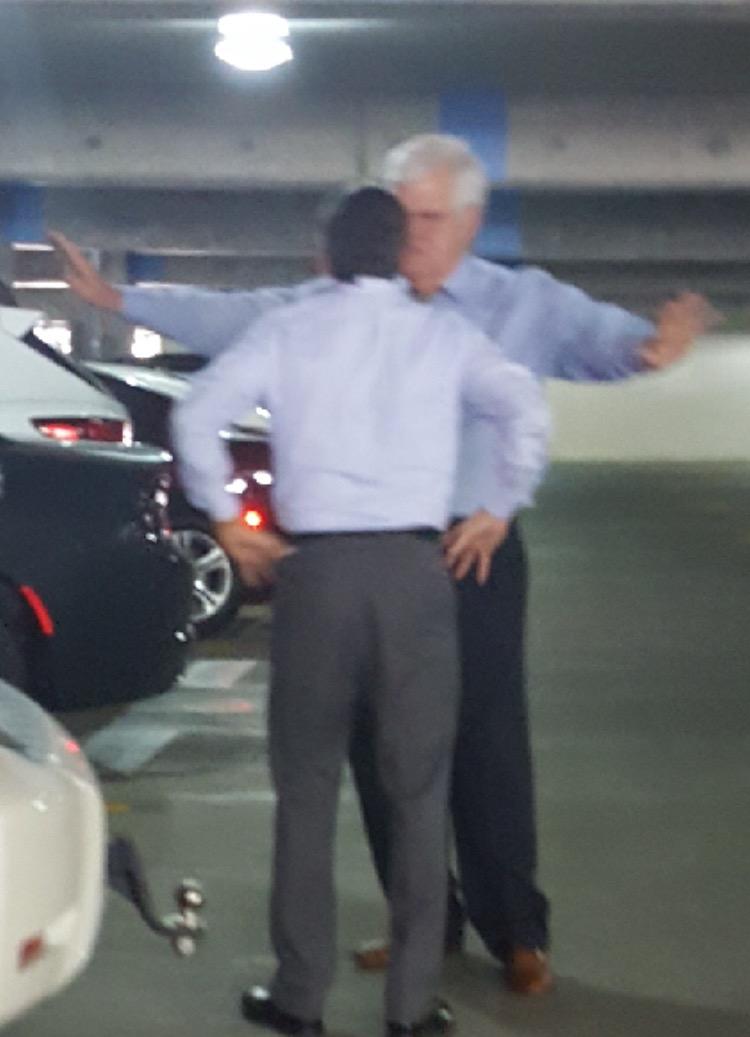 Like we said, Baldone is short. Campbell is no giant himself and he towers over the little guy.

The grapevine says Baldone knows he’s going to get killed on Election Day but he’s OK with that, because what he’s really doing is keeping his name out there so he can run for the state senate in 2019. We don’t really understand that, since usually to get elected it’s helpful not to look like a clown in the public eye.

But what do we know, right? Maybe he’s making all the right moves after all.

Interested in more national news? We've got you covered! See More National News
Previous Article Yes, Chauna Banks Has Been Living Out Of Her Campaign Account, And No, It’s Not Racist To Notice
Next Article A Federal Judge Just Sprung Dollar Bill Jefferson Out Of Jail