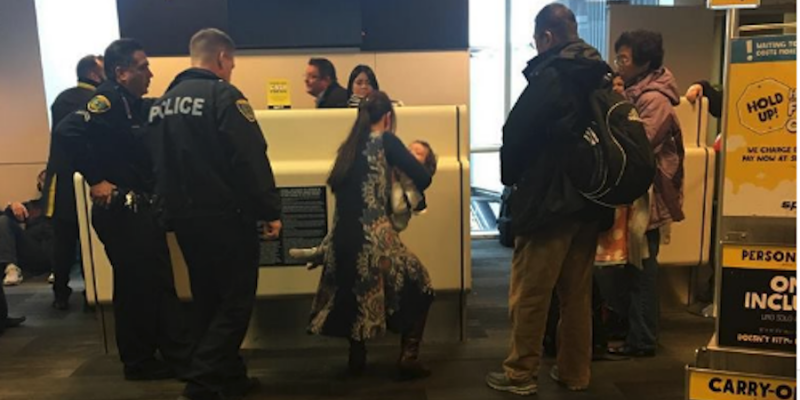 Mei Rui, a Houstonian musician, was thrown off of a Spirit Airlines plane– because of her crying toddler– and for breastfeeding. Yes, you read that correctly.

She was on her way to perform in a recording session in New York that had been scheduled for months and involved 400 cancer patients. She posted on Facebook that she missed the event:

because they threatened me that the “FBI would get involved if we insisted on boarding the plane.” The most devastating part is how traumatized and scared Lukas and my parents were during this brutal ordeal.

She wrote that this entirely unnecessary experience was worse than surviving the record-breaking flooding of Hurricane Harvey. Her two-year old son, Lukas, and her elderly parents were traumatized from the “brutal ordeal.”

Another passenger on the same flight, Holly Barton, posted in Instagram:

Absolutely DISGUSTED with how this woman was treated on my flight this morning leaving IAH. After a 3.5 hour DELAY where we were stuck on a plane for a majority of the time (and had to get off and re-board) this woman’s child started to cry and not want sit in his seat. Flight attendants were so rude to her and tried to kick her off, even though the plane wasn’t moving or even about to move. After the woman refused to get off, they made everyone get off the plane for a SECOND time only to not allow this woman to get back on. Does Spirit not understand that 2 year olds cannot sit still in a seat belt for 3+ hours? He was well behaved for the first two hours, but does that not count? Was calling the police necessary? Fuck you, Spirit. I’m one of the FEW advocates out there for you, but not after witnessing how POORLY your employees treated this woman. I will never fly Spirit again. #spiritairlines #spirit #SHARE #neverflyspirit — with Spirit airlines at George Bush Intercontinental Airport.

This is what happened according to Rui’s Facebook post and videos she and others recorded of the incident:

This is the whole story: my family (my baby son who turned 2 this week and my aging parents with severe heart conditions) just got kicked off Spirit Airlines flight 712. The reason was “non-compliance with crew instructions.” As you see in the video, nobody would tell us exactly how we had violated the airline regulations. The only “non-compliance” is that my son was crying for 25 minutes straight after I force-buckled him into the airplane seat. He had previously flown over 30 times internationally and domestically without any problem, but as a lap child.

After a three-hour delay due to “insufficient de-icing solution” to thaw the ice on the plane and having to deplane and re-board everyone, I was nursing my exhausted baby (we woke up at 3 am for the early flight, as I have a very important recording session in NY this afternoon) as a crew attendant approached me and asked me to stop nursing him and buckle him in his seat. Since the plane hadn’t finished re-boarding, and the doors were still open, I politely asked for a couple more minutes so I could finish nursing him. She waved for another flight attendant to come. I explained to them both that giving me a couple more minutes to finish nursing him would prevent him from crying and disturbing the other passengers. Seeing that I did not stop breastfeeding him promptly, they went back and at that point must have called the captain. I didn’t want to cause any trouble, so I immediately pulled my son off and forced-buckled him into the seat, which set off uncontrollable crying for the next 25 minutes to the great dismay and earache of everyone on the plane. (More videos available upon request.)

The crew came back (baby had been strapped in the seat for over 20 minutes at that point) and asked us to leave. We said that we haven’t violated any regulations and asked why? They left, and at that point must have called the police.

My parents and my young son are completely traumatized from this experience. All we want is an explanation, for why we were kicked off the plane, and what exactly we were “non-compliant” with, after complying and buckling my son into the seat and keeping him there for the entire duration until asked to deplane.

I have time-stamped videos of my son buckled into his seat right before being kicked off the flight to prove that we were fully compliant with airline regulations.

Anyone interested in complaining about how this woman was treated can contact Spirit Airlines and George Bush International Airport.