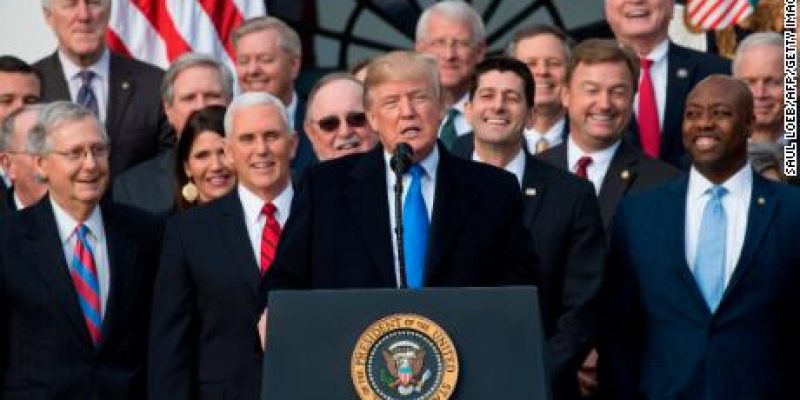 Voters made a calculated decision regarding economic policy last November when they elected Donald Trump, the billionaire businessman, to lead the United States rather than former Secretary of State Hillary Clinton. The effects have been clear: from election night 2016 onwards, the United States economy has roared to its highest levels in years, with a slew of records set since President Trump’s inauguration.

For the first time ever, the Dow Jones index rose 5,000 points in a single year. The GDP has been revised for the fourth quarter to an increase around 4 percent. Home sales have hit an 11-year high. Consumer confidence is at its highest levels in 17 years. The unemployment rate for minorities and overall are at their lowest levels in decades, and 171,000 new manufacturing jobs have been created this year, resulting in a manufacturing unemployment rate of 2.6 percent.

However, for months, the media and the Democrats have insisted that the economic growth has nothing to do with Donald Trump, his economic policy, or any thing of the sort. They insist that this growth came from Obama-era policies that engaged in stringent regulation, higher taxation, and what was anemic growth of the economy.

Donald Trump and the Republicans are now set to turn the Democrat narrative about the economy even further on its head. For the first time in 31 years, the United States will see real, substantive tax reform after the tax reform bill that the GOP and Trump have heralded for months will be signed by the President later this week. History shows us that tax reform is a boon for the U.S. economy, and it’s no surprise that this reform will have the same effect. This bill will lower taxes for the vast majority of citizens, but will not stop there. It will also lower the corporate tax rate from the absurdly high rate of 35 percent to 21 percent, giving a boom to industry and providing for a greater economic roar.

If you listen to the Democrats, one would discover a different point of view on the tax bill. Rather than support a plan that would put money back into the pockets of citizens, the Democrats are calling the tax reform bill a “monumental, brazen theft from the American middle class” and according to Politico, claiming that the American people will be lucky to survive the effects of the bill. Nancy Pelosi claimed on the House floor before the chamber’s final vote on the bill that the reforms would “hand a breathtaking 83 percent of its benefits to the wealthiest 1 percent of Americans.” However, Pelosi’s criticism of the bill couldn’t be further from the truth. To begin, there’s no denying that this bill will provide tax cuts, not increases, to the vast majority of citizens in the United States, and furthermore, the wealthiest members of our country will not receive “83 percent of its benefits.” In fact, the number that is closest to reality is that of 47 percent; 47 percent of the savings from the bill will be received by middle-class Americans. Doesn’t that sound a little different from the song that Nancy Pelosi has continued to sing at every turn?

The Democrats also insist that corporations will turn around and provide financial windfalls to their stockholders over their employees following the bill’s passage. Instead of providing higher wages and investing in their workers, corporations are set to simply shove their employees to the side and feed their greedy investors. Once again, that narrative is completely false. Today, companies have declared their intentions to use the financial gains from the tax bill to help their workers succeed. Wells Fargo and Fifth Third Bancorp are raising their minimum wage rate to $15 due to the cuts. Comcast and AT&T are giving a $1,000 bonus to their employees in response. Boeing is investing $300 million in “employee-related and charitable investment” that will support charitable giving, workforce development, and infrastructure enhancements.

This tax bill, along with Trump’s policy of deregulating business in America, are completely revising the economic narrative of American politics. Rather than weigh down business and be content with a struggling economy, Trump has put forward substantive economy policy in order to make America great again as he promised.

However, Trump has an even greater chance to affect the economy that tends to be looked over. While the tax bill and deregulation has been at the forefront of news cycles for weeks, Trump has a greater ability to leave a lasting impression on economic policy through appointments to the Federal Reserve Board of Governors. The Federal Reserve, which is our central bank that implements major economic policy such as raising and lowering interest rates, is headed by a seven-person Board of Governors. Out of these spots, there are currently five vacant (or soon-to-be-vacant) positions on the Board. While it’s easy to look at these spots and just blow them off as regular appointments, it’s important that we do the opposite. Governors on the Board of Governors hold their positions for 14 year terms. While many decide to retire prior to their term’s expiration, these positions have lasting effect on economic policy for potentially a decade and a half, transcending the election cycles that plague so many other appointments. Rather than being just another presidential appointment, these positions are basically an economic version of Supreme Court justices; they make major economic decisions for the nation that can last for a generation.

The President in office is typically able to appoint two of these governors in their time as President; President Trump has had a chance to name six, of which he has named three (Randal Quarles, who has already been confirmed; Jerome Powell, a current governor, to fill the Chairman spot; and Marvin Goodfriend). That is nearly the entire Board. Should Trump act quickly and get all six spots filled, Trump’s conservative economic vision for America will stand at least for a generation. While Jerome Powell may not be able to continue on as chair should a Democrat be elected president, it’s hard to remove governors that are able to remain in office for 14 years.

Democrats may believe that they have the upper hand since Trump was inaugurated. However, while elections can change the composition of American government, not all consequences of elections can be undone. The Democrats may one day find themselves at the top again in America; however, it seems like Donald Trump will certainly leave a lasting economic impression on America that cannot be so easily destroyed.

Interested in more national news? We've got you covered! See More National News
Previous Article It Looks Like The Sewerage And Water Board Is In Trouble With The Feds
Next Article SCALISE AND CASSIDY: Tax Reform Is A Big Boost For Louisiana