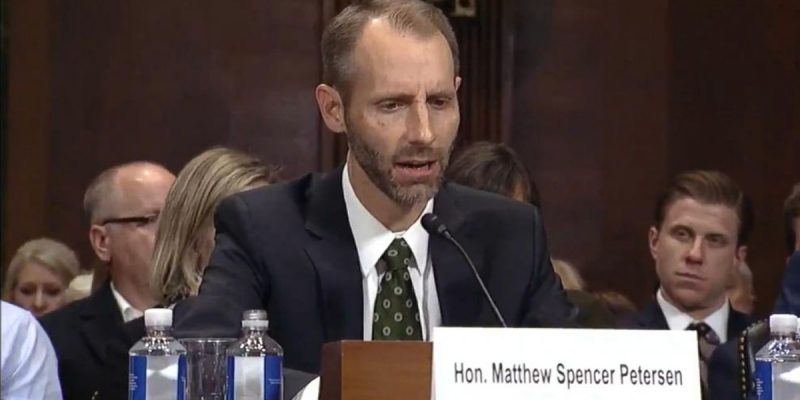 UPDATE: Petersen withdrew from nomination on Monday, proving what an effect viral video can have on a career.

Kennedy said on WWL-TV this morning that President Trump is cool with the video you’ll see below. “The president and I get along fine, and he has told me, ‘Kennedy, when some of my guys send somebody over who’s not qualified, you do your job,” he said.

ORIGINAL: If you didn’t see this last week, it’s video from the Senate confirmation hearing for Matthew Petersen, who was nominated by the Trump administration for a district judgeship for the DC federal court. Petersen completely bombed at the hearing, and the most poignant part of his bad performance – which in all likelihood will have sunk his nomination – came when he was examined by Louisiana’s junior senator John Kennedy.

It needs to be stipulated that Petersen isn’t a complete moron, though he was made to look like one in the clip above. Petersen was a 1996 magna cum laude graduate in philosophy from BYU, and he was a law review graduate from the University of Virginia law school in 1999. He spent three years as an associate at the DC law firm of Wily Rein, specializing in elections and campaign law, and then three years working for the U.S. House of Representatives as its counsel for the Committee on House Administration, and then in 2005 was hired as Republican chief counsel for the United States Senate Committee on Rules and Administration.

Following that, Petersen was named to the Federal Election Commission in 2008. In 2010 and again in 2016 he’s been the chairman of the FEC.

Somebody on Trump’s team who picks judges saw Petersen as a potential win in terms of having someone on the federal bench who could do something about the runaway abuses of campaign law that we’ve seen over the past decade. In that context he could be a terrific pick.

Kennedy is correct that it’s his job as a senator to vet judicial nominees. And he’s also correct that a federal judicial nominee who can’t describe what a motion in limine is (for the non-lawyers, a motion in limine is a motion a lawyer will make before a judge seeking to exclude evidence from the view of a jury) or who can’t rattle off a definition of the Daubert standard, which is the standard for qualifying an expert witness, is a nominee who’s going to have trouble making a case for his own qualification.

My background is not in litigation…And I understand, and I appreciate this line of questioning. I understand the challenge that would be ahead of me if I were fortunate enough to become a district court judge. I understand that the path that many successful district court judges have taken has been a different one than I have taken. But as I mentioned in my earlier answer, I believe that the path that I have taken to be one who’s been in a decision-making role in somewhere between 1,500 and 2,000 enforcement matters, overseen I don’t know how many cases in federal court the administration has been a party to during my time.

What he’s saying is that from his time on the FEC he’s “judged” tons of matters which amount to legal cases. And that’s certainly a worthwhile point in his favor.

Still, Kennedy afforded Petersen the opportunity to present himself as having a working command of basic trial procedure questions – and Petersen blew it. He needed to be a lot better prepared than that, and now he’s a viral internet superstar for all the wrong reasons.

And so is Kennedy for his cross-examination of Petersen. Which suits the Senator just fine.