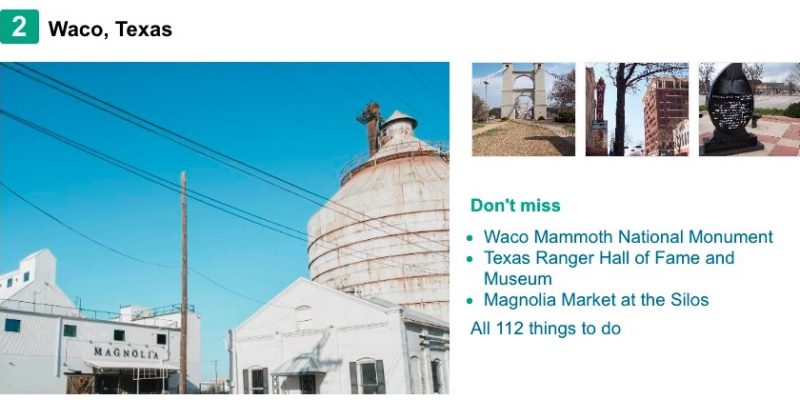 There is only one Texas town that made it onto TripAdvisor’s “top destinations on the rise–United States” list this year, and it’s Waco, Texas. Waco was listed #2 behind the number one spot, Kapaa, Hawaii.

The travel site considered its customers’ “search and booking interest, as well as increase in positive traveler review ratings” to determine its top ten list of American cities. It lists three top destinations for each city listed. Waco’s includes Waco Mammoth National Monument, Texas Ranger Hall of Fame and Museum, and Magnolia Market at the Silos, as well as 112 “things to do.”

According to the Houston Chronicle, fans travel from all over to Waco to visit the store, which has over 4,000 visitor reviews on Google alone. Visitors can plan a trip that includes following a self-guided tour of a map of the homes the couple fixed that were featured on HGTV.

Other attractions are the Dr. Pepper museum and the Cameron Park Zoo.