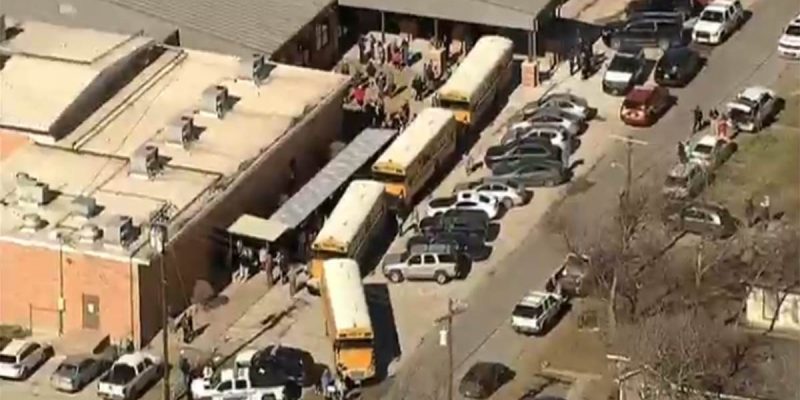 Yesterday morning parents in Italy, Texas, a town roughly 45 minutes south of Dallas, received a text message from the School Superintendent, and a parent’s worst nightmare– about a high school shooting.

We have had an active shooter incident at the high school campus this morning. The shooter is in custody and law enforcement has control of the scene. There has been one victim that has been transported to the hospital. All junior high and high students are safe and will be transported by bus to Stafford Elementary for dismissal after police approval.

The shooting occurred at around 8 am CT in the school cafeteria. The Associated Press reported that there were no confirmed injuries and specific details were unclear. Local reports indicated that a 15-year-old girl had been shot and her condition was unknown. The shooter is a 16-year-old boy and it remains unclear if he knew her.

The shooter, who is in police custody, is described by a fellow student as having a “history of aggressive actions.”

Cassie Shook, a 17-year-old junior, told the Associated Press (AP) that she was angry when she found out who the suspect was because she’d complained about him at least twice to school officials, including the vice principal.

“This could have been avoidable,” she said. “There were so many signs.”

She first complained when she learned that the boy had made a “hit list” of eighth grade students, which included her. Last year she said that police came to the school after the boy acted violently in class: he threw a pair of scissors at her friend, and later, a computer against a wall. Shook told the AP, “I ran out of the classroom screaming, telling everyone to hide because I was scared.” Police spoke to class members after the incident and the boy was removed from school, but was allowed to return.

According to the 2010 census, Italy, a small town in Ellis County, has a population of 1,863 people. Dubbed the, “Biggest Little Town In Texas,” Italy’s school district has roughly 600 students.

Ellis County Sheriff Chuck Edge said that the suspect fired several shots from a semi-automatic .380 handgun. Investigators stated that they don’t know the motive yet or what the relationship was between the victim and the shooter. They also don’t know where he got the gun or what charges he might face. The victim’s condition is unknown, as the hospital will not release information about her.

The suspect fled the scene and was arrested by law enforcement officers on school grounds who took possession of his handgun.

Last night, roughly 300 people came together to pray for the victim and their community at Italy’s Central Baptist Church.