“He lies every time he opens his mouth.” That was Rep. Alan Seabaugh’s characterization of Gov. John Bel Edwards Friday morning when the former appeared on KEEL 710 AM in Shreveport to talk about the special session which opens today in which there will be a major push to raise your taxes.

Seabaugh is one of Louisiana’s more adamant opponents of tax increases, mainly because as he says in the audio clip below he doesn’t believe Louisiana has a budget deficit. Instead, he says Edwards has a wish list of spending items larger than Louisiana’s taxpayers can pay for, and refuses to trim that wish list down to match what the tax base can provide.

Any tax increase will need a two-thirds vote of both houses in the Legislature in order to go to the governor’s desk. Seabaugh is correct that there is no consensus on any of those tax increase plans to be debated in the special session – we wouldn’t be surprised to see all of Edwards’ ideas for “replacing” the one cent sales tax hike which is set to expire in June with, essentially, tax increases on business die in the House Ways and Means Committee by the close of business on Thursday.

Nevertheless, there is a letter circulating with the signatures of the Democrats in Louisiana’s Senate on it encouraging a tax increase as a “compromise” measure. Here’s the letter… 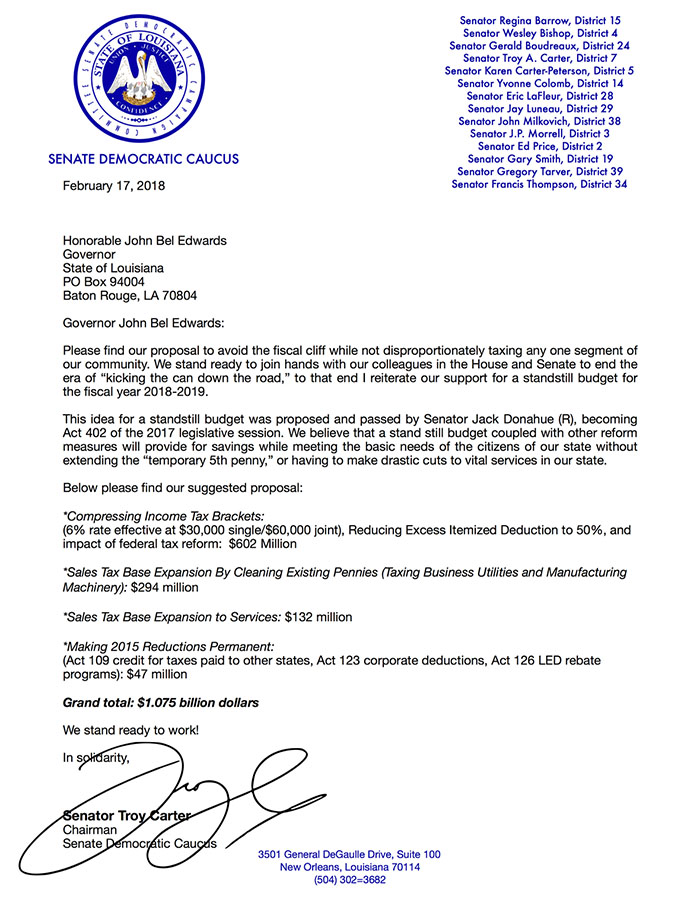 Got that? This is a “compromise” proposal which raises a billion dollars in taxes. Somehow if you don’t support it you’re on the political fringe.

We’ll call this a “dead letter,” because it has zero chance of getting a two-thirds majority.

Based on conversations we’ve had we think Seabaugh is likely correct when he says the only revenue-oriented idea which stands a chance of passage would be to bring back half a cent of the sales tax increase which is expiring, with a quarter cent of it remaining permanent but being dedicated to TOPS so as to prevent Edwards or the next governor from using TOPS funding to threaten the public. Half a cent would make for $440 million in revenue, putting the “deficit” at about half its current size. Some of the rest of the solution would come from recognizing the positive effects of oil prices being higher than they’re projected in this budget and the increased revenue from the federal tax reform’s changes in deductions of federal income tax from state tax filings, and then the remainder would have to come from budget cuts.

And to get to that compromise, Edwards will have to agree to implement the Louisiana Checkbook, to accept co-pays and a work requirement for his Medicaid expansion which has grown the state’s overall budget by more than $3 billion and to accept changes in the state’s spending limits.

Add all of this up and what’s quite likely coming is a special session which goes badly awry for the governor. He wants tax increases to fund his grand spending plans and he isn’t getting them, which he’s already had fair warning would be the case, and when the predictable happens he’s going to demonize the opposition and demand they present him with budget cuts he can use to call them uncaring and irresponsible for.

At some point the public is going to get tired of this act. Even polls showing Edwards with a positive approval rating show that tax increases are poisonous with Louisiana’s voters, which is the truly fascinating thing about those positive approval ratings: what are they based on? If our theory is correct and Edwards’ numbers are above water largely because the public isn’t paying attention, stoking a high-profile budget fight based on demands for tax increases will eventually get him noticed and not in a good way.

Also, at some point there will be advocacy groups putting money on television and radio in an effort to raise awareness of Edwards’ tax-hiking demands, and that will drive his numbers down.

This is why we’ve never understood Edwards’ demands for a special session or what he expects to derive from calling one. All he’s doing is making Seabaugh look prescient in calling him a far-left politician with an aversion to the truth. This week will likely go very badly for him.

UPDATE: We forgot to include this, which is an indication of just how delusional this governor is…

We’ve got a surge of momentum in LA, the likes of which we haven’t seen in a long time. Tomorrow begins a great opportunity for us to end the problems that have plagued our state for years. I’m ready to work with #lalege to get the job done right for everyone in LA. #lagov pic.twitter.com/fg2lKaltNI

A surge of momentum? Louisiana is the only Southern state to lose population in the last year.

Interested in more news from Louisiana? We've got you covered! See More Louisiana News
Previous Article JBE, Your Taxes And A Series Of Unfortunate Events
Next Article WAGUESPACK: Forget Politics, Let’s Use The Checkbook To Smoke ‘Em All Out