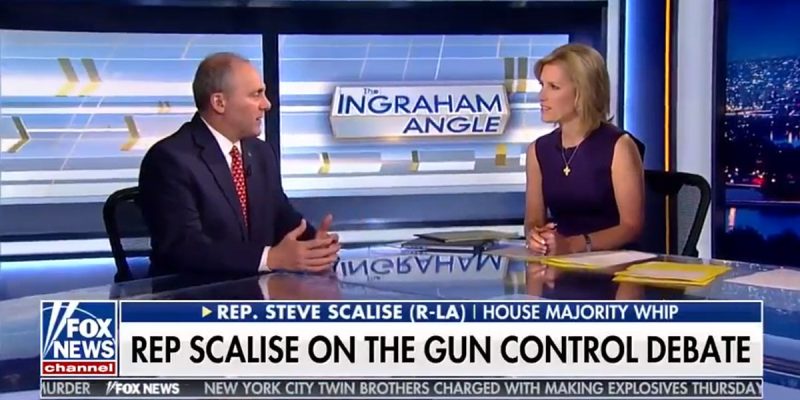 If anybody in Washington is qualified to talk about the aftermath of a run-in with a prospective mass killer it would be Louisiana’s own Rep. Steve Scalise (R-Jefferson), the House Majority Whip who continues to recover from injuries suffered when an unhinged lunatic tried to assassinate him and several of his colleagues last June – so it was only natural that Scalise would be asked about the subject of the Parkland, Florida shooting which killed 17 people Wednesday when he appeared on Laura Ingraham’s show last night.

During the appearance Scalise related his experiences to those of the victims and families in Parkland, and one item which was of particular import to him is how wrong and inappropriate it is for people to disparage the thoughts and prayers of regular people for those affected by incidents like this rather than to rush into public policy as a solution for all that ails us. Scalise said that in his experience those thoughts and prayers were meaningful, that he and his family felt them and that they made a difference in getting him through his ordeal after being shot by that lunatic.

He’s right, of course – one of the things we find so irritating about the ghoulish demands by gun-grabbing political entrepreneurs that we immediately pivot toward denying law-abiding people their 2nd Amendment rights when a criminal uses a gun to do something atrocious that could also be done by a car, a bomb or even a knife is the lack of interest in providing aid and comfort to those affected by acts like the one Nikolas Cruz committed Wednesday. Your political rantings do nothing for those people, and by now it should be obvious to you that you’re not effective at changing anyone’s mind. If you want to make a difference, try to help those who’ve been directly affected by doing something which isn’t political.

And here is Scalise saying that the love and support he received from strangers following his being shot has made that difference for him.

Wonder if anyone will listen.

There is also an interesting discussion of the Goodlatte-McCaul immigration bill which went down to defeat yesterday, and how Congress might go forward on immigration.