In a result our legal expert friends said was very likely to come this week, the legal attack on the Bayou Bridge pipeline project sanctioned by federal judge Shelley Dick in Baton Rouge earlier this month was blown up by the Fifth Circuit Court of Appeals Thursday. The pipeline is now clear for construction again, at least for now.

A federal appeals court has lifted a judge’s order that temporarily halts construction of a crude oil pipeline in a Louisiana swamp.

A divided three-judge panel from the 5th U.S. Circuit Court of Appeals on Thursday granted Bayou Bridge Pipeline LLC’s request for an emergency stay that suspends the judge’s ruling while it appeals.

On Feb. 23, U.S. District Judge Shelly Dick sided with environmental groups and issued a preliminary injunction stopping all Bayou Bridge pipeline construction work in the Atchafalaya Basin until the groups’ lawsuit is resolved.

Dick was an appointment of President Barack Obama’s. Her nomination was held up for most of a year by Sen. David Vitter during the 2012 election cycle; Vitter dropped his hold on Dick’s appointment after Obama won re-election. Environmentalist groups willing to stop at nothing – including falsely claiming animal cruelty involving the pipeline’s construction and attempting a boycott of banks providing financing to the pipeline – filed suit against Energy Transfer Partners, the company building it, in Dick’s court earlier this year. She was receptive to their arguments; the higher court was not. 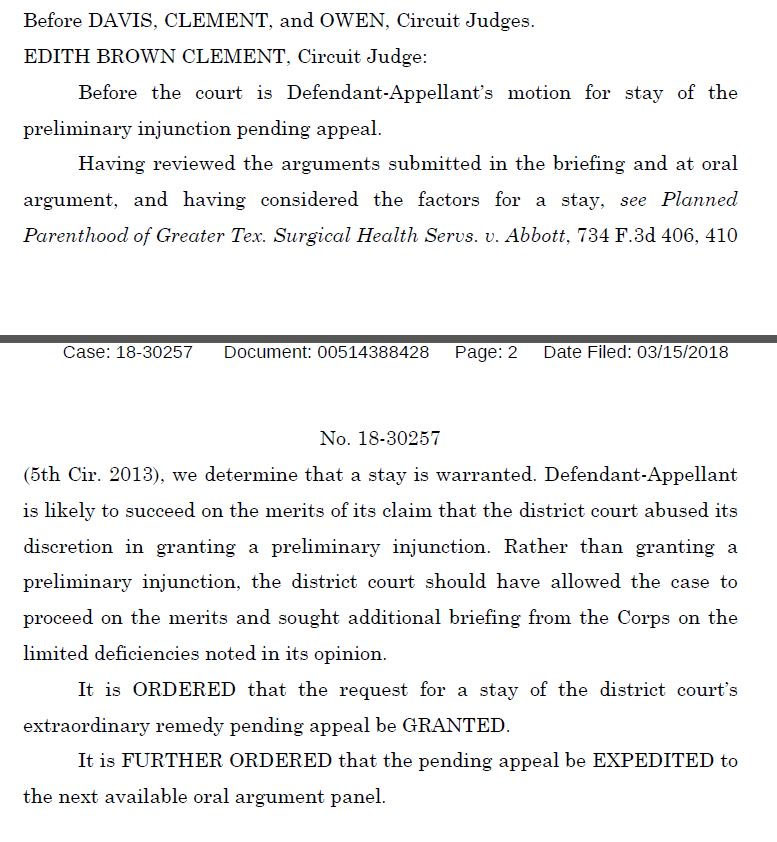 Something interesting about the author of that opinion – Edith Brown Clement, our readers may remember, was a rumored choice of president George W. Bush for the U.S. Supreme Court back in 2005, a position which ultimately went to John Roberts. She’s known as a star conservative jurist.

And Louisiana’s oil and gas and construction industries owe her a debt of gratitude for standing against frivolous lawsuits and for economic development. The Bayou Bridge pipeline is back on again.