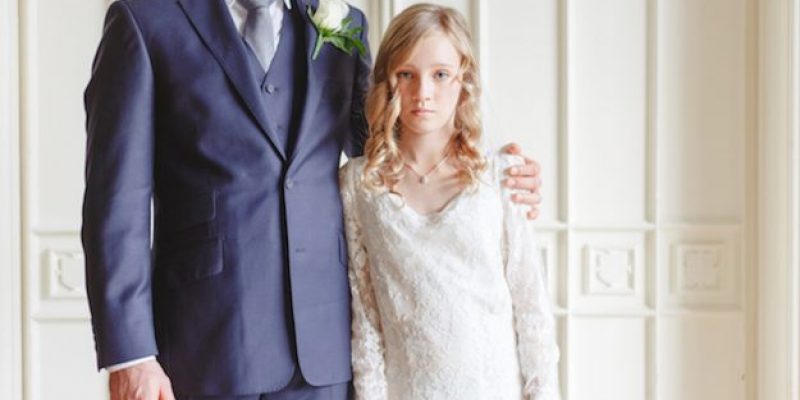 Child marriage – when a minor under age 18 is married – is legal in 49 U.S. states, accounting for judicial exceptions. In 25 states, no statutory absolute minimum age for marriage exists. To clarify, this means that minors can legally marry another minor or an adult in at least 25 states.

As of May 2018, Delaware is the only state that prohibits child marriage with no exceptions.

The vast majority of minors being married are girls and, human rights activists argue, many against their will.

Based on state marriage license data, U.S. Census data and other sources, advocacy groups and experts estimate that nine percent of living American women were married before turning age 18. Human rights activists and legislatures in at least 10 states are attempting to change marriage laws.

In the past 15 years, more than 207,000 minors were legally married in the U.S., many below their state’s legal age of sexual consent, according to a 2017 PBS documentary. With judicial and/or parental consent, children as young as 10, 11 and 12, mostly girls, have been married in the U.S. in the last few decades. In most states, if a pregnancy is involved, marriage between minors or a minor and adult can occur with a judge’s approval; no minimum age requirement exists when pregnancy is involved.

Unchained, a nonprofit advocacy organization lobbying to end child marriage in America, states that, “nearly a quarter-million children as young as 12 were married in the U.S. between 2000 and 2010 – mostly girls wed to adult men.”

According to the U.S. Census, the states with the highest number of child marriages are Alabama, Kentucky and West Virginia, followed by Idaho and some western rural states.

Human rights activists, including Human Rights Watch, Unchained, and many others, point to a nationwide epidemic of marriages legally being approved by courts between a rapist and his victim. In many cases, district attorneys have waived prosecution if the girl’s statutory rapist agrees to marry her and her parents give consent, as evidenced by the case brought to light in Florida, which prompted the Legislature to act this year.

The most recent example drawing national attention resulted from new legislation signed into law this March by Florida Gov. Rick Scott. After six years of advocating for protection of minors by one woman who was forced to marry her rapist when she was 11 years old, the Florida State Legislature passed a bill prohibiting marriage for anyone under age 17.

The Kentucky Legislature and governor also enacted a law this March that prohibits marriage below age 16 and requires parental consent and judicial approval for 17 year olds. In 2017, New York prohibited marriages under age 17, and allows 17 year olds to marry only if they received judicial approval.

All 50 states legislate that age 18 marks adulthood; individuals younger than 18 are legally minors. Some exceptions include states where minors ages 16 or 17 can apply for emancipation from their parents/guardians depending on judicial approval. At age 18, individuals can vote, enter the U.S. military or get married without the legal requirement of parental/guardian consent.

In order to be legally married in all 50 U.S. states, applicants must apply and receive approval for a marriage license through a county or city clerk’s office. Marriage licensing falls under county and state judicial system oversight, which is funded by taxpayer dollars. In all 50 states, paying a fee for a marriage license and receiving the local government’s approval to marry is required. The application process and fee amount varies by state. Once married, the marriage must be recognized by every other state under the Full Faith and Credit Clause of the U.S. Constitution.

In Hawaii, Pennsylvania, and Utah, 15-year-olds can by statute legally marry.

“Child marriage has a long and vibrant history in the United States. While activists have long urged legislators to raise the age of consent to marriage – and continue to do so – with parental consent, it remains possible for minors to marry in every single state,” says Nicholas Syrett, author of “American Child Bride: A History of Minors and Marriage in the United States,” published by the University of North Carolina Press.

A bill that was expected to pass and be signed into law in New Jersey prohibiting marriage to anyone under age 18 was pulled from the voting agenda at the last minute by State Assembly Speaker Craig Coughlin, D-Middlesex.