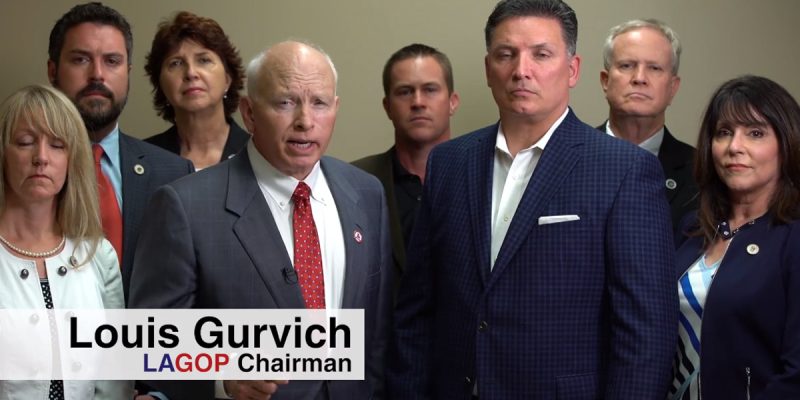 …and we would surmise would strike a more pleasant chord with the majority of Louisiana’s people than the long-winded and often bizarre message Edwards gave in Lafayette yesterday.

We have video of two of them, each significant in its own right. The first is from Louisiana GOP chairman Louis Gurvich, who had a number of conservative legislators and State Treasurer John Schroder in tow for his response, delivered from Schroder’s office in Baton Rouge yesterday afternoon…

And then interestingly enough, House Speaker Taylor Barras delivered his own message…

Gurvich’s speech, we thought, was significant in that it marks him as a communicator. He’s pretty smooth speaker, and he doesn’t mind offering passionate words about conservative principles. One of the things Louisiana has seemingly lacked over the past several years is someone not in elected public office who could be an all-weather spokesman for conservative causes, and the state GOP has for various reasons been unable to present itself as that bellweather. As a result, it has fallen to a number of lobby groups to pitch in, but often they’ve found themselves a bit outside their element – for example, LABI is an organization decidedly conservative in orientation, but its membership isn’t going to agree on every conservative issue and LABI’s purview isn’t going to comfortably extend into things like criminal justice or social policy. Ditto for Americans for Prosperity’s Louisiana chapter. Ditto also for the Louisiana Family Forum, which can answer for social issues but probably can’t be expected to take a lead in battles over the size and scope of government or economic policy.

The state GOP can do those things, though, and Gurvich’s speech yesterday makes him a pretty good candidate for Louisiana’s top conservative advocate. He’s concise, he’s clear and he’s credible – and when he gets the party in a position where it carries some financial heft and can back its messaging with the ability to make it rain on candidates for public office who adhere to its brand (not just by putting an “R” next to their names but by actually fighting for Republican causes), there is reason to believe Gurvich could become a major, if not a dominant, player on the state political scene.

And with Louisiana so desperately needing competent leadership of any kind in the political space, that’s a very hopeful development.

But of the two Barras’ response to Edwards might be the more interesting, at least with respect to what it signals for the short term. The thing to understand about the House Speaker is he’s not and has never been a very bombastic or confrontational figure. Barras’ background is as a banker, and his skill set is that of a dealmaker and a facilitator – he’s not a firebrand or a particular ideologue. But despite that nice-guy image among those who actually know him Barras has been savaged by Edwards, his Democrat allies (including those at the state’s newspapers) and even by some of the governor’s Republican pals with accusations that he’s unrealistic and obstructionist, that he’s bringing “Washington politics” to the state capitol (which is as absurd as it is meaningless) and that he lacks control of the body.

That acrimony has masked the fact Taylor Barras might be the most consequential figure in Louisiana politics of the 21st century to date, because Barras has brought legislative independence to a state which has never had it before. He’s forged the House of Representatives as a body not dependent on the governor for direction, and he’s done it with a relatively narrow margin of error, the constant threat of a coup and a governor and Senate bent on making him and his majority come to heel. And along the way Barras hasn’t publicly lashed out at anyone, he’s very rarely punished House members by stripping them of committee assignments for bad votes or other offenses and he’s generally refrained from making himself the center of attention. Barras could easily have cast himself as the leader of the state’s opposition to Edwards, but he’s refused to do that.

But his response to Edwards is a bit of a departure from his usual low profile. That indicates he may have had enough of the governor’s casting of blame, something we’ve noticed of late particularly since the House passed its version of the budget three weeks ago. Edwards is demanding $650 million in tax increases and nothing less, while threatening to veto any state budget which doesn’t have that revenue in it. Barras knows that’s an impossible and unrealistic request, and that under no circumstances could he find a supermajority for that within the House membership. He also knows that by vetoing the budget passed in the regular session Edwards created something new a logistical impossibility for the legislature to complete a whole new budget process by the end date of June 4 set in the call for the current special session, meaning there will likely be a third special session called to finish the budget. And Barras knows that his members didn’t sign up to spend half the year in the state capitol; they’re part-time legislators with jobs, businesses and families, after all, and at some point they simply cannot continue like this.

So when Edwards piled on to his budget veto and special session call and tax demands with the additional slap in the face of refusing to address the legislature at the Capitol on Tuesday, that was apparently it for Barras – and now he’s giving his own speeches. And in the process he’s throwing barbs the governor’s way, as with the crack about how Edwards heard “taxes” when everybody else was arguing over the voice on that video saying “laurel” or “yanny.” That’s a fairly gentle bit of ridicule, but from his speech it’s obvious Barras has had enough of Edwards and the counterproductive role he’s played in the legislative process.

What’s clear is that while Edwards might be insistent on a full court press for tax increases, his opponents are busily finding their voices as well. The next two weeks will be quite a political spectacle in the Capitol.