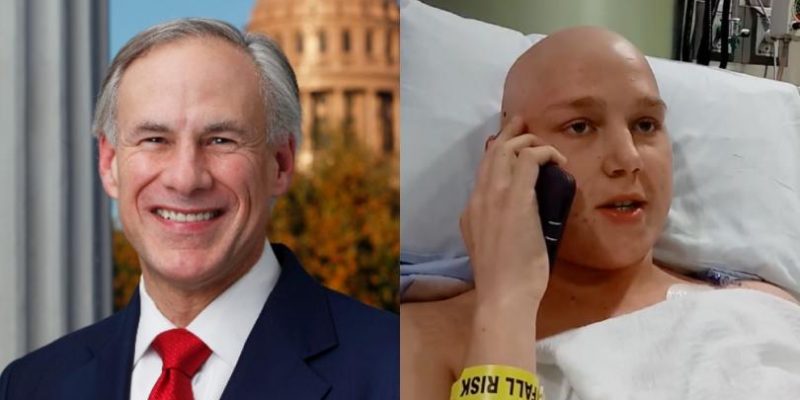 Governor Greg Abbott granted the wish of dying 16-year-old Jeremiah Thomas of Waco, Texas. Thomas’ wish through the Make a Wish Foundation was for the governor to “outlaw abortion altogether in the state of Texas.”

The Make a Wish program gives young people who are terminally ill a way to make a wish or achieve a dream; many choose to meet a famous athlete or actor. Thomas asked to contact the governor to ask him to end abortion in Texas, which the governor pledged to do.

He said, “For my wish, I wanted to talk to you and discuss a bill of abolition [to end abortion].” Citing a poll that 68 percent [Republican] Texans want abortion abolished, he said, “Sir, you would be representing the demands of Texans if you would pass this bill. We could end abortion here and now.”

The governor responded, which was recorded on video, and uploaded to Facebook. Governor Abbott told him:

“Your wish is on the Republican party platform position, and we’re going to be pursuing this… that is to outlaw abortion altogether in the state of Texas.

“So, your wish is granted.”

Gov. Abbott granted Jeremiah Thomas (16) his dying wish. He called Jeremiah yesterday and promised to help abolish abortion in Texas.The Governor was gracious with his time. He listened to Jeremiah's testimony and encouraged him in his faith. Jeremiah said that the Governor was "compassionate and receptive."Jeremiah shared his heart regarding abortion. He appealed to the Governor to protect preborn babies by completely abolishing abortion by treating it as murder and penalizing it by law in the great state of Texas. Prior to the call, the Governors wife, Cecilia, reached out to Jeremiah through Facebook. She sent prayers and hugs. They both demonstrated genuine Christian love and concern for the plight of our son.#Godsgotthis#AbolishAbortionTX#GovernorAbbott#MakeAWishwww.operationsaveamerica.org

Thomas was an all-star state champion athlete when he was diagnosed with bone cancer in March 2018. His father Rusty is the director the pro-life Operation Save America organization (formerly known as Operation Rescue).

Thomas was diagnosed with osteoblastic osteosarcoma, and has two tumors on his spine and one on his chest. His cancer is resistant to radiation, which means it is not treatable. He is paralyzed from the waist down and is in constant pain. Thomas’s health continues to deteriorate. His family is preparing for his death and “homecoming service.”

“I don’t deserve Your healing but Lord You will always deserve my praise. Through death or life, may Your great name be lifted up and everything that is of me fall to the waste side. Oh Lord, strengthen me that I may fight the battle with a courage Satan cannot tamper with. If You take me home or leave me here to fight a little longer, may it be Your breath in my lungs and Your song on my tongue. Lord I consecrate myself to the full advancement of the Kingdom of God! Lord, I love You and I can’t wait to see You face to face. Amen. Christ is not for sale and non-negotiable. To God be the glory, no matter what the future holds.”

Jeremiah encouraged viewers to attend an Operation Save America “From Justice to Victory” event taking place in Indianapolis, Indiana from July 14 to 21st. He said of the event:

“We’ll have an awesome group of youth there. If you’re truly looking for change, you’re sick of what you see of your generation and culture, and you want to see God move in mighty ways, come join us.

“Let’s end this holocaust in the mighty Name of Jesus.”

Interested in more news from Texas? We've got you covered! See More Texas News
Previous Article Finally, The Louisiana Legislature Is Gone From The Capitol…
Next Article SICK Peter Fonda says ‘Barron Trump should be ‘ripped’ from Melania & placed in ‘cage with pedophiles’