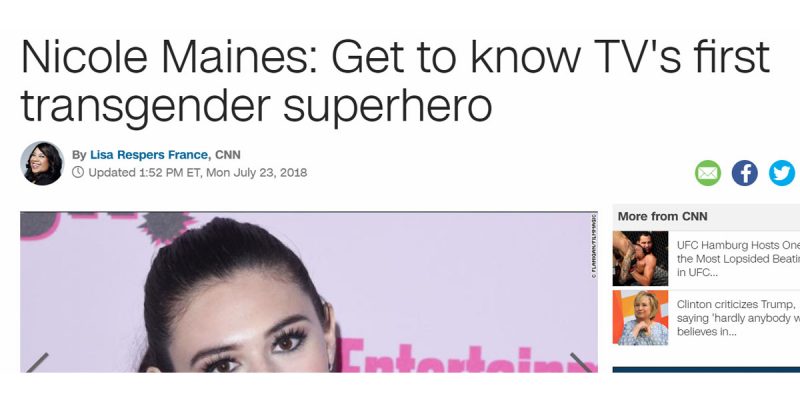 Transgender Nicole Maines is set to play Nia Nal, also known as Dreamer, and become the first ever transgender superhero on TV. To represent a superhero on television is more than just playing a role. This is both a great honor and a responsibility.

Superheroes first rose to prominence in comic books during the Great Depression and World War II Era. Naturally without question that was one of the most trying periods of the nation’s history.  There was a great call for leadership, might, determination, and an extraordinary display of the best of human qualities. Thus emerged the superhero, an iconic symbol for what individuals should and do aspire towards.

Little boys and girls have since grown up imitating their favorite comic book idol, harboring such thoughts as, “I want to be like Captain America.” Such an unreachable standard has acted as perpetual inspiration. Our qualities can always be better perfected.

A dramatic shift in culture has since transformed the superhero, a beacon of human excellence, into a transgender. An investigation into transgender culture would well reflect which qualities are being promoted as the pinnacle of human expression today.

In 2010, The National Center for Transgender Equality and the National Gay and Lesbian Task Force conducted the National Transgender Discrimination Survey Report on Health and Health Care. Just by reading the association’s name, one can safely assume their progressive mindset and know these numbers do not come from a source that would want to negatively portray the transgender community.

Maybe one of the most worrisome findings is that a steep 41% of transgenders report attempting to commit suicide, compared to 1.6% of the general populace. This means that for every 2 transgenders you encounter, there is a pretty good chance that 1 of them as attempted to end their own life. This is just taking into account those who have attempted the act, as we know that those who succeeded would not show up in this report.

One might argue that this reflects the exceedingly difficult time these individuals have in a body they don’t believe they belong in. In truth, one is more likely to attempt suicide the more transformative steps they take. The report finds that, “those who have medically transitioned (45%) and surgically transitioned (43%) have higher rates of attempted suicide than those who have not (34% and 39% respectively).”

It is not as if those transgenders who escape the suicide trend are otherwise without health issues. The Task Force found, “respondents reported over four times the national average of HIV infection, 2.64% compared to .6% in the general population, with rates for transgender women at 3.76%, and with those who are unemployed (4.67%) or who have engaged in sex work (15.32%) even higher.”

Sexually transmitted diseases are a nightmare, and HIV in particular is more than 4 times as popular in the transgender community. Dealing with this constant health plight and suicidal thoughts, is it a surprise that drug use would be sought to numb the pain? A significant 26%, “of the respondents misused drugs or alcohol,” in the past or concurrently with the study.

This has pressed far beyond inclusion and acceptance. Transgenders are now being held as the peak of qualitative prominence. If any other lifestyle choice was correlated with a 41% suicide rate, a date with the psychiatrist would be in order. For this community, a date with Marvel or DC is the approved alternative.