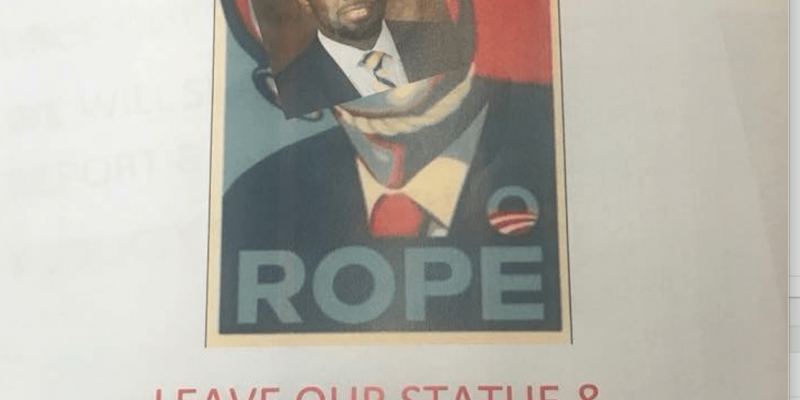 (Shreveport, Louisiana) – Caddo Commissioner and candidate for Mayor Steven Jackson held a press conference on Wednesday about a racist, threatening flyer that was left at a family member’s home.

The threat was in the form of a lynching illustration created from the popular poster of Barack Obama with the word “hope” below it replaced with “rope”. The commissioner’s face was transposed over that of the former President.

Below the image were the words, “LEAVE OUR STATUE & PROPERTY ALONE & GET OUT OF THE RACE N—–.”

The reference is assumed to be in reference to Mr. Jackson’s vote to remove the confederate monument at the Caddo courthouse. The vote was for removal by a vote of 7-5. The removal has been stalled by a lawsuit filed by the Shreveport Chapter of the United Daughters of the Confederacy. A judged since ruled to have it removed but an appeal is expected.

Jackson said he also received a threatening call from an unknown number, “I’ve also received harassing calls saying ‘Get out of the race, N word, or we will release these reports on you.”

He explained that he has reported the incident to the Louisiana State Police and may involve the FBI due to the matter being a federal hate crime.

When asked why he did not report the crime to the Shreveport Police Department Jackson replied that, “We feel comfortable putting this either at the state or federal level. I think they have the resources best to investigate it. SPD needs to be working on the crime issue.”

He continued, “To the persons who place these racist messages at our doorstep, we love you, we want to let you know we love you.”

The mayoral election is scheduled for November 6, there are 8 candidates in the race.