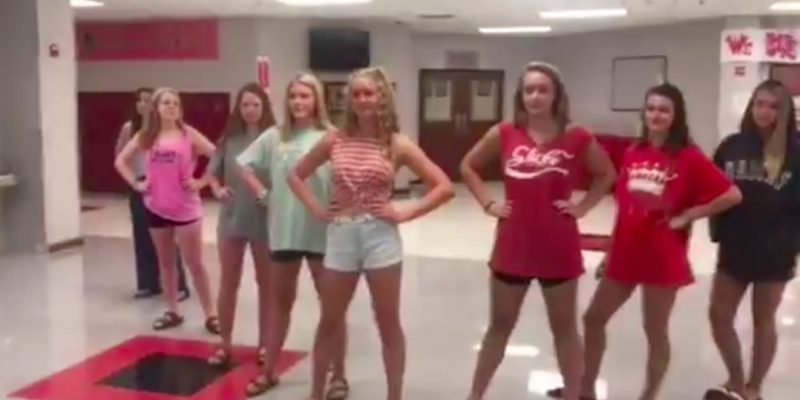 On August 16, the 3,000 students of Marcus High School in Flower Mound were shown a one minute tutorial about the school’s dress code on the second day of classes, WFAA and CBS DFW reported.

Acted to M.I.A’s song “Bad Girls,” it depicts a group of teenage girls walking through the school in oversized T-shirts and “barely-there” shorts. They are met by a school official who expresses disapproval over how they are dressed and sent them to a classroom called, “dress code violators.”

Seated in desks, with another female teacher at the front of the room, the students forced to repeat the phrase “I will not wear athletic shorts” over and over, as written on a white board.

Appalled, seniors Catherine Moring and Nicole Hollowell asked a teacher to send them the video, which Moring posted to Twitter, and the video then went viral.

Today my school was shown this video. So sad how ONLY girls are shown as the violators. I understand why my school has a dresscode, but what about the boys who wear shorts, or show their shoulders? It’s 2018…Why are we still over-sexualizing teen girls? pic.twitter.com/fCXymYAIEG

According to WFAA, school principal Will Skelton subsequently issued the following statement to students and parents:

“I apologized to our students regarding this issue today, but wanted to reach out and apologize to parents as well. I’m a firm believer that when you make a mistake, you own it, you apologize, and you make it right,” Skelton said.

“Yesterday we showed a dress code video that featured only female dress code violations, and was accompanied by a poor song choice. Construction in and around the campus prevented us from holding student orientation, which is typically accompanied by a fashion show that demonstrates what to wear, and what not to wear. We believed a video would be a good way to replace the fashion show, but this video absolutely missed the mark.”

“Please accept my sincere apology for not ensuring our video achieved its intended purpose – to remind ALL students of our dress code expectations.”

But come on. Is the video really sexist? Why are girls dressing like this? Where are their parents?