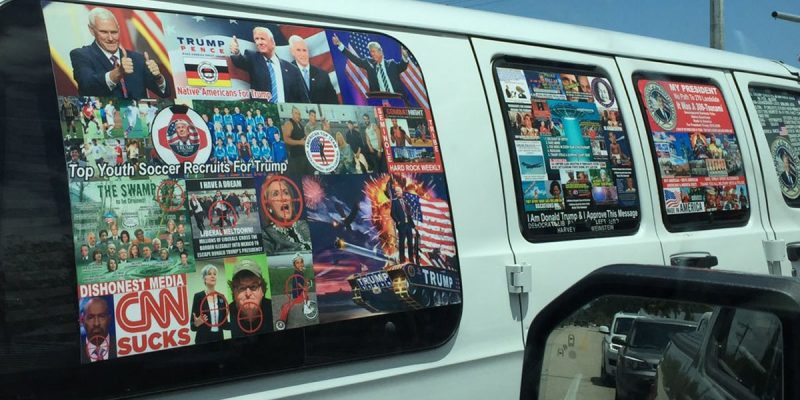 This guy managed to distribute a dozen “suspicious packages” to various Democrat political figures, not a single one which went off. It was such a spectacle that lots of people – and we certainly entertained the possibility as well – thought it was a false flag operation aimed at making the Democrats sympathetic.

But for the Republican cause, no such luck. Instead, it turns out the would-be bomber was caught today and he’s pretty much a political bonanza for the Democratic National Committee.

His name’s Cesar Altieri Sayoc, and he’s a native New Yorker of Filipino extraction living in Aventura, Florida. From his LinkedIn… 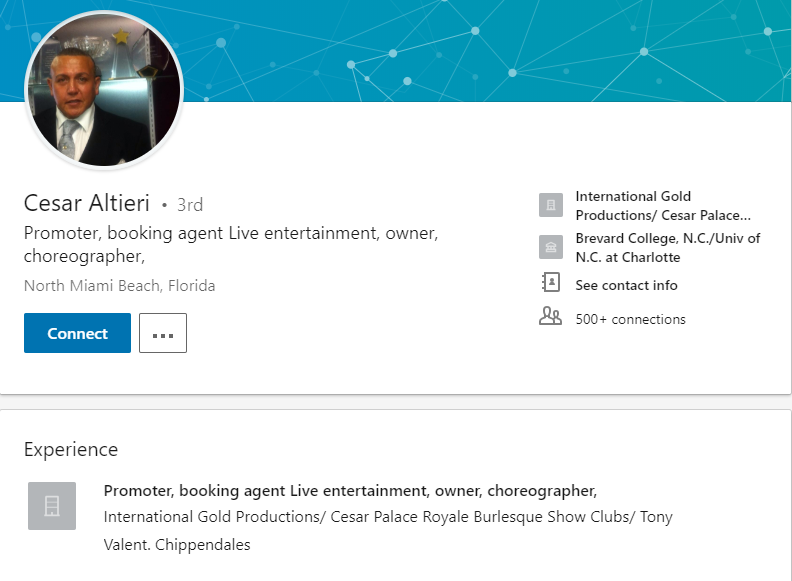 Yes, you saw that correctly. He books male strippers. Also from his LinkedIn, in the Education section, is a rather telling bit of biography…

Career decision of becoming a Horse Doctor was always a love for animals, which were here first and never do anything to anyone. And respect all living things. My family very sound Sayoc name in Medical field Grandfather Col. Baltazar Zook Sayoc that perfect the conversion oriental eye to Americanize. The first plastic surgeon to be observed by 8 million people in NY city Hospital. He over through Communist Philippines liberated island. He built all hospitals in Philippines islands and sets standards highest level. Most surgeon use his instruments which are patented. And a lot surgeon use today. Also Sayoc intl. schools marshals arts Kali that used to over throw communist party . Also one 5 Hero’s disciplinary my mother Madeline Sayoc Giardiello First president Pharmacy Cosmetic Association, Who Who Business Women of Year, Soul buyer consultant for Home Shopping Network, head number 1 marketing consul in World Aventura Marketing consul, up for city counsel women Aventura,

Sayoc’s van, pictured above, was a pretty dead giveaway that he’s insane. We got a kick out of the “Top Youth Soccer Recruits For Trump” sticker, and found the internet meme stickers covering all the windows a bit perplexing. Did the cops never give this guy a ticket for driving around with all the windows obscured?

Especially since the cops knew this guy VERY well.

Sayoc has been arrested several times in Broward County, Florida, dating back to 1991, court records show. His most recent arrest in Broward was in 2014. In 2002, he was charged with making a bomb threat in Dade County, Florida. He was sentenced to one year of probation. Prosecutors agreed to withhold adjudication of the felony charge, meaning it was dismissed after he completed the probation in 2003.

In 1991, Sayoc was charged with third-degree grand theft, a felony. He pleaded guilty that same year and was sentenced to two years of probation. In 1994, his mother sought a domestic violence injunction against Sayoc, court records show.

Sayoc was arrested on drug charges in 2004. He was accused of possession and sale of steroids, along with possession of a controlled substance without a prescription, tampering with evidence, filing fraudulent tax returns, criminal use of personal ID info and possession or unlawful issue of a driver’s license. He pleaded guilty that same year and was sentenced to 18 months of probation.

In 2013, Sayoc was charged with battery and third-degree grand theft, a felony. He pleaded guilty in 2014 and was sentenced to probation. In 2009, Sayoc was charged with operating without a valid license, not having insurance and not having a tag light and was fined after pleading guilty to the misdemeanor charges. In 2014, Sayoc was arrested on a petit theft charge and violation of probation. He was sentenced to 30 days in jail.

So that’s who we’re dealing with. This guy is more or less a career criminal, loser and a loon operating on the margins of society, and he decided to latch on to politics as a hobby – and his exploits produced a similar result in this field as they’ve produced in everything else he’s touched, which is he’s a disaster.

And somehow we want to get more people engaged in politics, because that’s a good thing.

Make bombs to take out Hillary, Maxine Waters, Corey Booker, Debbie Wasserman Schultz, Eric Holder and the rest? You just made all of them sympathetic figures without harming any hairs on their heads. Want to blow up CNN? You blew up their ratings. Good job, stupid.

This guy might be the biggest loser in American history. We need to make his name a verb – to “sayoc” needs to be to fail so spectacularly people don’t trust that you’re actually trying to do what you’re doing.