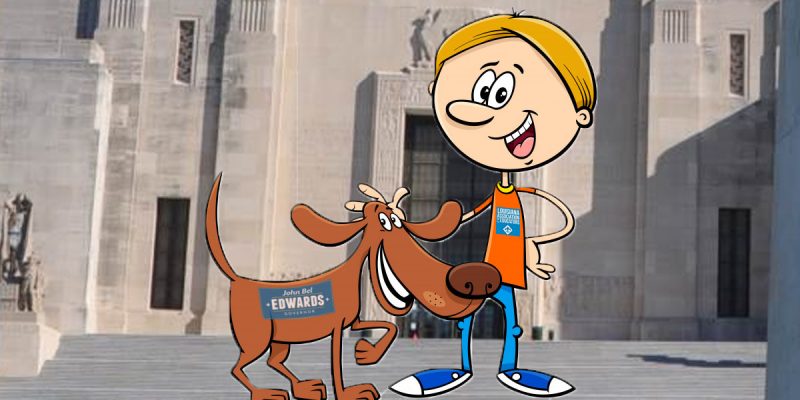 The moon will fall from the sky before you hear anyone in the legislature say anything against the governor’s proposed teacher pay raise. Teachers and their families vote and Louisiana, as it should, holds its teachers in high regard. The legislature will no doubt fall all over itself to vote to pass the BESE resolution when it comes to us.

But there are very important issues at play that should, though they probably won’t, be given level-headed thought. First and foremost: will a pay raise do anything to improve the abysmal education outcomes of our students?

Unless teachers are not trying and a raise will motivate them or unless our teachers are generally really bad and this would allow us to fire many and replace them with better quality teachers, then anyone who argues that it will improve outcomes is, frankly, phony. I am not one who believes the absolute validity of either of these statements and so I don’t believe that a pay raise will do anything to improve outcomes.

Next to consider is, “why is the state being asked to provide a pay raise and not the local districts?”

First we need to understand that teachers are employees of the local school districts and not the state. A recent Ed Week study revealed that Louisiana spends over $12,000 per student on public education. That is just $300 less than the national average and it is $2,000 to $3,000 more than all the other traditional southern states. The education folks claim that this is because of state mandates and because we have a huge UAL (unfunded accrued liability, for teacher pensions). Well, just as we do, every state has mandates (such as pension, health insurance, etc.) that are placed upon local school districts so that argument sinks. We do have a high UAL resulting from our pension system, but even that doesn’t explain why our cost per student is so high. And nothing can explain why for all that spending our results approach dead last.

To put it bluntly, the state is being looked to as the source of funds because local districts would have to call for a millage election and no local politician wants to ask for more taxes. Besides that, the people would probably not vote for a new tax anyway – as they have very little faith in their local public education system and they just don’t trust government. So the easy way for the locals and the unions to get more money is to come to the state; they know that state politicians just love to hand out pay raises, it’s great for re-election!

The governor wants to create an across-the-board pay raise for all teachers.

That’s because a pay raise is what the teachers’ unions are demanding from him as payback for their support. But such a process ignores a very real problem that we have. We, like most other states, are suffering a teacher shortfall especially in new teachers, special education teachers, and specialty teachers (math, science, and so on).  The governor’s plan is great to remunerate union support but absolutely ignores what is best for Louisiana.

Teachers no doubt should expect a pay raise but we should tailor that raise so that it is weighted most heavily toward the categories of teachers that we most desperately need. This is a clear case of the unions forcing the governor’s politics to override what’s best for our state.

The nature of the pay raise should be given careful consideration. There are many districts that have done the right thing; raised millage and given their teachers raises. The governor’s plan would just double down on those districts and shortchange them of control of the equivalent funds that wouldn’t be need for raises.

Also we must realize that the governor’s plan is to apply this pay raise through the Minimum Foundation Program structure, the constitutional program by which the state government supplements local school funding. That means that no matter the state’s fiscal position, the pay raise is permanent and recurring. It also means that the pay raise will increase the school districts’ exposure to higher pension obligations. They may not have the funds to pay those added pension costs so they may have to cut in other areas. But the unions don’t care – they get a double increase, so the governor will push an MFP increase anyway.

Perhaps the worst problem with this plan is that in his entire tenure as governor he has just ignored the failure of education and has made no effort to show leadership toward making things better. Perhaps he assumes that he can’t lead in this area because the unions are one of his few support groups and they are adamant against reform in any manner. Or perhaps he just doesn’t see any political advantage in trying to make our state better except by spending more on recurring expenses despite the fact that we spend more than any other southern state already. No matter why Edwards ignores education, we as legislators should not. The legislature can and should be for a pay raise, but one conditioned upon an agreement to pass and have signed some of the reforms, such as pension, accountability, and teacher improvement, that we have been trying to achieve for years.

Yes, it’s fine to propose a pay raise – but not just because it is politically astute for the governor. We should tailor a raise to impact where we needed it most. We should demand long overdue reforms. And finally, though I know that it is too much to ask, but somehow we should expect that the unions would join in the efforts to make education better instead of always being against everything except more money.

I believe that a pay raise is a good thing as long as it is part of an overall strategy to improve the lives of our young people. Anything else is just using children as cannon fodder to satisfy the needs of the governor and the unions.