We tend not to do too much on local political races here at The Hayride, on the theory that if you do one of them you’re going to have to do them all and we just don’t have the resources to pull that off at this point. That said, once in a while you run across a local contest which is too much fun not to mention – and we’ve encountered three of those in advance of Tuesday’s elections.

For example, there’s the juvenile court judge race in Jefferson Parish between a pair of Republicans, Amanda Calogero and Jennifer Womble. It’s something of a nondescript race, as juvenile court judge races tend to be. Calogero would in a normal case be thought of as the favorite – she comes from a prominent legal family in New Orleans, as her father-in-law Pascal Calogero, Jr., was once the Chief Justice of the Louisiana Supreme Court, and she’s the lead prosecutor for juvenile crimes for the Jefferson Parish District Attorney’s office.

But into each campaign a little rain must fall, to paraphrase the old saying, and in late September that absolutely happened to Calogero when her brother in law Pascal III got pinched by the feds for something more than a little bit inconvenient. From a press release out of the U.S. Attorney’s office in New Orleans…

U.S. Attorney Peter G. Strasser announced that PASCAL CALOGERO, III, age 59, a resident of Metairie, Louisiana, was charged today in a one-count bill of information with conspiracy to commit sex trafficking of a minor, in violation of 18 U.S.C. ‘ 1594(c).

If convicted, CALOGERO faces a maximum term of life imprisonment, a fine of up to $250,000.00, between 5 years and a lifetime of supervised release after imprisonment, and a mandatory $100 special assessment.

Makes you wonder who J.B. is, right?

Calogero isn’t a judge like his father or a lawyer like his brother Michael, whose wife is the one running for juvenile court judge. He worked for 25 years as an IT guy for the city of New Orleans, a job we assume was suitably manageable in its demands on his time and attention to allow him to engage in his recreational and entrepreneurial pursuits of choice. That gig working for the city, we understand came courtesy of his family’s longtime connections with the Landrieu family – Pascal, Jr. was a law partner of Moon Landrieu’s back in the old days.

We’re not going to do the guilt-by-association thing here. But two things are inescapable – first, that it’s impossible to understand the scandal involved in the son of the former Chief Justice of the Louisiana Supreme Court (interestingly enough, Pascal, Jr. won his initial Supreme Court race over former New Orleans District Attorney Jim Garrison, of JFK fame) getting busted for turning his house into a brothel for adolescent prostitutes. Seriously – that’s the kind of thing you simply can’t make up.

And second, you’ve got to feel for Amanda Calogero, who after all is an in-law. Of all the lousy luck – you run for juvenile court judge, of all things, and you get hit with this, which literally has to be the worst possible political development in such a race beyond your control. Little wonder that her campaign team did what they could to clear the field in that race and was nearly successful, except Womble managed to beat back a legal challenge to her name on the ballot by showing she’d filed an extension on her 2017 tax returns.

While the Calogero race might be the most eye-poppingly crazy local campaign going, there’s another judge race in suburban New Orleans which could be even more entertaining based on the doggedness of one of the candidates to do his homework on the other. The victim of that persistence is Darren Roy, an assistant district attorney in St. Bernard Parish running for judge there with the assistance of at least some of the local courthouse mob – but one key weakness.

Namely, that Roy doesn’t really live in St. Bernard. And his opponent Gregory Rome wants everybody to know it. 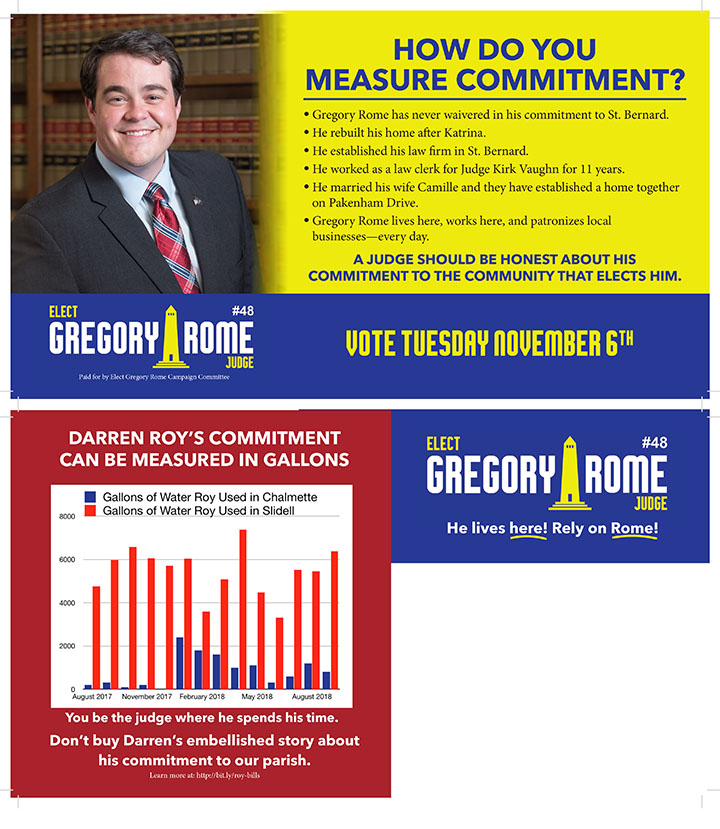 Pulling Roy’s water bill at the house in Slidell he’s actually living in is some pretty thorough opposition research. So is hiring a private detective to stop by and take pictures of Roy bringing trash cans to the curb in Slidell.

On the campaign trail Rome learned that Roy was living in Slidell and verified the assertion when his campaign hired a licensed private investigator, Keith Lobrano. Investigators followed Roy for two weeks and observed him spending the night at his Chalmette house only once in that time. These water records and the results of the investigation uphold the campaign’s conclusion that Roy is ineligible to hold the office of district judge.

The Louisiana Constitution requires candidates for district judge to be domiciled in the judicial district for an entire year before the election. Under Louisiana law, a person is domiciled in the place of his “habitual residence.” Courts often use evidence like utility bills and eyewitness testimony to determine where a person is domiciled. Under state election law, a challenge to a person’s candidacy must be brought within a week of the close of qualifying. If Mr. Roy were elected without being legally qualified, he would be subject to removal from office.

Which of course led to this, which is one of the most entertaining campaign ads we’ve ever seen…

Roy’s story is that the house in Slidell is his new wife’s house and that she’s currently pregnant, and he’s not going to make her move before the baby comes. Which would be a more effective answer if those water bills didn’t show he’s been “sleeping in Slidell” since before they were married.

Whether this works or not we can’t predict. It’s a local race – who knows who’ll win? What we can say is we are amused.

And then there’s the school board race in Shreveport, in which a Democrat named Sumer Cooner – not Boomer Sooner, mind you, but Sumer Cooner – is running for office on the usual Together Louisiana narrative about how the state’s Industrial Tax Exemption Program is stealing money from school kids in Caddo Parish.

It isn’t, of course. Caddo’s per-student spending, according to the Louisiana Department of Education website, goes about $9,700 per student – which is right around the state average. Shreveport’s job market is a bit less satisfactory, which would tell you that without ITEP it’s conceivable the place could be positively hellish from an economic standpoint.

But that’s neither here nor there, because nobody in Shreveport seems to be talking about Cooner’s views on tax exemptions. Instead it’s something else.

And we’ll just let pictures tell that story, and allow the reader to deduce what’s driving the water-cooler conversations.

First, here’s the bus bench ad Cooner bought all around her district… 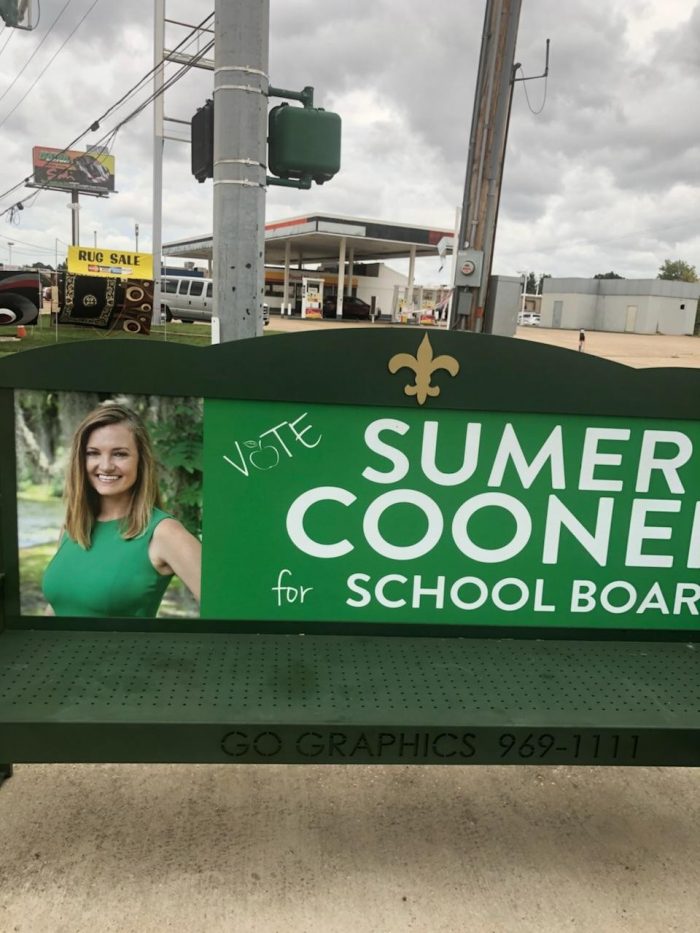 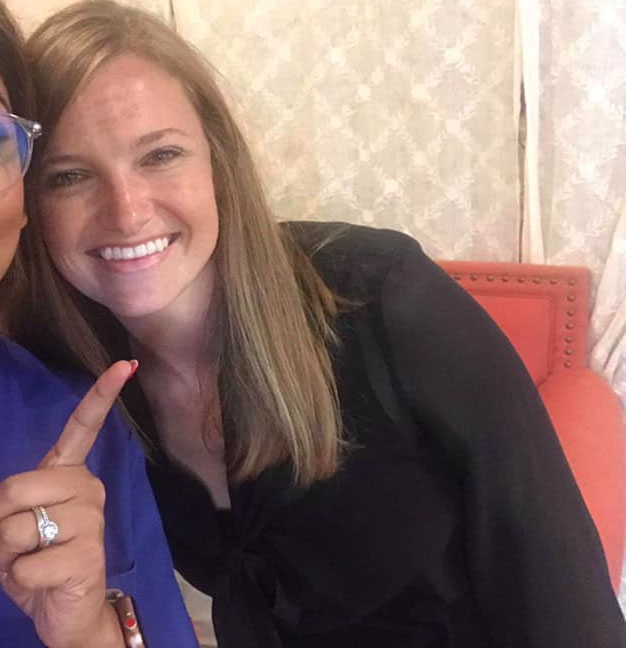 Some of our readers will immediately see what the folks in Shreveport are talking about. Others might not. For our part, we’ll just say that Shreveporters can get worked up about things that folks in New Orleans will gloss right over while they’re waiting on the FBI and the U.S. Attorney to cart the pols and their families off to federal prison.