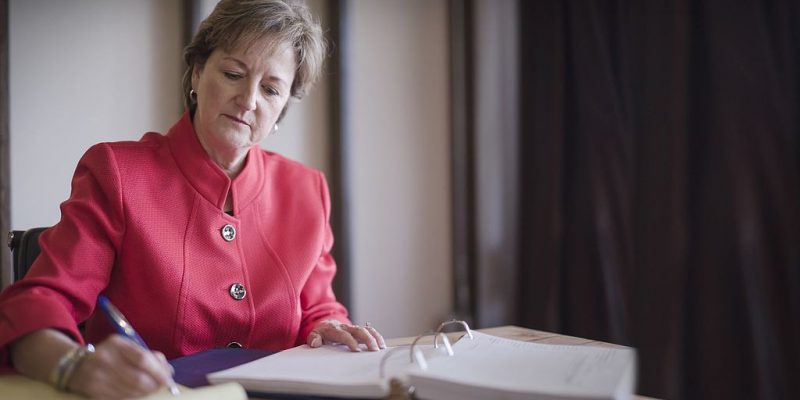 First elected in 2015, Sen. Hewitt emphasized the need for fiscal reform and shrinking the size of state government. She committed to limiting spending, and funding programs with measurable results, including streamlining higher education and healthcare.

Sen. Hewitt accomplished creating the LaSTEM Advisory Council to help facilitate the availability of and training for high paying jobs in the areas of science, technology, engineering, and math (STEM) fields.

A former oil and gas industry executive, Sen. Hewitt now serves as vice-chair of the Senate Transportation Committee, and is a member of the Joint Budget and Senate Finance committees.

ALEC is America’s largest nonpartisan, voluntary membership organization of state legislators dedicated to the principles of limited government, free markets and federalism. ALEC seeks to educate and inform legislators about the benefits of free market and fiscally responsible policies. Every year it recognizes members who exemplify these principles in their efforts.

“I’m very humbled and honored to be selected as Legislator of the Year by ALEC,” said Sen. Hewitt. “ALEC has been a tremendous resource for me as a Louisiana legislator. Their nationally-recognized experts have provided me with data and best practices that have been useful in formulating policies to truly make a positive impact on our state.”

ALEC Chief Executive Officer Lisa B. Nelson applauded Sen. Hewitt’s problem-solving approach to legislating, as well as her embrace of free market principles and the strong leadership she has demonstrated in ALEC’s Louisiana chapter, in a press release put out by ALEC.

“Senator Sharon Hewitt is an example for legislators across the states,” said Nelson. “Hewitt’s focus on solutions, not politics, as well as her commitment to the people of Louisiana show through in all her work. The ALEC Board of Directors is proud to recognize Senator Hewitt as Legislator of the Year for her leadership of the Louisiana ALEC delegation and her commitment to limited government, free markets and federalism.”