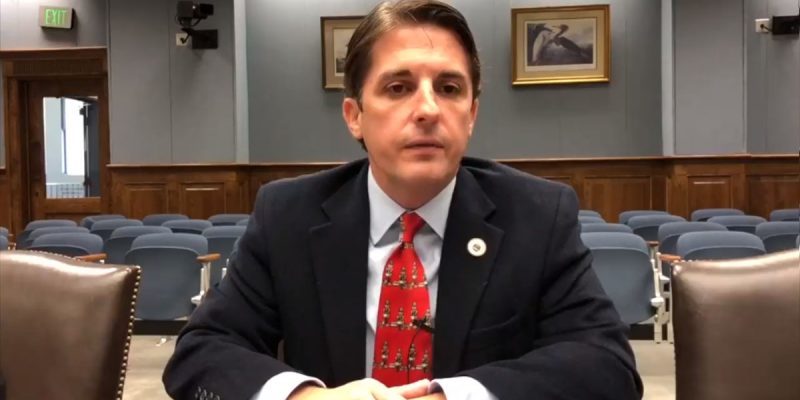 There’s a letter to the editor at The Advocate’s website today from someone named Sandra Adams, who styles herself as a “retired lobbyist,” which might be the dumbest thing we’ve seen in a while – and which illustrates the absurd mentality possessed by too many people who hang around Louisiana’s state capitol.

Adams, who was a registered lobbyist for something called the Louisiana Coalition for Maternal and Infant Health, which as best we can tell hasn’t existed for several years, from 1990-2009, and has done the usual lefty do-gooder bit – volunteering at the East Baton Rouge Council on Aging, presumably before that was turned into a publicly-funded get-out-the-vote operation for the Democrat political machine, serving as president of WRKF, the public radio station in Baton Rouge, and was chair of the LSU School of Social Work Board of Advisors, among other things.

And according to Adams, Louisiana House Speaker Taylor Barras is Ebenezer Scrooge and Cameron Henry, the chair of the House Appropriations Committee, is the Grinch.

And ohhh, are the Democrats hot about it.

Jim Beam, the aged capitol reporter for the Lake Charles American Press who used to attempt to pass himself off as a center-right pundit but has regurgitated the Edwards line with astonishing regularity since 2015 if not before, had a conniption about the veto. In his Sunday column, Beam came off an awful lot like Kevin Bacon in Animal House screaming “All is well!” at a rioting crowd touting the newfound solvency of Louisiana’s state government.

The Associated Press said $43 million in current budget needs couldn’t be funded at the regular session. Included in that $43 million is $16.3 million for the state Department of Corrections, $10.8 million for the Office of Juvenile Justice, and $10.5 million for Louisiana sheriffs who house state prisoners in their local jails. Funding for seven other agencies or departments would also be possible.

The Corrections money would fund a pay increase already given to prison workers in order to improve safety and curb the high employee turnover rate. The Juvenile funds would open a new juvenile prison in Bunkie to get youngsters out of adult prisons.

The $190 million in the next fiscal year would go a long way towards funding a $1,000 annual pay raise for teachers and $500 for support personnel. However, none of the extra money can be spent because Henry refused to approve the revenue forecasts.

Henry said there isn’t a pressing need to spend the money today, but there is. The additional income projections have to be increased by Dec. 31. After the deadline, agencies would have to wait until the 2019 legislative session to see if they get the cash.

“If that’s the game that you all want to do,” Alario said, “then you ought to just say that.”

Edwards accused Speaker of the House Taylor Barras, R-New Iberia, and Henry of hijacking a nonpartisan process for political gain. Barras couldn’t make the revenue-forecasting meeting and sent Henry in his place.

“Once again, the speaker is bending to the will of a small band of obstructionists in the House who are determined to keep the status quo in place,” Edwards said.

None of this is anything new. It is just another example of how a handful of Republicans in the House have thrown up roadblocks for three years. Now that the 2019 gubernatorial race has become top news, we can expect accelerated efforts in the coming months.

This state isn’t anywhere close to the trouble that Kennedy, Henry or others in the GOP would like us to believe. The economy is recovering because the state’s gross domestic product (GDP) in the second quarter of 2018 grew by 4.3 percent, outpacing the national average of 4.2 percent.

The state budget has been stabilized. Over 450,000 low-income citizens have health care for the first time. Criminal justice reform has become a reality. Foster children are able to remain in the care system until they can take care of themselves. Edwards has maintained close ties to President Donald Trump.

Throwing up roadblocks? Those Republicans have allowed Edwards to inflict SEVEN BILLION DOLLARS in tax hikes over the past three years on Louisiana’s taxpayers. And touting a one-tenth-of-a-percent edging of the national GDP figure for one quarter of a year, after the state’s economy SHRANK for two years running, is hardly a convincing argument for Louisiana’s boom economy.

Beam’s diatribe was moronic, but it didn’t quite hit Adams’ absurd screechings – which, being a letter to the editor rather than a newspaper column, at least had the benefit of brevity…

It is a crying shame to distort a process that has served Louisiana well for many years — the Revenue Estimating Conference. The Conference is legally required to make estimates of the revenue that will be available for the Legislature to use to invest in the critical needs of our state. It is not designed to address budget issues as that is the purview of the Legislature. In the recent meeting, Chairman Henry was the lone no vote against recognizing additional revenue that not one, not two, but three economists agreed would be available.

During the 2018 Legislative session, the Legislature voted to place certain items in the budget bill subject to recognition of additional revenue and approval of the Joint Committee on the Budget. The law that created the Revenue Estimating process requires it to review and revise, as necessary, the revenue estimate for the state by the end of December each year. Chairman Henry’s no vote on the new estimate means that critical needs of the state for which revenue is actually available cannot be met. The list is too long for me to detail in this letter. If Chairman Henry opposes one or more of the items, he could legally discuss them and ask the Joint Budget Committee to defer action on them. Surely he does not oppose everything on the list.

The Conference is to meet again on Dec. 10. Louisiana would be well served if Scrooge Barras attends and votes on the revenue matter. There will be opportunities later for Grinch Henry to address items that members of Joint Budget may choose not to fund.

In other words it’s Henry’s – and Barras’ – duty to vote to recognize that revenue, regardless of what they think of the state’s economic performance. And if they don’t, they hate Christmas, because the state government is, after all, Santa Claus.

Thanks to Ms. Adams for admitting what we all know is the Democrat Party’s idea of civics.

So why would Cameron Henry, subbing for Taylor Barras, be reticent to recognize that $150 million?

Well, here’s why. When Henry or Barras accedes to recognizing that surplus, it isn’t going to go toward road construction. It certainly isn’t going to go toward tax relief for the productive classes in Louisiana who at this point count themselves suckers not to have already left for Texas (think that 4.3 percent number was something? Texas’ economy grew at SIX PERCENT in the second quarter of 2018). Instead, it’s going to be spent giving pay raises to teachers or state employees, or it’ll be dumped into the budgets of the state agencies.

In other words, it’s going to be spent growing government. It’ll be spent increasing Louisiana’s baseline expenditures, when the state’s budget is $32 billion already. And any attempt to back that lucre out of the state’s budget, whether to reprioritize for infrastructure, to offer tax relief for the citizenry or to balance the state’s budget – which contrary to Beam’s “All is well!” howlings is still an ongoing problem, because the bill for Edwards’ Medicaid expansion is surely coming due, and sooner rather than later, and that bill will be a lot more than $150 million – will then result in screaming about a “fiscal cliff” and massive deficits, and state agencies which can’t support their missions with one dollar less than they’re getting.

We’ve heard it all before.

Henry has heard it all before. If you haven’t seen today’s Hayride Quote Of The Day, it’s Henry’s – talking about this very issue…

“I’m trying to avoid a session where the governor comes out with more ‘Chicken Little’ scenarios claiming we spent too much money so now we have to raise taxes again. He’s a big proponent of raising taxes.”

At least our buddy Dan Fagan, writing in his Advocate column, understands this stuff. Fagan delivered a convincing rebuke to this absurd narrative by noting that Edwards, for whom the Beams and Adamses of the world are shilling, is the biggest budget liar Louisiana’s ever had…

Edwards called Henry’s veto vote an “unprecedented political ploy,” which is rich coming from him. Edwards pulled off the mother of all “political ploys” when he sent eviction notices to seniors living in nursing homes this year, using it as leverage to force House Republicans to raise taxes.

Unless the governor honestly planned on cutting the budget by evicting nursing home seniors, it’s an obvious stunt. And if that was his plan, he would have had to consider nursing home seniors less important than subsidizing Hollywood with film credits, paying the college tuition of kids whose parents make more than six figures, or the hundreds of millions in subsidies through the years the state has given Louisiana’s richest family, the Bensons. But Edwards never intended to evict nursing home patients, proving he’s a master of “political ploys.” He was willing to allow seniors to fear they’d be out on the streets just to get his tax increase. It wasn’t just a political ploy; it was diabolical. What’s stunning is his arrogance and hypocrisy daring to accuse anyone else of using a political ploy.

The governor says he wants to use some of the projected increase to give teachers a raise, among other spending. Henry says he supports teacher pay raises but wants to wait to see if the state can afford them.

Edwards should have lost credibility long ago when it comes to budget projections. His description of the size of the so-called fiscal cliff changed constantly from $1.6 billion to a little more than half a million dollars. Each time Republicans delayed his call for new taxes during his parade of special sessions, they saved taxpayers hundreds of millions. Edwards finally wore House Republicans down, and they agreed to extend close to half of the temporary sales tax that was supposed to expire, raising $466 million. But then we learned the state ended up with more than a $300 million surplus. That ominous fiscal cliff we heard about at nauseam? Yeah, not so much.

Henry is right to be skeptical about spending money before we know we have it. Especially with Edward’s well established track record of exaggerating the need for new taxes.

We’re thankful Louisiana has fiscal conservatives in positions powerful enough to stop the runaway theft of our tax dollars to pay off John Bel Edwards’ friends in the public sector. And it’s an absurd shame that attempting to protect taxpayers gets you called nasty names by the governor’s minions.

But that’s why next year’s election is so important.

Interested in more news from Louisiana? We've got you covered! See More Louisiana News
Previous Article The Legacy of G.H.W. Bush: “No New Taxes,” end of conservatism, modernization of New World Order [videos]
Next Article GATES: Could this be the end of the Louisiana State Bar Association?