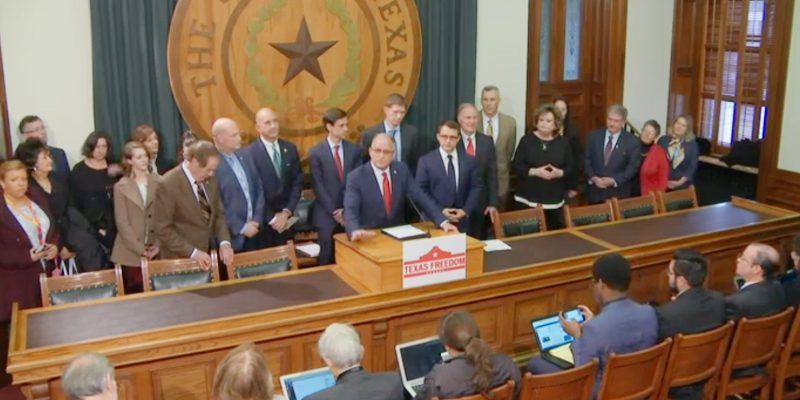 AUSTIN — With new caucus leadership and a friendlier House Speaker, the Texas Freedom Caucus laid out a list of eight conservative legislative goals on Tuesday that appear not much different than previous years but with priorities that closely match the Speaker’s preferences.

“Enamored” was the word used to describe their feelings for the ideas being supported by newly elected Texas House Speaker Dennis Bonnen. The caucus, known for being the primary avatar against previous Speaker Joe Straus last session, signaled a desire to cooperate with leadership rather than block bills and use parliamentary tactics to amend legislation. By contrast, last session, the caucus pulled off the “Mother’s Day Massacre,” which prevented around 100 bills from leaving the House floor in retribution for Straus’ blockade of certain conservative reforms. The caucus itself has its origins in members of the Texas House who opposed Straus’s re-election in 2015 and who later banded together.

With the deadline to file regular bills coming up in roughly two weeks (March 8), the Texas Freedom Caucus laid out their agenda with plenty of time to go. They are, according to a press release:

Rep. Matt Shaheen expounded on school finance, and that a key focus will be on reducing the state’s dependence on the “Robin Hood” finance system and starting a merit pay incentive structure for teachers.

Rep. Matt Schaefer, last session’s caucus chairman, laid out the case for border security and immigration policy reform as a federal responsibility, but also a problem that Texas must also address. Schaefer said the caucus supports the proposed $800 million set aside for border security and said they back President Donald Trump‘s border wall plan.

No specific bills were mentioned regarding religious freedom.

Members of the caucus include a small but vocal minority of Republican House members:

While the number of members is unchanged since last session, the Caucus lost Rep. Jeff Leach and gained Middleton.

“While it is a new day in the Texas House our principles have not changed,” said Rep. Cain, who added the list is far from exhaustive. “… Promises come cheap at the Texas Capitol. Results matter. Actions matter. That’s why we formed this caucus: to advocate for conservative reforms. And we will continue to do so regardless of who stands on the Speaker’s dais, regardless of who leads the Texas Senate, and regardless of who occupies the Governor’s Mansion.”

Interested in more news from Texas? We've got you covered! See More Texas News
Previous Article The Depressing Story Of Dr. Kevin Work, And What It Says About Our “Pro-Life” Governor
Next Article U.S. Supreme Court Limits “Policing For Profit”