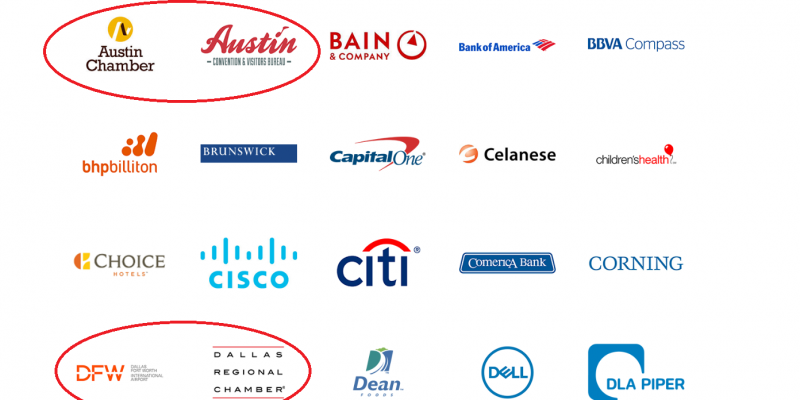 Wednesday was a red-letter day at the Texas Capitol, as a state budget was approved by the House late into the night, increasing spending by 16 percent overall. Local governments played a large part in advocating for this increase in spending.

By contrast, the House State Affairs committee approved that same day HB 281, a bill by Republican Rep. Mayes Middleton to end taxpayer-funded lobbying (if you’re not sure what that is, read our primer here).

Meanwhile, out in the hallway, legislative offices received visits by a cabal of government and big-business representatives attempting to derail religious liberty, free enterprise, and freedom-of-conscience bills.

Some of these same kinds of taxpayer-funded officials and employees testified against HB 281 in February. Though the bill was popular with the grassroots, several local government officials called it an effort to “hush” them. Bill supporters, on the other hand, complained about the very thing taking place in the hallway on Wednesday.

The coalition of taxpayer-funded lobbyists, joined with government relations and PR reps from some major corporations, were distributing the following list of bills they oppose (see image below): 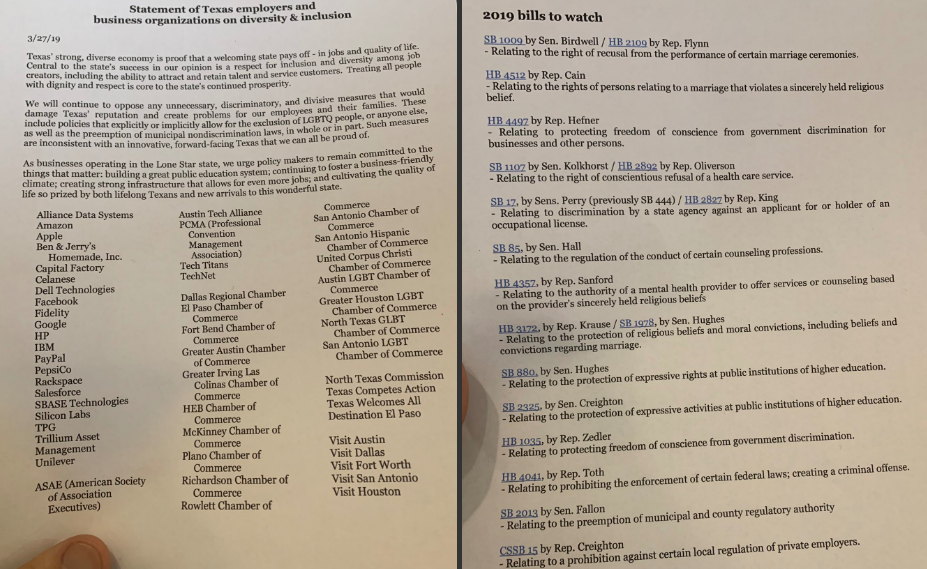 Texas Competes describes itself as “a partnership of business leaders committed to a Texas that is economically vibrant and welcoming of all people, including lesbian, gay, bisexual, and transgender (LGBT) people.” The organization claims that without laws that, for example, allow men into women’s showers and restrooms that the state will be less economically competitive: “The Texas brand matters to businesses because that brand can have an impact on business, municipal, and state competitiveness for talent, entrepreneurship, corporate relocation, and tourism.”

This coalition was formed in opposition to last session’s Texas Privacy Act, SB 6, which they dubbed “the bathroom bill.” SB 6 was blocked by outgoing House leadership, but a Trump executive order addressed much of what the bill sought to do, which is to keep public school and government building showers, locker rooms, restrooms, and changing areas gender-specific.

Although the list of Texas Competes supporters is primarily private-sector entities and corporations, the coalition is spearheaded by the Texas Association of Business along with several big-city convention centers and visitors bureaus — many of which receive funding from cities and counties. On the supporters list we noted:

(This does not factor in the amount of corporate welfare many of the large companies on the list have received from taxpayers.)

Also on the list was Texas Competes Action, their related PAC which dropped $19,000 against Republican candidates in 2018.

One opposed bill in particular, SB 15 (amending the state labor code to prohibit cities from setting terms of private-sector employment, e.g. sick leave mandates and criminal history searches), received a vigorous defense from its author, calling out a possible double-standard when it comes to messaging from the chambers of commerce.

“Dozens of the companies represented at today’s small gathering were supportive of SB 15, but have been threatened and bullied into opposing this pro-business legislation and are terrified by these tactics,” said Sen. Brandon Creighton, of his bill. “Texas businesses small and large have supported the bill, and this false rhetoric is irresponsible when the Texas economy is at stake. It is not new for groups to oppose legislation in efforts to justify their lobby retainers or increase fundraising, but this opposition is anti-business and flat-out dishonest.”

Creighton said a San Antonio city legal brief found no discrimination in SB 15, despite their show of force made along with the Texas Competes coalition.

From the hip: The timing of Texas Compete’s visit couldn’t have been worse for opponents to the taxpayer-funded lobbyist ban bill. It now heads to the House Calendars committee where it is expected to receive a House floor debate. The Senate would likely concur. As for the apparent hypocrisy Sen. Creighton pointed out, it’s clear that large corporations are just that: large entities where the left hand may not know what the right hand is doing.