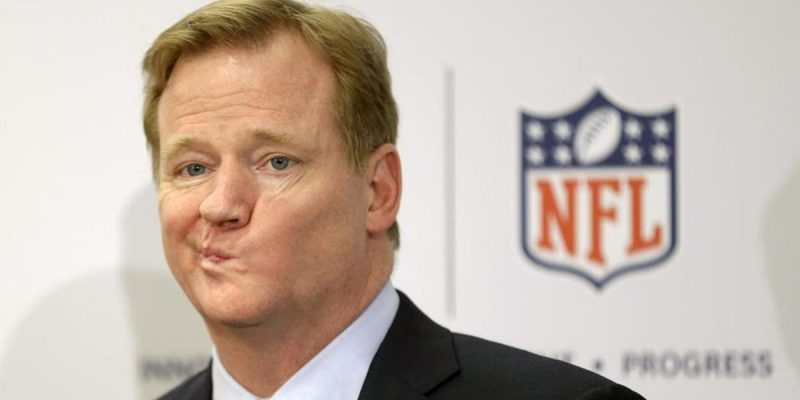 One prominent figure has loomed large over New Orleans Carnival this season.

And I’m not talking about Bacchus LI celebrity Jensen  Ackles.

No the prominent figure to whom I refer is NFL Commissioner Roger Goodell.

And in contrast with the annual Gleason Gras party, Goodell Gras ’19 is hardly a celebration of its titular person.

It’s more like a continuous burning in effigy, complete with marching bands.

Goodell has joined the pantheon of Crescent City villains that include “Bronze John” and “Spoons Butler”.

The former robbed the city of tens of thousands of its denizens during recurring yellow fever outbreaks and the latter allegedly made off with the silverware of prominent locals (and reportedly a wrought iron fence that is now circling the perimeter at a school in Massachusetts).

Goodell has done his fair share of pilfering of the Crescent City.

First there was the lost 2012 season when Goodell suspended key members of the Saints organization connected to the so-called Bountygate scandal.

And then the New Yorker looted coveted draft picks that prevented the Saints from reloading talent during a time where the Saints were seeking to continue their success from the 2009 and 2011 seasons.

And then there was the travesty that took place in the Superdome in late January where an NFL officiating crew CHOSE to not make a penalty call after a blatant premature hit by an LA Ram conerback on a Saints receiver.

The no-call essentially ended the Saints bid to appear in the franchise’s second Super Bowl.

How did Goodell react?

First he hid in a bunker, avoiding the media like a politician caught in a sex scandal, until having to stand before a bank of microphones and cameras on the eve of the Super Bowl.

When the inevitable question came up, Goodell rambled and lied about speaking to Saints players about what happened.

And that was that.

No apologies. No remorse. No compensation. No punishment for the referess who were part of the most egregious no call in the history of professional football.

Patriots won yet another Super Bowl and Goodell returned to New York City hoping the controversy would fade away much like Johnny Football did.

But Nola folks were just getting started, kicking things off with a massive protest/second line/concert that made national news.

The city that care forgot signaled that they wouldn’t be forgetting or forgiving this lifetime as Mardi Gras 2019 got weaponized.

The Krewe du Vieux, the commissioner’s least favorite marching club, took to the streets of the French Quarter featuring a mechanically animated float that the standards of this website do not permit me to describe.

The rest of the krewes got into the act as black and gold “Robbed!” beads and yellow flags were in high demand by float riders.

I’d wager that more yellow flags fell along the St Charles Avenue route in the past two weeks than have landed upon the Superdome’s artificial turf throught the history of the stadium.

A Thoth rider threw out beer koozies with the league’s office phone number printed on it.

The all female Muses’ parade featured a float called “How to Succeed in Football without Really Winning”, a play on their Musicals theme.

The float featured riders dressed up as referees and the sides were decorated with fake playbills such as “Greased” and Goodell’s likeness.

Chaos also had a float related to the infamous NFC Championship game titled The Morning After, comporting with their “Hugs” theme.

Unfortunately due to weather issues, the fragile, century old wagon wheeled Chaos floats did not make it out though the float was pictured in the parade bulletin and in the set of collectors’ cards that is a signature throw.

As usual Krewe d’Etat wanted to do more than run a float. The mirthful mocking men who “live to ride” had a dancing troupe called the Robbin’ Refs in striped shirts with a clown image of the commish on the back that preceded a float that had a sculpture of a referee wearing blindman sunglasses, clutching a guide stick, and sporting an “I Love LA” cap.

I’m sure the folks over at the Zulu hq on Broad are cooking up something special for Mardi Gras Day as are hundreds of truck float riders and thousands of street maskers as the city and devoted fan base gets one more en masse kick at Goodell’s shin while New Orleans is still in the media spotlight.

Never has any city in America managed to pull off an uncoordinated yet massive raking of a non-elected official as thoroughly as New Orleans has at the expense of Goodell.