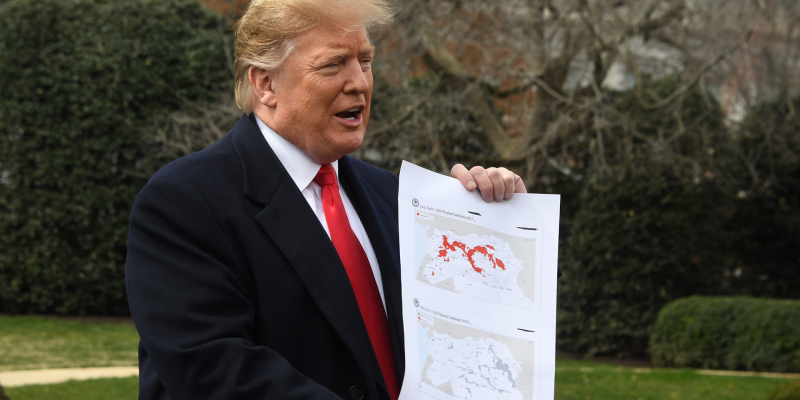 The US-backed Syrian Democratic Forces (SDF) have secured Baghouz, the final stronghold of the terrorist group known as Islamic State (ISIS), ending a five-year nightmare that caused to the deaths of nearly 500,000 people.

The day before, President Trump foreshadowed the development when he presented maps of ISIS territory from before the 2016 election and now, adding that the as “tiny spot” would be “gone by tonight”:

Since my election ISIS has lost nearly all of their territory!

The SDF coalition on the ground was led by the Kurdish YPG who were assisted by the financial aid and air support of the US & UK military. The group estimates that their forces sustained the loss of 11,000 fighters while ISIS losses, by airstrike alone, are estimated to be upwards of 15,000.

Mustafa Bali, had off the SDF press office proclaimed the end of the “so-called caliphate”:

Syrian Democratic Forces declare total elimination of so-called caliphate and %100 territorial defeat of ISIS. On this unique day, we commemorate thousands of martyrs whose efforts made the victory possible. #SDFDefeatedISIS

While they have lost all their territory, allied force are prepared for an insurgency and President Trump cautioned any potential recruits to think twice:

….There is nothing to admire about them, they will always try to show a glimmer of vicious hope, but they are losers and barely breathing. Think about that before you destroy your lives and the lives of your family!

U.S. General Joseph Votel, Commander of U.S. Central Command sent a letter congratulating the SDF on their victory and promising an “enduring defeat” of “Daesh”, a derogatory term used by many Arabs when referring to the terrorist group:

“U.S. Central Command congratulates the Syrian Democratic Forces for leading the final battle in eliminating the so-called caliphate. The meticulous approach to the campaign was a multi-year effort conducted in a complex environment led by our Iraqi and Syrian partners, and supported by the U.S.-led multi-national Combined Joint Task Force-Operation Inherent Resolve.  We and our Coalition partners salute the heroic sacrifices of the men and women who fought together against Daesh, and we mourn the losses of the innocent civilians caught in the midst of their reign of terror. While our collective efforts liberated more than seven million civilians from Daesh’s brutality, we recognize the fight is not over. We remain committed to continuing our efforts to pursue and destroy remnants of Daesh, which are attempting to live on as an insurgency.  We will continue our collective fight to bring about the enduring defeat of ISIS.”

The group had become known for their tactics of extreme violence, online propaganda and video executions. Other atrocities include public be-headings, stoning of women, persecuting Christians, and executing homosexuals. It is estimated that as many as three hundred American citizens attempted to join the jihadist group.

The resounding victory overseas paired with a thriving economy at home will both likely boost President Donald Trump’s re-election chances ahead of the 2020 election.