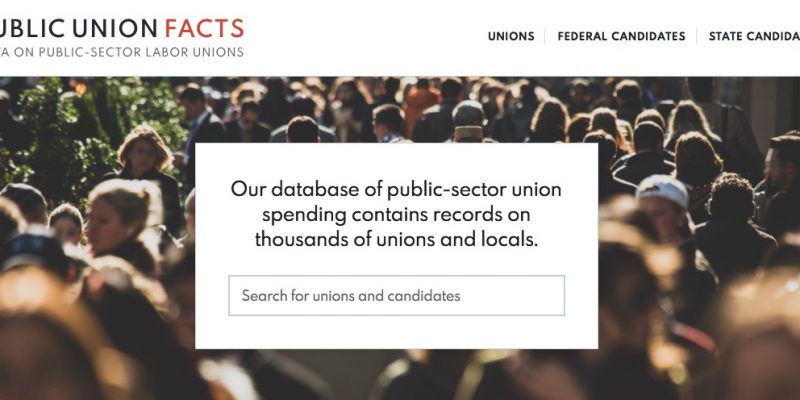 The Center for Union Facts has launched a new website, www.PublicUnionFacts.com, to track more than $1.5 billion in public sector union political spending over the past two decades. It found that these unions give 90 percent of political funding to Democrats.

“There’s a growing disconnect between how public unions are spending money and what workers actually want,” Charlyce Bozzello, the center’s communications director, said. “The breakdown of union members who support Democrats versus Republicans is likely not 90 to 10, as years of union spending would have us believe. With access to more facts, employees can hold their representatives accountable.”

The majority of union spending of $1.2 billion occurred at the state and local level. In all 50 states, public unions spent more on Democratic candidates than on Republicans, the center found. Of the $1.5 billion that was sent directly to Republican or Democrat parties or candidates, 90 percent went to Democrats.

The first of its kind, PublicUnionFacts.com provides an easily searchable database for employees to learn about the political spending of their unions. The site is part of a greater campaign to provide transparency of the nation’s labor movement.

Employees can type their union name into the PublicUnionFacts.comdatabase to learn about its political spending history. The site compiles 20 years of data on public-sector union political spending. More than 385,000 political contributions from nearly 5,000 labor unions have been made easily searchable and sortable for users.

The site also features top analysis highlighting disproportionate amounts of member dues that unions have sent to Democratic causes over the last 20 years, the center notes.

To date, public-sector unions are not required to file financial disclosures with the Labor Department, unlike most private-sector unions, which are required to do so. The best way to determine a union’s spending habits is by finding out information on its political giving, the center notes. But this may prove difficult because the information is often spread across multiple difficult-to-access databases, which is why the center says it created PublicUnionFacts.com.

The site combines information from six different data sets covering both state and federal spending based on information provided by the National Institute on Money in Politics. The data was compared by hand-matching local unions with a national or international affiliate to identify union political spending at both the national and state level.

In Janus v. American Federation of State, County and Municipal Employees, the U.S. Supreme Court ruled that public workers were no longer required to make “fair share” payments to unions in lieu of joining the union as a full member. The court prohibited unions from forcing nonmembers to pay for collective bargaining and other nonpolitical expenses, ruling the mandatory fee violated the nonmembers’ First Amendment rights.

“Now, workers can choose to keep the portion of their dues that would have gone to support predominantly left-leaning causes,” the center says.

According to recent annual reports filed with the U.S. Department of Labor, within one year of the Janus ruling, two of the largest public sector unions in the country lost more than 90 percent of their fee-paying members.

“And that’s exactly why the Janus case was so important for worker freedom,” Eric Boehm at Reason magazine wrote. “Individuals who choose to support a union can continue doing that, and those that do not want to fund union activities are no longer forced to do so. Far from being an outright attack on the right of workers to unionize – which is exactly what unions claimed the Janus case was – the Supreme Court’s decision allows all workers to do as they please.”

Ongoing lawsuits against unions include former fee payers seeking refunds, and individuals and groups challenging the unions’ ability to represent nonmembers or limit when former members can stop paying dues.