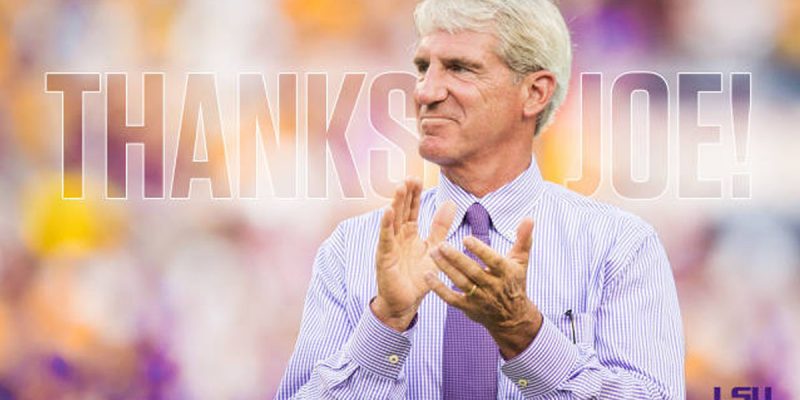 This afternoon a press release from LSU confirmed what had been bouncing around message boards, social media and even news reports all day – namely, that athletic director Joe Alleva’s time was up…

LSU and Vice Chancellor and Director of Athletics Joe Alleva today announced he is stepping down from his current position and is transitioning to a new role as special assistant to the president for donor relations.

Alleva will continue to serve in his current role until a new athletics director is named.

“We are grateful to Joe for his years of service and dedication to LSU,” said LSU President F. King Alexander. “Under his leadership, LSU Athletics has become even more nationally competitive and our student-athletes have reached new levels of academic achievement.”

“The eleven years Annie and I have been here in Baton Rouge have been some of the best in our lives,” said Alleva. “We have made lifelong friends and memories in Louisiana. This is truly a special place. It’s been an honor to serve LSU, and I am proud to continue to do that in a new role.”

Under Alleva’s leadership, LSU’s athletics thrived on the field of play, in the community and in the classroom. Alleva also successfully managed the department’s finances and operations making LSU one of the nation’s top 10 programs in revenue, tickets sales and commitment to student-athletes and athletic endeavors.

In the classroom, LSU made historic strides in graduation rates, seeing a 31 percent increase since taking over in 2008. During a 10-year stretch from 2008-17, LSU’s graduation success rate for student-athletes improved each year, reaching an all-time high of 90 percent.

While at LSU, Alleva oversaw the expansion of the Tiger Stadium South End Zone and Westside renovations, executed an aggressive campaign to preserve and enhance the appearance of Tiger Stadium that has included the installation of new windows, lighting systems, gating systems and championship plazas, in addition to newly renovated restrooms and concession areas.

A number of new or newly renovated facilities opened during his time at LSU, including Gymnastics Practice Facility, Tennis Center, Beach Volleyball, new Track & Field offices, the Nutrition Center for LSU Student-Athletes, Softball Performance Center, and the Football Operations Center, among others. Alleva also supervised a major renovation to the University Club golf course that allows the LSU golf teams to play on one of the most challenging courses in the country.

To continue to enhance fan experience, the largest video boards in the country for basketball, baseball and softball were added during Alleva’s tenure as athletics director.

On a national level, Alleva spent five years on the prestigious NCAA Men’s Basketball Committee, as well as serving on numerous other national committees, including the Football Bowl Certification Committee, the NCAA Division I Championships/Competition Cabinet and several SEC committees.

Prior to joining LSU, Alleva served as director of athletics at Duke for 10 years from 1998-2008. During his 10-year stretch at Duke, he oversaw one of the most successful decades of Duke Athletics in school history, winning more ACC and NCAA titles than in any other decade in its history.

Alleva, who earned his bachelor’s degree in finance from Lehigh in 1975, was the quarterback of the football team and team captain in 1974. He also played on the baseball team and served as a graduate assistant football coach, earning an MBA in 1976.

Alleva and his wife, Annie, have three children, J.D., Jeff and Jenny, and six grandchildren.

This morning the Baton Rouge Business Report broke the story that Alleva was out, and numerous other media outlets sourced the Business Report article for their own stories. No independent confirmation of the Alleva ouster came until just after noon when the Baton Rouge Advocate ran a piece quoting an unnamed member of the Board of Supervisors as confirming the change.

Here’s what we understand has happened.

Yesterday there was a closed-door meeting of the LSU Board of Supervisors, with the only publicly disclosed agenda item being to discuss “litigation involving the university.” Several possibilities have been bandied about as covering that rather vague description, but what we understand is the meeting involved the status of former Senior Associate Athletic Director for Operations and Facility Enhancements Ronnie Haliburton, who was let go last month under some interesting circumstances – and something in Haliburton’s conduct prior to being fired, we’re not sure what, put LSU in a position to be sued.

Supposedly Alleva attempted to cover up whatever it was that Haliburton had done, and that’s what led Board of Supervisors chairman James Williams to call the vote for his ouster.

The decision was done last night at Tuesday’s executive session, the member said. Not all board members were involved and some are miffed and some were not supportive.

We’re told the stories about Williams getting together with LSU megadonor Richard Lipsey to form an anti-Alleva posse are true, but there was also intervention by Gov. John Bel Edwards’ office in the person of Commissioner of Administration Jay Dardenne who lent weight toward the ouster.

And one former LSU Board of Supervisors member went out on a limb to ring some church-bells over Alleva’s ouster.

The tumultuous term of LSU athletic director Joe Alleva appears to be ending very soon, and that cannot come soon enough for former LSU Board of Supervisors member Stanley Jacobs.

“I’ve read and heard the stories, and it’s an excellent idea,” said Jacobs, a New Orleans lawyer who left the board less than a year ago after serving since 1997. “If that happens, I feel great about it. In fact, I haven’t felt this well in years.”

In a tweet by Glenn Guilbeau, the writer of the Stanley Jacobs article for USA Today, Jacobs was quoted as going even further…

“I tried to take him out years ago, but I swung and missed. And now it looks like the Board and administration have finally got it – if the story is true. I tried fervently to take him out.”

Jacobs was a key player in an attempt last year by members of the Board to send Alleva packing, though he couldn’t get a majority of votes on the board to make a change.

With Alleva out, that opens up another interesting question – who comes next? In our post this morning about the prospect of a change in that position we discussed a few possibilities but as of right now it looks like there is only one LSU is focused on, and it’s bringing home one of Baton Rouge’s favorite sons…

Hearing that A&M AD Scott Woodward, who grew up around #LSU and worked there, could be very tempted by the Tigers’ AD vacancy. A&M’s own thorny leadership dynamic at the top in College Station could be a factor. https://t.co/xnAaXyE5di

The thing to understand about the prospective Scott Woodward hire – and in an interview with ESPN 104.5 FM host Matt Moscona this afternoon, 247Sports.com Texas A&M expert Billy Liucci stated that it would be “stunning” if Woodward wasn’t LSU’s man – is that this also involves Dardenne.

Per multiple sources, Scott Woodward has signed on to become LSU’s next Athletics Director. The Baton Rouge native is heading home.

Woodward was Vice Chancellor for External Relations at LSU from 2000-04. Part of that job, as it was constructed for Woodward, who had been a political consultant in Baton Rouge prior to going to work at LSU, was dealing with, if not lobbying in front of, the state legislature. And at that time State Sen. Jay Dardenne was one of the key legislators in pushing LSU’s various agenda items at the Capitol. So there is a long-standing relationship between Louisiana’s current Commissioner of Administration and Texas A&M’s athletic director which would inform an effort to bring Woodward home.

Lipsey would also play a role in such a move. Woodward’s contract buyout at Texas A&M is only about $40,000, but he makes $900,000 per year in his current job – about $175,000 a year more than Alleva makes. To move him from Texas A&M LSU is likely going to go a good bit over $1 million a year, perhaps as high as $1.2 million. That would involve a bit of fundraising, which Lipsey is helping with. Lipsey, in fact, is a political ally of Dardenne’s of long standing.

Another part of the External Affairs job Woodward held under Mark Emmert at LSU and at Washington before moving into athletic administration was donor relations. That’s an aspect of prime importance at LSU currently, seeing as though the university is in the middle of a $1.5 billion capital raise which is behind schedule and hitting lots of resistance by prospective donors unsatisfied with Alleva and school president F. King Alexander. Making a move to a hot prospect like Woodward would be seen as a great investment given the flailing Fierce For The Future campaign – some $600 million of which was hoped for as the Tiger Athletic Foundation’s portion of the burden.

And the word is the Woodward move will be happening very quickly, perhaps within the next week.

So after a protracted length of time when effective leadership and the pursuit of excellence with respect to university administration at LSU has been noticeably lacking it’s beginning to appear that the movers and shakers involved have begun to act.

Interested in more news from Louisiana? We've got you covered! See More Louisiana News
Previous Article Is Today Finally The Day Joe Alleva Is Out As LSU’s Athletic Director?
Next Article Hayride Radio 4-17-19: Alleva Is Out, And Woodward Is In