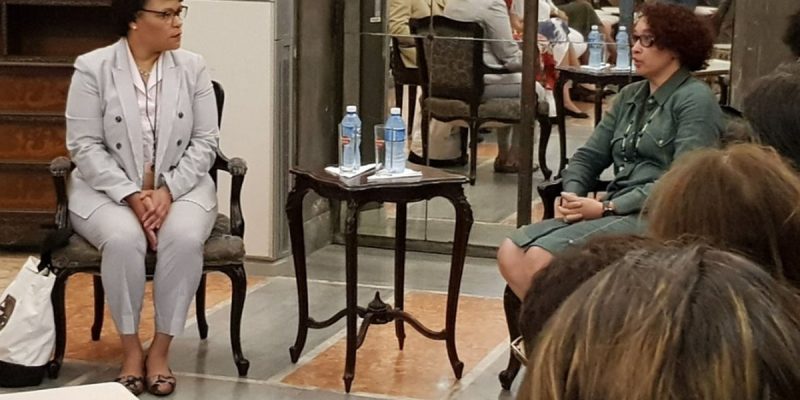 On Friday the Cuban government announced that it would begin rationing basic food items such as eggs,  sausages, rice, and powdered milk.  The post-Castro but still very unapologetically Communist government blames the Trump Administration’s hardline approach towards the totalitarian state for the sad state of affairs though the most likely cause for the uptick in their misery index is that the “socialist paradise’s” primary sponsor, Venezuela, is in an economic tailspin of its own.

Apparently Communism only kinda sorta barely works when someone else is footing the bill.

Yet the folks at City Hall had to go find this out for themselves.

Last month New Orleans Mayor LaToya Cantrell and a delegation of 34 other city officials and their significant others made an unannounced visit to the island nation.

Why did the mayor of New Orleans need to go to a Communist country?

State officials and members of the state’s congressional delegation have been to Cuba over the past few years mainly to push the sale of the state’s agricultural goods.  As an editorial from the honchos of the Times Picayune pointed out visits by then-Governor Kathleen Blanco and Agricultural Commissioner Mike Strain paved the way for the import of rice from southwest Louisiana farmers, a benefit for both our state’s ag industry and a nation where food has become increasingly scarce.

However New Orleans isn’t exactly Green Acres.  According to 2012 USDA census data, Orleans Parish has five acres of vegetable farming and one acre of land dedicated to lettuce farming.  And the biggest cash crop being traded in the city isn’t going to be found at a salad bar.

Well there’s the port.  Now this would kind of make sense.  Once the Communists finally wave the white flag (and this will happen very soon after Maduro leaves Caracas either on a plane or in a hearse), Cuba will truly be open for business for the first time since the Eisenhower Presidency.

Port officials have already visited with officials in Havana to discuss adding the deep-water port in the heart of Old Havana for shipping and cruise ship arrivals.

So why did the mayor say she went?

One of the great canards that is circulated about Cuba is the quality of their health care.  If CommieCare is so great then why was Hugo Chavez the only foreigner of standing to travel to Cuba for an operation? And we all know how that worked out.

I don’t recall Mick Jagger of the Rolling Stones going to a Havana free clinic for his heart procedure.  For that matter, Sir Michael Philip did not get his operation in his native England either.

Economic development?  The country cannot feed itself. And what do they have to trade with? Car parts from a 1959 Cadillac and a few cases of Havana Club?

Education? Considering the state of public education in Orleans Parish, I really don’t feel I am in a position to judge but will concede that they are probably more resolute in handling scofflaws who engage in senior pranks than the locals.

Quality of life?  I could have saved the city some money here.  I visited Cuba on the eve of Donald Trump’s inauguration to support the Catholic Church there and engage in Christian worship in a Communist country.

I found neither food nor prosperity there.  The former was scarce even at the airport where there were three food options: ham sandwiches, cheese sandwiches, and, wait for it, ham and cheese sandwiches.  Otherwise the food shelves were full of nothing.

The main difference between the dilapidated crack houses in central city and the decaying facades of once grand homes around Havana that are used as brothels is that the latter are historic structures.

What architectural beauty Havana still possesses has been retained from the Spanish colonial governments and the pre-Castro regimes and not created by the Communists.  The stuff built under Castro sticks out like an infected thumb, including a sky rise crumbling housing project looking building that appropriately enough houses their Ministry of Health and the Orwellian Soviet embassy that can only be improved with the assistance of a wrecking ball.

Thus far the only thing Mayor Cantrell had brought back from Havana was contempt for a meddlesome free press that had the temerity to question the trip and not give her the benefit of the doubt.  So maybe it was educational in some way.

But I would like to throw in another query: why Cuba and why not Haiti, El Salvador, or Honduras?

All three would be more relevant than Cuba.  Culturally Haiti has the most important tie to the Crescent City of any other New World country, as many of the free people of colour who formed the city’s professional class (and defenders during the Battle of New Orleans) had fled revolutionary Haiti.

Central America is where many of the city’s current foreign-born residents originally hail from.

Dare I speculate that these three countries are not the most ideal locales to spend a holiday?

In the early hours of Mothers’ Day, the city was once again inundated with rain, flooding New Orleans so severely that RTA service had to be suspended and streets remained underwater hours after the torrential storms had passed.

Let’s hope the Cuban government may have divulged whatever secrets they possess about flood control and pump operations to Mayor Cantrell.

Interested in more news from Louisiana? We've got you covered! See More Louisiana News
Previous Article SADOW: The Hotel Tax Deal Cooked Up By NOLA Pols Is A Bad One, And It Should Fail
Next Article F. King Alexander’s House Is For Sale In Baton Rouge, And The Rumors Are Running Wild