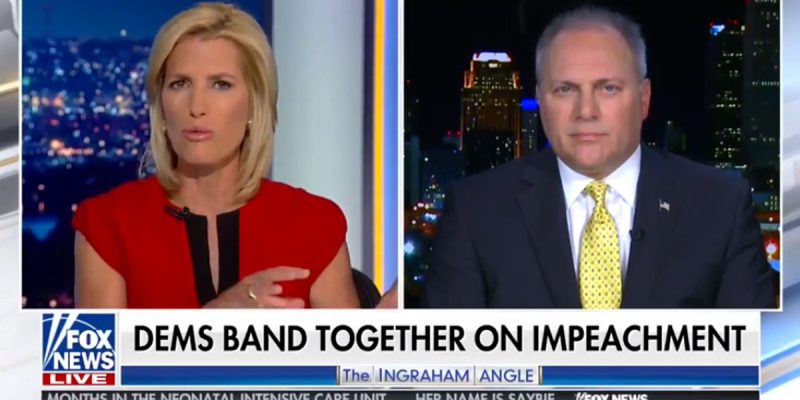 Last night, House Republican Whip Steve Scalise (R-La.) did a segment on Fox News Channel’s The Ingraham Angle,  and the video of his appearance is worth passing along. Scalise certainly had his whip hat on, and a lot of what he said is pretty boilerplate stuff you’d expect the GOP whip in the House to say, but he certainly isn’t wrong in any of it.

Especially considering what happened yesterday. Essentially, Robert Mueller officially threw in the towel and admitted he had nothing on President Trump and that his investigation was never going to reveal any evidence of the absurd accusation that Trump had colluded with Vladimir Putin to fix the results of an American election. Mueller embarrassed himself and disgraced the office he’s held the past two years by making the ridiculous statement that “if we had confidence that the president clearly did not commit a crime, we would have said so,” which led to a fresh frenzy among House Democrats for impeaching Trump, which as The Federalist’s Sean Davis rightly concludes proves that Mueller was always engaged more in a political hit job on Trump than any real investigation of wrongdoing. Nevertheless, Mueller’s appearance to give a statement on the conclusion of his time as a special counsel has closed the door on this issue as a reasonable path forward for the House Democrats.

But they’re insistent on spending the rest of their time as the majority in the House of Representative beating on that door. One can’t help but think Scalise has a front row seat to this show, and realizes he’s going to be back in the majority leadership in the House quite soon as a result – and that’s why he opted not to run for governor of Louisiana even despite Trump urging him to.

On House Democrats’ push to impeach the President:

“This has been [the Democrats’] plan all along. They’ve been pushing for impeachment since the day they won the majority. Many of them couldn’t hide it. Nadler was bragging about it. You saw others in their own leadership on the Democrat side saying this is what they were going to make their two-year majority about.

On the bad actors within the Department of Justice that targeted the Trump campaign:

“In fact, the only collusion that happened were the officials at the Department of Justice, at the FBI, even in the Obama administration who were spying on the Trump campaign. Ultimately, when you look at some of the things that happened, they had a partisan agenda within the FBI to take down this President before he was elected. People aren’t going to stand for this. If they want to pursue this road, it’s going to be at the peril of their majority.”

On House Judiciary Committee Chairman Jerry Nadler’s failure to address the real crisis at the border:

“The very committee that has jurisdiction over the crisis at the border—that is real today with more than 4,000 people a day crossing our border illegally—that is the committee that is chaired by Jerry Nadler that is focused on this witch hunt, going down rat holes to try to impeach the President even when there is no proof and there was no collusion.”

On the motivation behind the Democrats’ investigations:

“… it’s the only way they can appease their radical left base.”