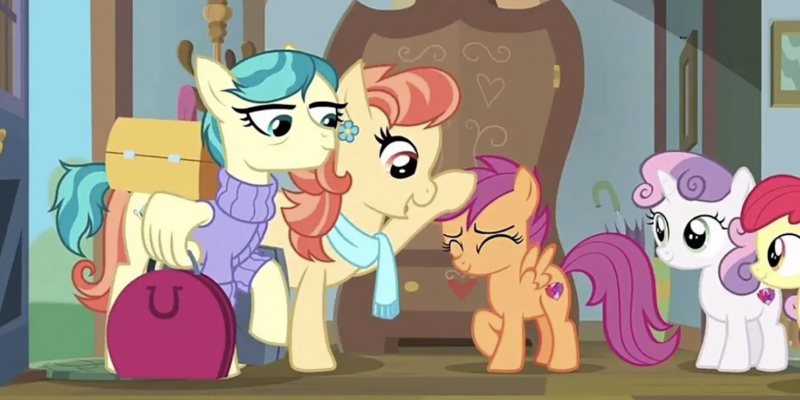 In 1981 Hasbro debuted My Little Pony as a new toy line for girls. Colorful manes, designs on their bodies, and brushes for their hair were just as popular as Strawberry Shortcake and other wholesome dolls.

Not anymore. Now 38 years later the entertainment franchise is pushing perversity among ponies.

In its latest of the franchise cartoon episode, “The Last Crusade,” the writer and producer characterizes the dolls as lesbians who are in a relationship.

“I think it’s fantastic that we can show that what truly defines a family is love — that, to me, is the core of My Little Pony,” co-showrunner Nicole Dubuc told Buzzfeed News on Wednesday. “Nicole and I thought this was a great opportunity to organically introduce an LGBTQ couple in the series, and we asked Hasbro and they approved it,” writer and producer Michael Vogel told the outlet.

The episode, titled “The Last Crusade,” introduces Aunt Holiday and Auntie Lofty, a lesbian couple who take care of the character Scootaloo.

“My Little Pony has always been about friendship and accepting people (or ponies) that are different from you,” Vogel continued.

Not really. It it never had a political agenda to indoctrinate children about a sexual lifestyle.

Hey hey!!! @NicoleDubuc , @joshhaber and I doin what we can to bring more EQuality to EQuestria!! #PrideMonth https://t.co/YPOvvxT3v0

Love. It isn’t just for breakfast anymore!
I get more and more proud of season 9 with every episode. Way to go @NicoleDubuc and @mktoon! https://t.co/C2s1tMN1tH

Little girls, and children in general, should not be exposed to this. The franchise destroyed what was once a simple fund toy for girls to play with.