Perhaps if you think private commerce is evil, like most of today’s Democrat Party seems to, you wouldn’t see CNBC’s recent ranking of Louisiana as only the 46th best state in America in which to do business as a bad thing.

If you’re not one of the new “democratic socialists” or other economic illiterates roaming the fruited plain, however, you might see this as evidence of an abject failure – and you might be looking for somebody to blame for it.

Another business list, another dismal ranking: This time it’s Louisiana coming in at 46th on CNBC’s annual Top States for Business report, beating out only Alaska, Mississippi, Hawaii and Rhode Island.

“The good times are not rolling in a state with one of the nation’s weakest economies. Falling energy prices do not help,” CNBC wrote of Louisiana, citing poor ratings in the workforce, economy, infrastructure, quality of life, technology, business friendliness, cost of living and access to capital categories.

In fact, Louisiana received either a D or an F grade in all of the categories in the report except for the “cost of doing business” category, for which it received an A-.

To rank the states, CNBC used U.S. Census Bureau data to create its grades. The categories used were weighted according to how frequently states use them as a selling point in economic development marketing materials so that the study ranked states using the attributes they use to sell themselves.

Virginia, Texas and North Carolina were the top three states, each of which received high grades in the workforce, economy and access to capital categories. 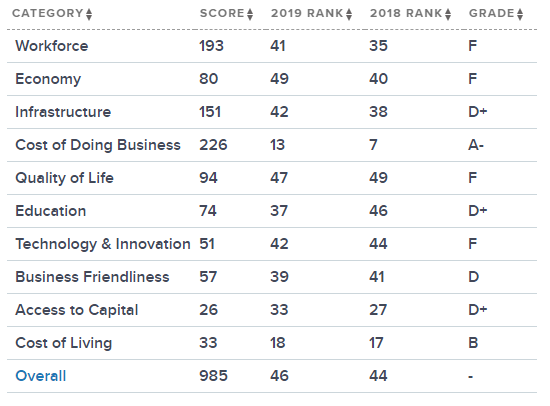 To rub salt in the wound, three of Louisiana’s other nearby competitors – Georgia (#6), Florida (#12) and Tennessee (#13) – ranked among the best business locales. Other less-advanced Southern competitors still put Louisiana to shame: South Carolina (#34), Alabama (#37), Kentucky (#39) and Arkansas (#42).

When Mississippi, which has almost nothing to work with as an incentive to attract business and whose largest city is in an advanced state of Democrat Party-induced ruin, is the only Southern state Louisiana has a better ranking than, it’s a clear failure.

Unless you’re with these guys, that is.