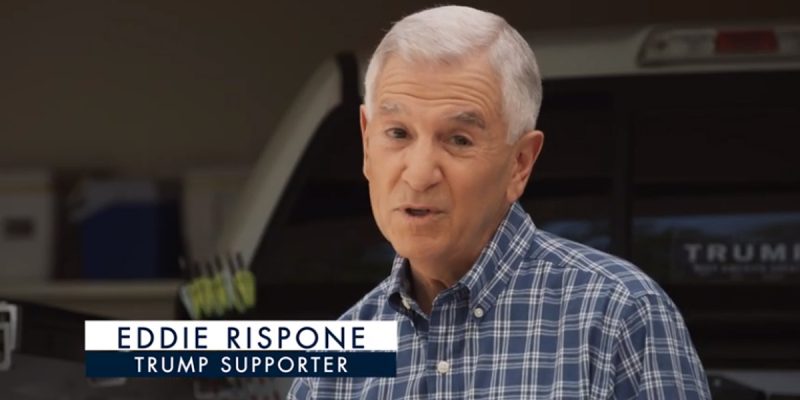 He’s had a few web ads go out already, so there has been a window into Eddie Rispone’s plans for a campaign message as the 2019 Louisiana gubernatorial election gets rolling. That means this ad, which we understand will be all over television sets tomorrow with a sizable ad buy from Rispone’s campaign – the word is when it’s all said and done he’ll be spending some $13 million on media – isn’t a surprise.

Today, Eddie Rispone for Governor announced its first major television advertising buy of the 2019 gubernatorial race. The first ad campaign will begin on Tuesday July 23, run for approximately two weeks, and is backed by an over $1 million spend. The ad flight will run statewide in every media market on broadcast, cable, and satellite television. The Rispone campaign will remain on television through Election Day on October 12.

Rispone added on the announcement, “I am proud to stand with President Trump. I have been unequivocally supportive of the President since day one, and will proudly work with him as governor to defend our constitution and secure our borders.  Louisiana needs someone like President Trump—a conservative, outsider, and businessman—to take on the status quo and turn this state around.”

What to make of this?

Well, one thing is pretty obvious – and that is that Tony Fabrizio, Rispone’s pollster who worked on the Trump campaign, had a lot to do with helping to craft the message for the spot.

Immigration is an issue which tests through the roof in every issue survey pollsters do in Louisiana, just like it does around the country. It isn’t just Rispone who’s pushing an immigration message in this race – Ralph Abraham has pushed out a number of messages talking about how New Orleans is a sanctuary city and how he’ll put an end to that when he’s governor. Rispone says the same; in fact, he took out an ad Friday in whatever they’re calling that newspaper in New Orleans these days to declare the party is over as soon as he’s governor.

We’re as hawkish on immigration policy as the next conservative blog, but we can’t help but scratch our heads at the attention paid to the issue. Yes, cracking down on New Orleans as a sanctuary city is proper state policy, and things like making sure illegals aren’t voting or catching welfare checks in the state are reasonable policy items. But they fall largely under the ambit of things which are a governor’s job rather than a reflection of a real reform agenda that will pull Louisiana off the bottom of the public policy metric rankings. There just aren’t all that many illegals in Louisiana; our problems seem to stem a lot more from lack of achievement and bad behavior from our own citizens, which is a tougher nut to crack.

Though the key to winning elections isn’t coming up with brilliant things to talk about so much as it is to find things the voters want done and then convince them you’ll do those things. It’s pretty clear Fabrizio’s polling identified immigration as one of those things, so Rispone is highlighting it. And while readers of The Hayride might well be a great target market for Rispone’s campaign message, if we’re being honest our little community here isn’t enough to win a statewide election in Louisiana with. He’s reaching out to people a bit less politically engaged than we are.

Tying himself in with Trump is also fairly clearly a poll-tested item. Rispone doesn’t carry the bombast and showmanship the president brings to the table, as he’s a lot more of a soft-spoken guy, but he’s got a similar story as a super-successful businessman who spent a lot of years cutting checks to politicians before deciding he ought to take the bull by the horns and try to solve the problems himself. That he was a donor to Trump’s campaign puts him in a position to hew a little closer to the president than Abraham, though we’re not sure voters are really going to judge the two candidates by who’s more aligned with Trump.