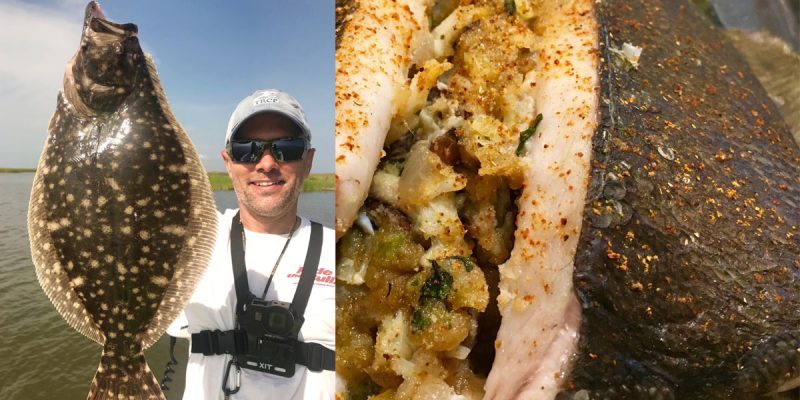 Bycatch can be a problem in fishing. If you’re catching speckled trout, and a big bull redfish crashes the party, stealing your bait and taking you off your point for a 30-minute tug-of-war, you’ll probably be pretty annoyed. The same is true if you’re targeting redfish and a gafftop slimes up your line.

But no one is EVER disappointed — no matter what they’re targeting — to look in the water and see what’s causing the bend in their rod is actually a doormat flounder.

That happened to me during a trip last week to Lake Borgne in Southeast Louisiana. The redfish were biting really well, so that’s what I assumed I had when I set the hook. Another red would have been fine, but I was elated to look down and see that classic flat profile and dark-brown side.

I should have netted the fish, but in the moment, I decided to swing it over the gunwale. Fortunately, the line and hook held.

The fish wasn’t in the cooler 10 seconds before I began to plan when and how I’d prepare it. My go-to with flounder is to stuff the fish with onions, celery, garlic, bell pepper, a mixture of other ingredients and, of course, bread crumbs, but before I do that, I debone it entirely, making the fish a real joy to eat.

I took this one a step further, however. Two days prior, I had boiled six dozen crabs, and picked the leftovers, storing the meat in my fridge. There was plenty enough to add a little to the stuffing, and it made an excellent dish indescribably good.

Check out the video below.

Like the video? Please give it a thumbs-up, and subscribe to the Marsh Man Masson channel on YouTube. Also, leave a comment below. How long has it been since you’ve caught a flounder? Do you plan to debone and stuff the next one you catch?

Interested in more news from Louisiana? We've got you covered! See More Louisiana News
Previous Article Abraham’s “The Truth” Ad Might Be The First Real Score Of The Gubernatorial Campaign
Next Article MARSH MAN MASSON: Gobs Of Speckled Trout In Sight Of Mississippi River!