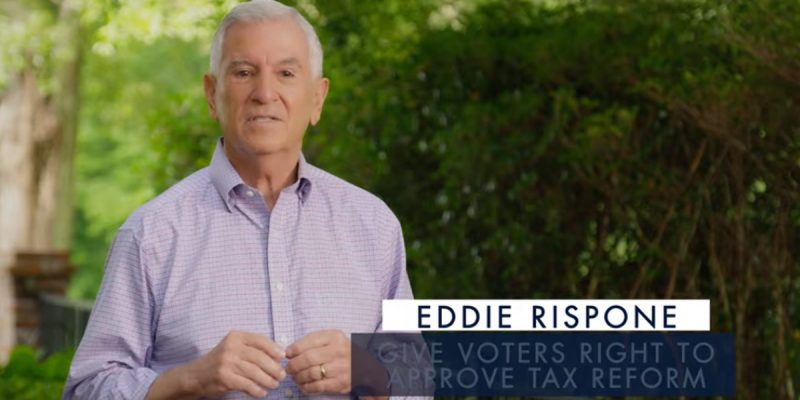 Thankfully, the back-and-forth throwing of elbows between the Ralph Abraham and Eddie Rispone camp hasn’t quite made it to television yet, but after a 2015 campaign when three Republicans spent their time burning each other down and giving John Bel Edwards a free pass into the governor’s mansion one would have to excuse Louisiana’s conservatives for reaching for the Pepto-Bismol every time Abraham or Rispone lays into a fellow Republican rather than Edwards himself.

Rispone doesn’t really do that in his newest ad, though there is a shot at “career politicians” in it…

You could interpret that part as a shot at John Bel Edwards, who is much more of a career politician than Abraham (the latter never ran for anything until he was in his 60’s). But why not just name Edwards, then?

Otherwise, the ad seems better than Rispone’s first two spots on a number of counts. First, while it’s still too heavy on national stuff rather than Louisiana issues – the immigration thing seems like it’s going to get included in every single Rispone spot until Election Day – at least this time there is more state-centric material in it. Work requirements for welfare is a bit generic; the big ticket item there is work requirements for Medicaid. But there is no real need to get too much into the details, particularly when “welfare” is the key word if you want to move the needle with conservative voters. And then there’s this idea of putting all tax increases or reform to a vote of the people which is somewhat new; what we’d prefer is just to elect a conservative legislature that kills tax increases in committee so we don’t have to even bother ourselves with such nonsense.

And it obviously has a lot more personality than the first two ads, what with the “Boom, there it is” piece at the end. We’re more used to “Woot, there it is,” but Rispone’s allowed to have his own take on the expression we suppose.

Meanwhile, there was an interesting development from the other Republican camp in the campaign. Yesterday Ralph Abraham’s team put out a press release announcing they’re making a $2 million ad buy for the primary campaign…

Republican Ralph Abraham is jumping into the TV ad fray in the Louisiana governor’s race, with his campaign announcing Monday it was locking in $2 million in advertising time and will start running his first campaign spot next week.

“We’ll be up statewide on cable, and we’ll be up in multiple markets on broadcast, and we’ll be adding markets as we get closer to Election Day,” Rainey told The Associated Press.

Abraham’s preliminary ad buys total a little more than $2 million, Rainey said. He said the campaign will “be adding to that significantly as we get closer to the election.”

Abraham, a doctor from Richland Parish, is trying to combat the perception that he can’t compete with Edwards and Rispone. Abraham’s campaign bank account lags his competitors’ financing.

Seeing as though Abraham posted a $1.3 million cash-on-hand figure in last month’s campaign finance statement, a $2 million ad buy would seem to be a pretty big deal. It’s an indication that campaign is beginning to pick up steam in fundraising, which would make sense given the announcements of his finance team in late June. To go from $1.3 million in cash on hand at the end of June to being able to put up a $2 million ad buy five weeks later would suggest they had a million-dollar month in July, or close to it.

Either that or Abraham is willing to go into his own pocket, which would be a game-changer of sorts. He doesn’t have the kind of money Rispone does, but Abraham is capable of self-funding to a decent extent.

Either way, this is something of an answer to the No. 1 thing Abraham’s campaign has been dogged for – lack of money compared to Edwards and Rispone. Two million bucks is enough of an ad buy to get a message out in Louisiana, providing that message resonates.

Rispone’s camp is of the firm belief that his air war – they’ve already booked $5 million in TV spots – will overtake Abraham in the polls. We haven’t seen any evidence that’s happening, but it’s far too early to expect that or even assess how possible it is. There is no publicly available polling since Rispone’s ads went up, and nobody has seen the TV spots Abraham will run so what his message is and whether the delivery is any good is still unknown.

One thing is for sure, though – the more this campaign goes along, the more friction between these two camps begins to build. We’d like to see a lot more focus on beating Edwards than beating each other, and we’re waiting for that overdue focus to materialize in these TV spots.