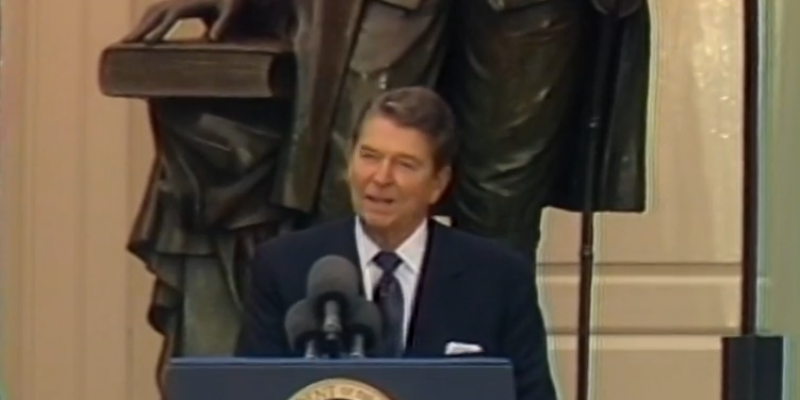 Former President Ronald Reagan reminded a room of Barry Goldwater supporters in 1964 that the Constitution has contained at its very core a controversial idea since its inception.

This idea remains “the newest, most unique idea in all the long history of man’s relation to man.” Alas, 230 years (175 at the time of the speech) is enough time for a nation to forget what a rare mix of talent, philosophy, work ethic, fighting spirit, and spiritual excellence went into writing our guiding document.

This radical idea? We’ll let The Gipper have the mic for Constitution Day 2019.

Watch the video below, or read the text. (Keep in mind, this was a campaign speech Reagan used many times and adapted for various audiences — the text may differ from the video.)

I am going to talk of controversial things. I make no apology for this.

It’s time we asked ourselves if we still know the freedoms intended for us by the Founding Fathers. James Madison said, “We base all our experiments on the capacity of mankind for self government.”

This idea? that government was beholden to the people, that it had no other source of power is still the newest, most unique idea in all the long history of man’s relation to man. This is the issue of this election: Whether we believe in our capacity for self-government or whether we abandon the American Revolution and confess that a little intellectual elite in a far-distant capital can plan our lives for us better than we can plan them ourselves.

You and I are told we must choose between a left or right, but I suggest there is no such thing as a left or right. There is only an up or down. Up to man’s age-old dream-the maximum of individual freedom consistent with order or down to the ant heap of totalitarianism. Regardless of their sincerity, their humanitarian motives, those who would sacrifice freedom for security have embarked on this downward path. Plutarch warned, “The real destroyer of the liberties of the people is he who spreads among them bounties, donations and benefits.”

The Founding Fathers knew a government can’t control the economy without controlling people. And they knew when a government sets out to do that, it must use force and coercion to achieve its purpose. So we have come to a time for choosing.

Public servants say, always with the best of intentions, “What greater service we could render if only we had a little more money and a little more power.” But the truth is that outside of its legitimate function, government does nothing as well or as economically as the private sector.

Yet any time you and I question the schemes of the do-gooders, we’re denounced as being opposed to their humanitarian goals. It seems impossible to legitimately debate their solutions with the assumption that all of us share the desire to help the less fortunate. They tell us we’re always “against,” never “for” anything.

We are for a provision that destitution should not follow unemployment by reason of old age, and to that end we have accepted Social Security as a step toward meeting the problem. However, we are against those entrusted with this program when they practice deception regarding its fiscal shortcomings, when they charge that any criticism of the program means that we want to end payments….

We are for aiding our allies by sharing our material blessings with nations which share our fundamental beliefs, but we are against doling out money government to government, creating bureaucracy, if not socialism, all over the world.

We need true tax reform that will at least make a start toward I restoring for our children the American Dream that wealth is denied to no one, that each individual has the right to fly as high as his strength and ability will take him…. But we can not have such reform while our tax policy is engineered by people who view the tax as a means of achieving changes in our social structure….

Have we the courage and the will to face up to the immorality and discrimination of the progressive tax, and demand a return to traditional proportionate taxation? . . . Today in our country the tax collector’s share is 37 cents of -very dollar earned. Freedom has never been so fragile, so close to slipping from our grasp.

Are you willing to spend time studying the issues, making yourself aware, and then conveying that information to family and friends? Will you resist the temptation to get a government handout for your community? Realize that the doctor’s fight against socialized medicine is your fight. We can’t socialize the doctors without socializing the patients. Recognize that government invasion of public power is eventually an assault upon your own business. If some among you fear taking a stand because you are afraid of reprisals from customers, clients, or even government, recognize that you are just feeding the crocodile hoping he’ll eat you last.

If all of this seems like a great deal of trouble, think what’s at stake. We are faced with the most evil enemy mankind has known in his long climb from the swamp to the stars. There can be no security anywhere in the free world if there is no fiscal and economic stability within the United States. Those who ask us to trade our freedom for the soup kitchen of the welfare state are architects of a policy of accommodation.

They say the world has become too complex for simple answers. They are wrong. There are no easy answers, but there are simple answers. We must have the courage to do what we know is morally right. Winston Churchill said that “the destiny of man is not measured by material computation. When great forces are on the move in the world, we learn we are spirits-not animals.” And he said, “There is something going on in time and space, and beyond time and space, which, whether we like it or not, spells duty.”

You and I have a rendezvous with destiny. We will preserve for our children this, the last best hope of man on earth, or we will sentence them to take the first step into a thousand years of darkness. If we fail, at least let our children and our children’s children say of us we justified our brief moment here. We did all that could be done.