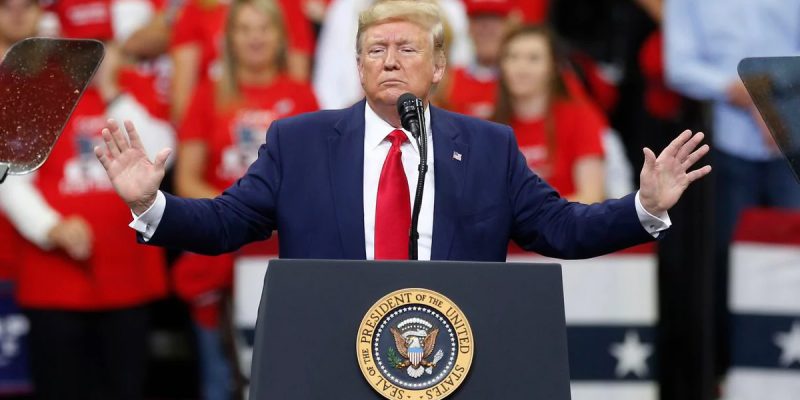 On Thursday night, President Trump entertained 20,000 enthusiastic supporters in Minneapolis, Minnesota at the Target Center. Another 20,000 or more supporters were unable to get into the arena. The event was pure Trump as he excoriated Joe Biden and his son Hunter as well as the impeachment inquiry which is the latest Deep State and Democratic Party scheme to overthrow the 2016 election results.

Once again, the President scored a home run at the wild rally. It indicated his desire to target states that Hillary Clinton won in 2020. In recent months, he has been holding rallies in “blue” states such as Minnesota, New Mexico, and New Hampshire. Last year, he also held a rally in Nevada, which is another state he believes he can win in 2020.

Democrats know that the President can attract record crowds at whatever state he visits, even if it is one that Hillary Clinton carried in 2020. Therefore, they work overtime to create roadblocks for the rallies.

Prior to his speech Thursday night, Minneapolis Mayor Jacob Frey demanded the Trump campaign pay $530,000 for extra police presence, street closures and barricades. Obviously, the Trump campaign balked at the clear “extortion” and prepared to file a lawsuit. It was eventually resolved when the Target Center agreed to hold the contracted event despite receiving no payment from the Trump campaign.

While Minneapolis leaders tried to extract over a half a million dollars from President Trump’s campaign, it was a much different bill for a “healthcare” rally featuring then President Barack Obama in 2009. The event was also held at the Target Center, but the tally for extra security was a measly $20,000, less than 5% of what was charged for this event.

Despite the dispute over payment, Minneapolis police promised a “highly visible and robust” police presence for the President’s rally. Unfortunately, for Trump supporters leaving the rally, police protection was seriously lacking outside the arena.

After the speech, hundreds of enraged left-wing protesters attacked Trump supporters. One rally attendee was hit by a pile of garbage and slapped in the face.  Over three dozen “Make America Great Again” hats were stolen and set ablaze in an eerie street bonfire. Among the ashes were vicious Trump hating signs.

Other members of the leftist mob overturned barricades, while some chased Trump supporters and even harassed innocent bystanders. One local resident, Kali Finch, did not attend the rally, but was in the wrong place at the wrong time. She was trying to move through the area with her brother but was “shoved” and called a “racist” by numerous members of the left-wing mob.

Ironically, liberal Democrat Mayor Jacob Frey proclaimed that Thursday would be “Love Trumps Hate Day.” However, for the street thugs, there was no “love,” only “hate” toward the President and his supporters.

This type of chaos has been seen around the country after Trump rallies and at numerous Antifa marches. The perpetrators of the violence are almost always left-wing agitators, not Trump supporters. Most are young, white liberals who are brimming with hate, undoubtedly fueled by indoctrination at colleges and universities across the country. Too many of these institutions of higher learning do not welcome open debate or discussion and discriminate against conservative speakers and professors. Instead, students are exposed to a steady diet of progressive ideas taught by instructors that are almost universally liberal.

Mixed among the throng of anti-Trump protesters in Minneapolis were rabid communists. In fact, one protester was emboldened enough to wave the flag of the People’s Republic of China. It was reprehensible for this anti-Trump maniac to show such support for the communist Chinese. Currently, the government is repressing and brutalizing the courageous demonstrators in Hong Kong, who are fighting for freedom and singing our National Anthem.

As the flag of communist China was being paraded around the streets of Minneapolis by Antifa thugs, Trump supporters were waving American flags inside the Target Center. This contrast is indicative of what American voters will be facing in the 2020 election. It will be an election of contrasts: change agents vs. the swamp; socialism vs. capitalism; and pro-America vs. anti-America.

In the 2020 election, our nation’s voters will have to decide what type of behavior to reward. If we elect as our next President a “woke” progressive, who is supported by the type of anti-American Antifa thugs who protested outside the Target Center, our future will be bleak both economically and culturally.

Let’s hope that America rejects that type of radicalism and re-elects Donald Trump, a President who loves this country and understands why protesters halfway around the world are risking everything to wave our flag and sing our National Anthem.