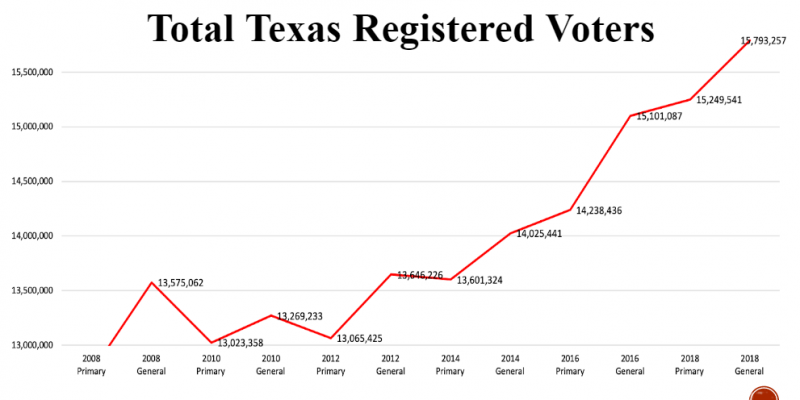 Expanding the base is the only way to protect the lead Republicans still enjoy in the Lone Star State, especially in Texas’s most-populated 41 counties, he said.

“Recruitment is a part of our DNA,” Dickey said, laying out the details of the Texas GOP’s Red Alert initiative to the Travis County Republican Party‘s executive committee Tuesday evening.

As far as the state party’s role in this, Dickey said the hiring and training of field staff is underway, with 2019 goals being exceeded. Field staff have been deployed to Houston, San Antonio, the Rio Grande Valley, Dallas-Fort Worth, and El Paso, with a focus on recruiting black, Hispanic, and Asian voters.

An effort to recruit challengers for all Democrats in top races is also in place, which (assuming each respective candidate knocks the doors and make the calls) will help in finding new voters, and perhaps in converting some.

In addition, Dickey noted, the Texas GOP is working with Leadership Institute to train the grassroots — not just candidates or party staff. So far, 1,400 grassroots volunteers have been briefed on how to effectively register new voters and reach their neighborhoods for candidates. A key part of this training has been showing attendees how to leverage voter data apps, which can utilize residential data and cell phone numbers in ways not easily possible in previous elections. As one example of the new capability: a block-walker who knocks a door to find no one is home (or the resident is unwilling to answer the door) may send a text message to a number on record, apologizing for the missed connection.

“Bringing voter registration into our DNA is a major part of this,” Dickey said, unveiling another indispensable part of the strategy. With that, Dickey announced a text number (TXVOTE to 72000) for prospective voters to request a voter registration card be mailed to them.

From the hip: Though Democrat and mainstream media prognostications of a “blue wave” have come up short, the call for voter recruitment is nonetheless urgent for Republicans.

Dickey noted that the total number of registered voters in Texas hit a recent nadir during the 2010 primaries with roughly 13 million credentialed voters (see chart below).

By the 2018 general election, that Texas registration figure soared by nearly 3 million to 15.8 million. A good share of that has been generated by not only rapid population growth but Republican operatives and volunteers campaigning for any number of GOP candidates — such as Ted Cruz, Donald Trump, or even Bobby Jindal — seeking to unseat or succeed Barack Obama. But here’s the other side to that: a big part of that 3 million are also Democrats who were excited about a 2016 candidate –such as Bernie Sanders or Hillary Clinton — or who have a disdain President Trump propelling them to action.

Keeping up with that upward trend of voter involvement and interest is critical. Merely “keeping Texas red” is no longer enough if Texas Republicans hope to hold on to power or make Texas redder. They must expand on the lead they enjoy, or statewide 2020 candidates may go the way of judicial candidates in 2018 when the Democrats swept. 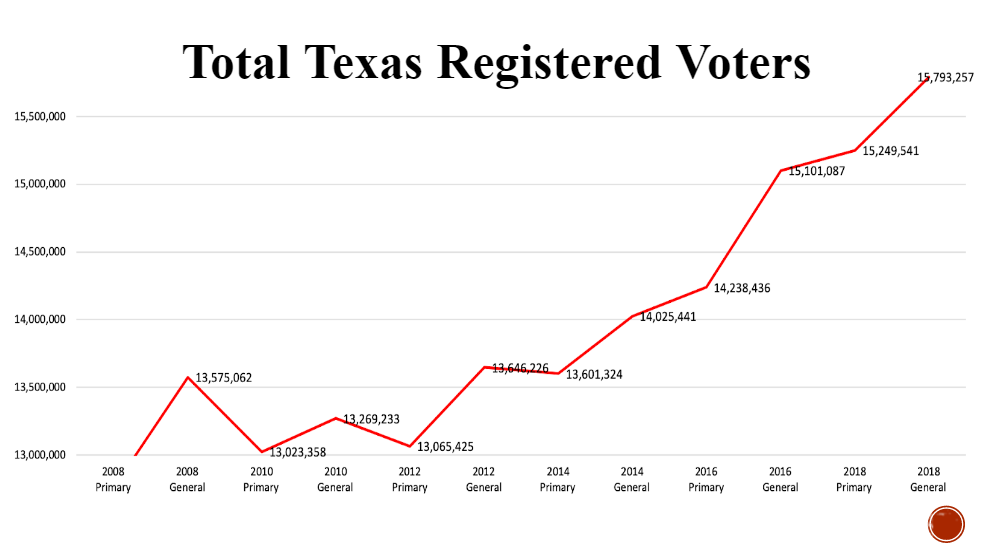 This is Part 3 of a series on Dickey’s Red Alert plan. See Part 1 here.

Interested in more news from Texas? We've got you covered! See More Texas News
Previous Article This E-Mail Shows How Desperate The Trial Bar Is To Save John Bel Edwards
Next Article Starting teachers in Texas averaged $41,481 in 2017-18