Here’s our election night coverage, which will simply consist of rolling updates until all the returns are in. Analysis will come Sunday, after we’ve had a chance to sleep on what we’ve seen tonight.

We’re going to call it a night and have some more in-depth thoughts throughout the day tomorrow. 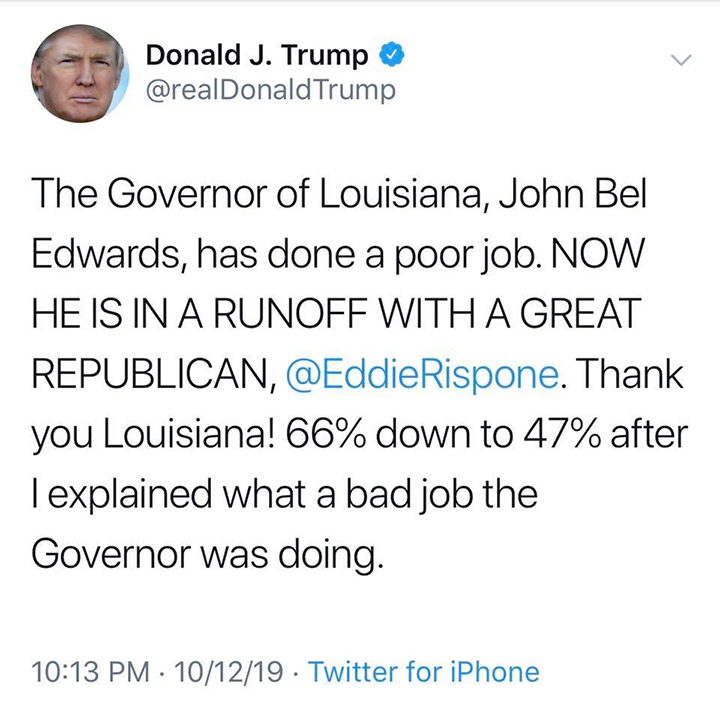 10:03 p.m. – We’ll have a more complete rundown on legislative races later, but for now, a few highlights from the Senate.

And St. George has passed with 54 percent of the vote.

9:35 p.m. – All the votes are counted in Tangipahoa Parish. John Bel Edwards only got 48 percent there.

He’s sitting at 45 percent statewide. 78 percent of the votes counted.

Edwards picked up 57 percent in East Baton Rouge, but he got killed in Livingston. Just 28 percent, while Rispone tore it up with 52 percent there.

Part of the reason Abraham is so far a little ahead of Rispone is some of the rural North Louisiana vote where he’s been very strong.

8:50 p.m. – The early vote from Bossier Parish is in. Eddie Rispone is at 37 percent, Abraham at 36…and Edwards at 25. That would not bode all that well for Edwards topping 50 percent tonight. But we’ll see.

8:45 p.m. – The Orleans early voting number came in and it pushed Edwards to 47 percent. He had 89 percent of the early voting in Orleans.

8:40 p.m. – More parish early voting numbers indicate a lot of difficulty for Edwards to get to 50.

He’s at 40 percent in Allen Parish.
In Catahoula Parish he got 22.
In Avoyelles, he’s at 37.
He’s at 45 in Calcasieu.
In Claiborne Parish, 38.
31 in Concordia.
In DeSoto, 46. Which is a pretty good result for him, but not amazingly so.
He was at 58 percent in East Carroll, which is a good number but one he’s supposed to have.
52 in East Feliciana, which is pretty good.
In Evangeline, 39 percent.

8:28 p.m. – It looks like the early voting in the southwestern part of the state was a disaster for Edwards.

8:22 p.m. – A couple of other parishes of note have early-vote numbers posted. 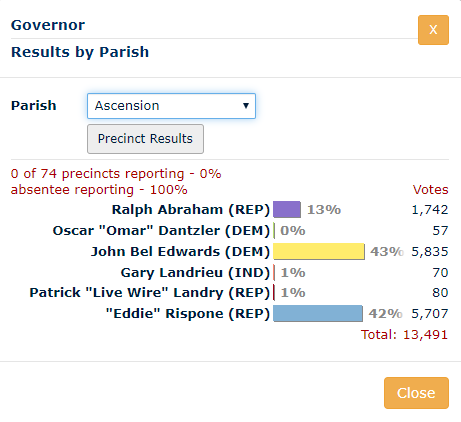 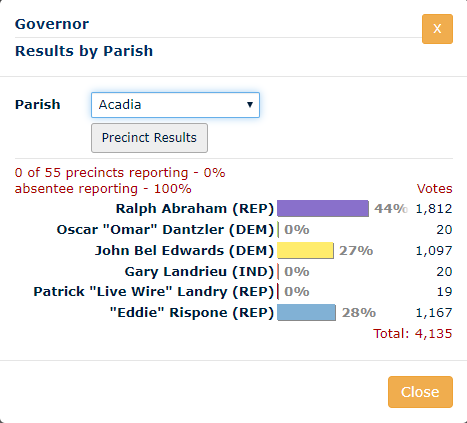 8:18 p.m. – Among the parishes whose early votes are in was Jefferson, and Edwards’ numbers are strong there… 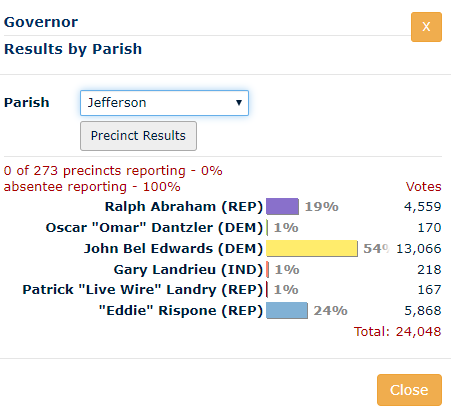 That was enough for Gambit Weekly’s Clancy DuBos, who is more or less an Edwards homer, to call the race for Edwards. We’ll see if he’s right.

8:14 p.m. – Updated governor’s race numbers indicate that Ralph Abraham might well have won the early voting over Eddie Rispone, and the early voting definitely reflects John Bel Edwards falling short of 50 percent (depending which parishes’ early votes are still out)…

Also, it looks like Amendment 3 of the constitutional amendments might pass, but none of the others will… 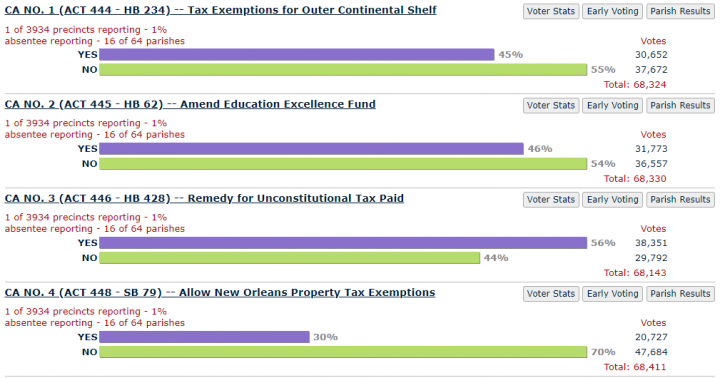 7:49 p.m. – Yes, we are watching the LSU-Florida game. First quarter just ended with the Tigers and Gators tied, 7-7.

Nothing just yet to really report, other than a continuation of turnout buzz to the effect that Baton Rouge and New Orleans turnout has been soft, particularly in the black precincts, while rural parishes have been hot and heavy all day. Overall, though, the expectation seems to be that turnout is weak today – meaning that if those stories are true the early voting numbers will significantly affect the overall electorate. And if that’s the case, there will be more Republicans and fewer black voters this cycle than in 2015.

7:03 p.m. – There is a little bit of buzz out there that black turnout in Baton Rouge and New Orleans has been very soft.

That said, apparently it wasn’t for a lack of Democrats trying. This is illegal, no?

6:58 p.m. – On the Republican side there was this, as a follow-up to President Trump’s visit… 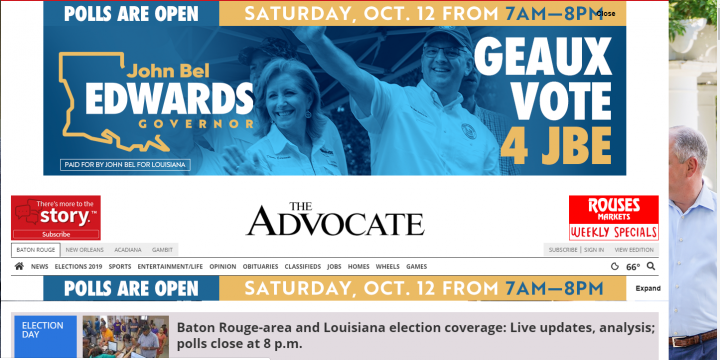 6:30 p.m. – Word is that John Bel Edwards’ camp has internal polling which says he’s going to get 52 percent tonight. No public polls show that other than the one Verne Kennedy has been doing. Our take is that polling simply isn’t reliable because busy people don’t answer the phone for polls, and our theory is that as a result of that phenomenon the polls are greatly undersampling the state’s conservative voters.

But we’ll find out.

Meanwhile, yesterday here was a release of a poll saying something entirely different…

New Orleans: Louisiana voters who didn’t early vote head to the polls tomorrow to decide on either the status quo or a new direction for the next four years.  President Trump recently targeted Louisiana Governor John Bel Edwards for defeat after Edwards falsely claimed that tariffs were to blame for a steel plant shuttering in south Louisiana last week, laying off nearly 400 workers without warning.  It was later announced by the company that finances and unsustainable debt forced the decision.

Many polls have been released in the last few weeks, mostly by the campaigns or close connections to the campaigns. While Governor Edwards has remained in first place, his prospects of avoiding a runoff have waned in the last couple of weeks as his numbers have dipped into the low 40s and continue to fall.  There have been a few backs and forth about which Republican will take the coveted second place runoff spot, with both Congressman Ralph Abraham and businessman Eddie Rispone releasing polls showing that they each had the inside track.

Last June, the left-leaning FiveThirtyEight polling company published a survey showing that President Trump’s approval rating in Louisiana had fallen to 47% from the 58% of the vote he captured in the Bayou State in 2016.  FiveThirtyEight famously predicted in 2016 that Trump’s chances of winning the presidential election were less than 1%.

When President Trump announced that he would be holding an election eve rally in Lake Charles, the Louisiana Co-Chairman for the Trump Campaign, Brian Trascher, commissioned a poll whose results will be delivered to President Trump Friday night prior to the Lake Charles event. “Before taking the stage, we wanted the President to see a poll that captures the most up-to-date and independently accurate status of the Gubernatorial race, as well as a more realistic picture of his own popularity in Louisiana,” said Trascher.

In a survey of 700 Louisiana likely voters, the poll found that roughly 69% of respondents either strongly or somewhat approved of President Trump’s job performance.  Nearly 67% said that that would be either more or somewhat more likely to vote for a candidate who supports Trump.  Roughly 67% support the appointment of Supreme Court Justice Brett Kavanaugh, whose confirmation turned into a circus last year amid decades-old allegations of sexual assault from several accusers that never fully materialized.   Governor John Bel Edwards enjoys a 53-45% job approval/disapproval rating in this poll.  However, when asked about their choice for Governor between the incumbent and his two major Republican challengers, Governor Edwards was chosen by only 39% of respondents.  26% chose Congressman Ralph Abraham, 25% chose Eddie Rispone, and 10% remain undecided.  When pitted head to head, both Abraham and Rispone narrowly bested the Democrat incumbent Edwards, but within the margin of error.

Another interesting question dealt with voter support for Common Core, the unpopular new teaching curriculum rolled out by the federal government during the Obama administration.  Candidate Eddie Rispone funded the effort to implement Common Core and even fought attempts to eliminate it by the Louisiana Legislature.   Congressman Ralph Abraham has stated publicly that he opposes Common Core and would work to eliminate it from Louisiana schools if elected governor.  57% of poll respondents indicated that they were either much less or somewhat less likely to vote for a candidate who supports keeping Common Core in Louisiana schools, though it has not been a major issue in the race thus far.

This poll of 700 likely Louisiana voters was commissioned by Gulf South Strategies USA, LLC, based in New Orleans, and conducted by Spry Strategies, based in Tennessee.  The interviews were conducted by phone between October 8-9, 2019 by both IVR and live calls.  The respondents self-identified as 44% Democrat, 42% Republican, 14% other party.  56% identified as female, 44% as male, and 0% as other.  73% identified as Caucasian, 25% as African American, and 2% as Hispanic or other.  The voter turnout model was divided by DMA and took into account hotly contested down ballot races in the Acadiana region, and a major statewide candidate from north Louisiana for the first time in many cycles driving turnout slightly above average in those markets.  The lack of many contested down ballot races in the New Orleans market, paired with a below average voter enthusiasm index weighted that region slightly below average.  However, these turnout model adjustments do not affect the final numbers outside the margin of error, which is +/-3.7.  The remaining crosstabs can be found in the attached report.

Then there was this today…

Ralph Abraham’s camp posted that on YouTube, with the statement that it proves Edwards’ team is nervous about the race. We wouldn’t say that; what we would say is Edwards’ team is putting an awful lot of stock into trying to top 50 percent tonight, just as the Republicans are hell-bent on extending this to a runoff that either Abraham or Eddie Rispone will be in a lot better position to win than either are tonight.

The second most important item on the ballot might be the St. George incorporation in East Baton Rouge Parish, because if it passes it will make for possibly the most interesting development in Louisiana politics on the local level in three decades. We’re told internal polling on St. George has passage of the incorporation pulling some 57 percent on the strength of the early vote.

We’ll see if any of this information pans out once the polls close and the votes start to get counted.