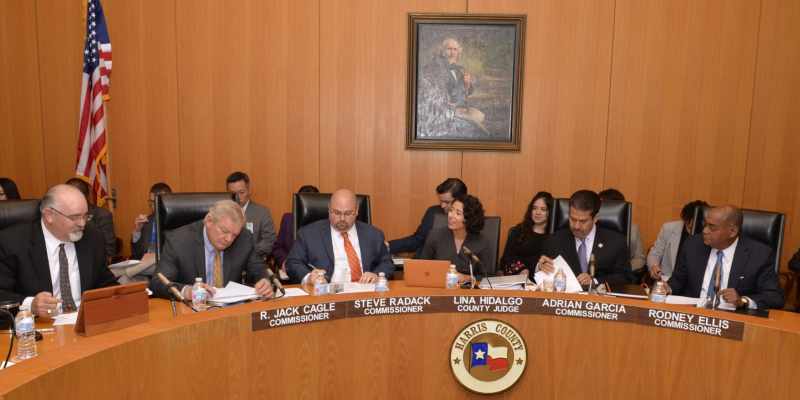 Harris County Commissioners Steve Radack and Jack Cagle effectively blocked a 7.9 percent property tax hike Tuesday by not attending the meeting where a vote on the proposal was to take place.

Five members of the commissioners court represent the primary governing body of Harris County, which encompasses Houston. State law requires a quorum be met for the court to vote on any tax increase – 4 of the 5 members must be present to vote. If the court cannot meet quorum, there can be no tax increase.

Three members supporting the 7.9 percent tax hike are Democrats; two opposing are Republicans Radack and Cagle. In order to ensure no tax increases, both Republicans skipped the vote. Last week, Radack told News 88.7 he planned on attending, while Cagle’s spokesperson declined to comment if he would show up.

The proposed tax increase will now revert to the “effective tax rate” or “no new revenue rate,” of 61.17 cents per $100 assessed property valuation, according to the Harris County Budget Office.

“This is taxpayers’ money, not the government’s,” Cagle said after Tuesday’s meeting.

A new property tax law passed by the Legislature earlier this year caps property tax increases beginning next year at two and 3.5 percent depending on population and municipality.

“Although proponents of this tax increase tried to couch it in terms of public safety and flood prevention, the truth is that only 5.5 percent of that revenue would have gone toward flood control,” he added. “Most of it would have drained into the county’s general fund for members of the court majority to spend as they like. I believe we owe our constituents better transparency.”

County Judge Lina Hidalgo criticized the move, saying, “Unfortunately, today commissioners Cagle and Radack chose to hide rather than face the tough reality of the impact that extreme revenue caps will have on our county.”

Precinct 2 Commissioner Adrian Garcia said he was disappointed that they couldn’t increase taxes, saying the proposed increase of 7.9 percent “was a modest and responsible investment that would allow us to continue to provide services and protect our community.”

Last month, a similar maneuver was used by two Lubbock County commissioners, who also blocked a tax increase by avoiding a required quorum.

Lubbock Commissioner Chad Seay stood behind his March 2019 testimony he gave before the House Ways and Means Committee when it was considering the property tax bill.

He testified, “I think if I’m going to raise your taxes as a citizen of Lubbock County, I ought to have to come ask you for it.”

After Seay and commissioner Jason Corley worked with county staff to cut spending and reallocate resources to the office with the greatest need, the sheriff’s office, three other members of the court decided instead to propose increasing property taxes by 5.47 percent, or $3.8 million more in property taxes than the previous year.

Seay and Corley released a video before their county’s meeting, explaining why they couldn’t vote for the increase and instead chose to block the quorum.