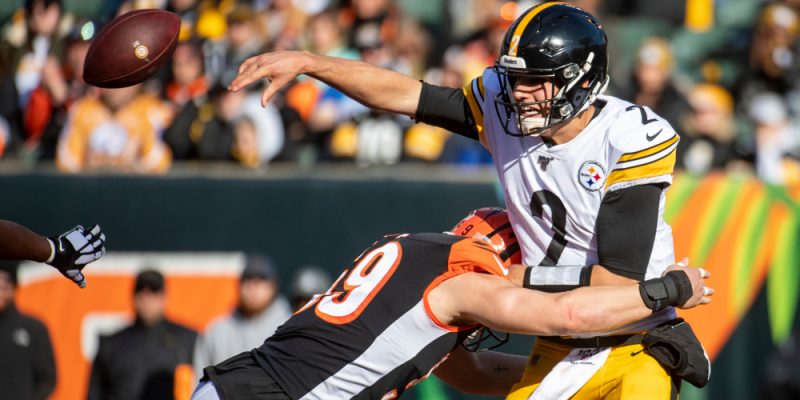 It was indeed a turbulent week for Pittsburgh Steeler quarterback Mason Rudolph.

It got only worse on Sunday

Mere days after being accused of hurling a racial slur at Cleveland Browns defensive end Myles Garrett, Rudolph was ineffective through two-plus quarters against the winless Cincinnati Bengals and was replaced by Devlin “Duck” Hodges. Rudolph completed just 8 of 16 passes for 85 yards. He played one series in the third quarter when head coach Mike Tomlin had seen enough.

“Just felt like our offense needed a spark,” Tomlin said. “Mason wasn’t doing enough; Duck came in and provided us with a spark, made a couple plays. We’ll see what next week holds, next week. But I like the contributions of Duck; I like his readiness; I appreciate the efforts of Mason and also appreciate the support of Mason after we made the change.”

Last Thursday, Garrett appealed his indefinite suspension for ripping off Rudolph’s helmet and slamming it into Rudolph’s head at the end of the Steelers-Browns game on November 14. As part of the appeal, Garrett accused Rudolph of hurling an undisclosed racial slur at him which triggered the brawl. The NFL denied his appeal and found no evidence of Garrett’s accusation.

While many commentators criticized the NFL for not suspending Rudolph too, on Saturday the second-year quarterback out of Oklahoma State was levied a $50,000 fine, the highest among players in the brawl. Because Rudolph is still in the midst of his rookie contract, the fine is worth more than he makes in one game.

Rudolph had said earlier last week that he would accept any punishment the NFL deemed fit.

“I have no ill will toward Myles Garrett. Great respect for his ability as a player. And I know that if Myles could go back, he would handle the situation differently. As for my involvement last week, there’s no acceptable excuse. The bottom line is I should’ve done a better job keeping my composure in that situation. [I fell] short of what I believe it means to be a Pittsburgh Steeler and a member of the NFL.”

Rudolph denied that the stormy circumstances surrounding the brawl had anything to do with his abysmal performance on Sunday.

“I think I do a good job of shutting that stuff out,” he said. “And this was just purely–not moving the ball up and down the field.”

This may be true, but Rudolph must take a long hard look in the mirror if he is to stick around in this league. Given the fraternity-oriented culture of the NFL, even if the racial accusation isn’t true, the stigma itself will make for a short leash if his play on the field doesn’t improve, and improve quickly.