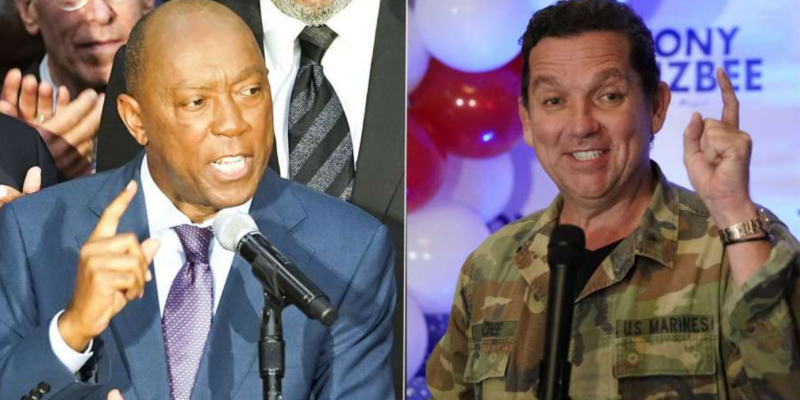 With nearly all voting centers reporting, incumbent Houston Mayor Sylvester Turner fell 7,700 votes short of reaching more than 50 percent of the vote in a race against 11 challengers.

Turner, a Democrat, will face runner-up Tony Buzbee, a high-profile attorney and decorated U.S. Marine, in a Dec. 14 runoff election. An Independent and political outsider, Buzbee received 28 percent of the vote.

“The pay-to-play system and corruption at City Hall must be stopped,” Buzbee’s campaign said.

Buzbee accepted no campaign donations and sought no endorsements. If elected, he pledged to donate his salary to charitable causes. Buzbee funded his campaign with about $10 million of his own money.

Turner received 47 percent of the vote in unofficial returns, with businessman Bill King trailing in third with 14 percent. King narrowly lost to Turner in the 2015 mayoral runoff.

Harris County numbers were not released until about 6:30 a.m. Wednesday.

Turner has come under fire for his management of city finances, rising crime and wasted or mismanaged money intended for post-Harvey flood mitigation efforts, which went elsewhere or disappeared. As a result, Gov. Greg Abbott announced last month that the state, not cities and counties, will manage $4.3 billion in recovery post-Harvey aid.

Texas Land Commissioner George P. Bush will lead the program once federal money comes in in about nine months, focusing on large-scale regional projects, the governor’s office said. Texas has been waiting for federal funding since February 2018, when Congress first approved the disaster mitigation program.

“Houston and Harris County have proven that they are unable to ensure victims are receiving resources in a timely manner,” Abbott spokesman John Wittman said.

Turner says the city is hamstrung by state administration and approval of federal funding.

“Everything that local governments do in this regard must first be approved by the state,” Turner said. “When we are forced to seek approval from the state before we can spend a dollar to repair or reconstruct a single home or issue a reimbursement check, it is disingenuous for the state to blame local governments.”

He also said the state taking over funding was a way to use the money for places other than Houston.

Buzbee points to a drainage fee and an ad valorem tax Houston voters approved more than 10 years ago to help with flood mitigation as one of many examples of mismanaged funds. Since that initial vote, the city has collected more than a billion dollars, Buzbee notes, but only a small percentage of it was ever used for drainage projects. Instead, it was redirected to the general fund and used to pay for city operations.

“Houston’s own ‘Flood Czar’ admits we are in no better condition to face the next storm than we were before Hurricane Harvey,” Buzbee said.

But Turner calls the state takeover of disaster funding a money grab.

“The state has failed to expedite previous spending – Houston is still getting money for Ike recovery,” he said. “This is a money grab by the state to spend it in places outside Houston and Harris County.”

Abbott responded by tweeting, “Mayor you DEMANDED that Houston get its own allocation of over $1 billion in federal funds to rebuild housing. You’ve rebuilt less than 10. Where did all the money go? During that same time, the General Land Office has rebuilt almost 1,000. The GLO didn’t slow you down. You did.”

If elected, Buzbee said he would make Houston finances fully transparent by creating a website showing where all tax dollars go, and he plans to hire an independent auditor.

Turner told reporters he anticipates winning the run-off, saying he’s been through this before and won in 2015.