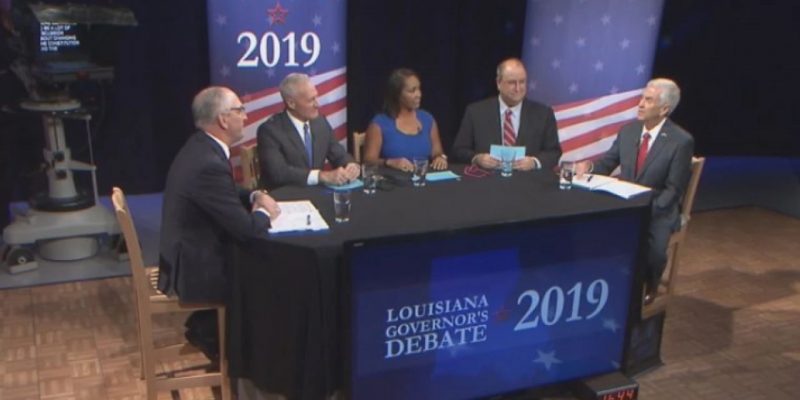 Up to that point, the Edwards reelection camp had brought to battle some weaponry of questionable effectiveness in its quest to outpace Republican businessman Eddie Rispone in the runoff. It has replicated the 2015 playbook in attacking your runoff opponent, but this time with a distinct lack of ammunition. So, it has treated the public to ranting about Rispone’s ties to someone who similarly has donated copiously to conservative candidates, complaining that Rispone wouldn’t show up to every single candidate forum that issued invitations, and asserting that voters don’t know what they would get with Rispone in the Governor’s Mansion. In turn, this makes Rispone, according to Edwards, allied with corruption, shirking his duties, and too much of a risk in office.

These charges are, of course, nonsense, but they do serve the purpose of distracting from Edwards’ dismal record in office with – considering Louisiana can’t create jobs under his watch, its economic growth remains anemic compared to other states, it lags behind them as well with one of the highest unemployment rates in the nation, and on a per capita basis had a higher net population loss last year than all but one state. Meanwhile, taxes were raised that cost Louisianans over $4 billion more over the course of Edwards’ term while spending from state sources increased at almost twice the rate of inflation.

Naturally, and on display at the debate, Edwards cherry-picks the few, largely meaningless picayunish statistics that run counter to the negative big picture (such as celebrating a dead cat bounce by saying for just one recent quarter the state’s economy grew faster than in most states; regression to the mean inevitably happens but doesn’t indicate a trend). But his campaign spends as much effort on trying to trash Rispone on phantom criteria, which Edwards again pursued almost pathologically throughout the televised forum.

In fact, viewers with no interest in Louisiana politics perhaps looking for the decisive seventh game of the World Series who stumbled across the debate might have gotten sucked into it momentarily at the sight of a wildly expressive, eyes bulging with excitement, well-dressed figure remonstrating furiously, interrupting often, and constantly complaining. They would have been surprised to know this panicked visage was that of the state’s 56th governor, looking for all the world like a backwoods Tangipahoa politician trying to gin up impressionable voters – and failing.

For the first two media questions, Rispone looked and sounded far cooler and in control than the maniac next to him. Edwards calmed down afterwards, but then towards the end had something happen indescribable except as a meltdown when Rispone needled Edwards’ on his inability to achieve fiscal reform other than by raising the sales tax. If Edwards – who a number of legislators privately admit flies into rages when he can’t bully them into toeing his line – acted this way in the Army, he couldn’t be entrusted to lead effectively even a phalanx of toilet attendants.

All in all, when considering polls show Edwards can’t reach 50 percent of the intended vote – and keep in mind these have undercounted Rispone’s support a bit and of those who claim undecided status in these most will vote for the challenger and the rest generally won’t show up – Edwards’ insistence on more and more debates (challengers typically want that in order to try to catch an incumbent perceived race leader into making a gaffe), and his attack strategy and unhinged debate behavior, seasoned campaign observers know indicate a candidate who thinks he’s behind and can’t win without something big and fortunate happening for him.

This standoff covered almost entirely the same ground as past efforts, save a startling admission by Edwards: he thinks Louisianans aren’t taxed enough. Referring back to a Tax Foundation report using 2012 data that showed the state with one of the lowest tax burdens – even as the interest group publicly has rebuked Edwards for using old data while more recent studies by other organizations put the state in the middle – he claimed there was room to grow on that.

Interestingly, Rispone’s one blunder of the night occurred when he mixed up this study with the most recent U.S. News annual Best States survey that keeps putting Louisiana last, although Rispone later corrected himself. Yet it wouldn’t be a 2019 debate without an Edwards fib, and this time it came over that study, which Edwards alleged used data from 2014-16 – basically, before he got things going as governor. In fact, the earliest data that study uses come from 2015 and most are in the 2017-18 period; for example, on the economy where Louisiana finished 49th, growth used 2017 data, employment 2017 and 2018 data, and business environment 2017 and 2018 data. Edwards is a bald-faced liar; with his policies he owns this awful ranking.

Maybe it’s internal polling data telling him this, or vibes he’s getting out on the campaign trail, but, from wherever, Edwards’ behavior during the debate showed all the hallmarks of somebody running behind and desperate to catch up. If that’s what he thinks, be prepared for his campaign to deliver a fortnight of obfuscation, distortion, extreme exaggerated hyperbole but, most of all, plain nastiness.

Interested in more national news? We've got you covered! See More National News
Previous Article News, Notes And Video From Around The Louisiana Election Scene
Next Article JBE Accuses Rispone Of Being A “Walking Special Interest,” But Look Who’s Donating To Gumbo PAC